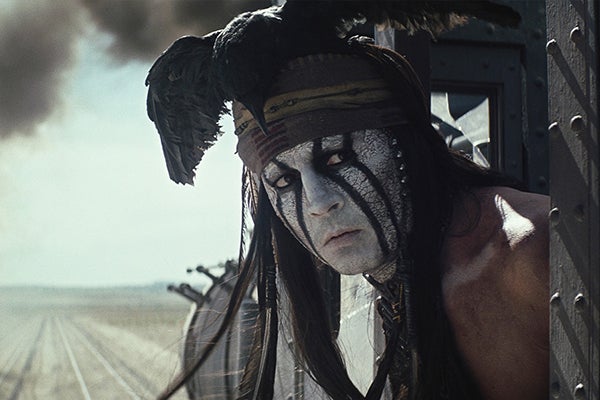 Johnny Depp is a man of many traits, but cocky is not one of them. Well, unless you consider his $20 million asking fee cocky (we'd just call it a flat rate). Other than that, he does his work and then disappears, only to return again in some Tim Burton creation or another odd but ceaselessly fascinating story. He's become the go-to actor for the slightly deranged, smooth-talking character much like his actress counterpart (and Burton's wife), Helena Bonham Carter. Like her, however, there's much more to his resume than pirates, drunks, and recluses. He's proven himself to be a man of many faces — one that was almost squashed on set of his latest adventure, The Lone Ranger.
Advertisement
Depp's portrayal of Tonto, the Native American hero in Gore Verbinski's re-imagining of The Lone Ranger, has been riddled with controversy: Some say it's in poor taste while others believe it's downright racist; others still think it's a perfectly respectful portrayal. Whatever side you're on (or if you chose the route of indifference), we wanted to figure out what the inspiration behind the character was right from the source — who, having just turned 50, had some opinions that were of special interest to us (albeit short and sweet). Read on and see for yourself...because who knows when we'll hear from Depp again?

Do you ever feel like the Lone Ranger of Hollywood? Do you ever get the urge to wear a mask and go places without being recognized?

“I have worn ridiculous things in order to go out in public every now and then. You know, you glue on a fake nose and a kind of ZZ Top beard, bandana over your head kind of deal. I’ve always just done whatever — whether it’s the weathered roadie look or not. I’m lucky to be in the game without having to play the game too much, you know?”

“I had seen a painting of a warrior with stripes down his face before filming began. He had stripes painted on his face that were slightly similar to the ones we used for Tonto. The lines are what interested me; it was like seeing four sections of the man, like he was dissected, or something. There was a crow flying behind him in the painting. At first glance, I thought the crow was on his head, but it wasn’t. I used that as inspiration, though. I decided that the best thing to do was to take a dead bird and put it on top of my head as a kind of spirit guide. Everyone should try it, by the way. It’s really something else.”

What’s so attractive about playing an outlaw?

“Well, outlaws are fun. They get to do things that we can’t. Yeah, they break the rules, but that vicarious thrill in doing so is addicting. There was a horseback riding accident while on set, for instance. The horse had it out for me. We’d been running the horses pretty hard that day and went down a couple of paths. When we changed paths to get closer to the camera car, the horses were still running real fast behind us, and Scout (the horse I was on) decided to jump over a couple of obstacles. I really don’t know what happened, it was all very fast and very slow. The weird thing is, however, there was no fear or adrenaline — I remember the whole thing clearly. Scout had incredibly muscular front legs, and he was moving at a very dangerous speed, and there I was still holding on to his mane, trying, like an idiot, to get back up. At a certain point you have to make a decision: Do you hit the deck, or do you wait for a hoof to split your face in two? I chose to fall on my own. Scout lifted his front legs and narrowly missed me. He could’ve crushed me in a second.”

Did you go to hospital?

“Nope! I just stood right up. I don’t know why — the pain will probably come later.”

The mannerisms of Tonto and Captain Jack Sparrow are pretty similar. Was it difficult to not see the two characters in a similar light?

“That was one of the problems — he’s still in there. He never goes away, really. That’s the problem with the characters you’ve gotten to know. I made a choice a long time ago that I was better off not watching my films, which is a drag because you miss out on a lot of your friends’ incredible work, but I’d rather stay as ignorant as possible about the results of anything because once you’re done playing that character, it’s really none of your business anymore. The director and editor are going to take your work and twist it to their liking, anyway. My job is really to give options to the director. I prefer to walk away with the experience of the process, rather than the results.”

We hear you’re directing a Keith Richards documentary. Can you tell us about that?

“I’ve been working on this project for about the last four years or so. We’ve just completed the filming part. We see it as a way for the public to experience Keith because he’s quite a mysterious being. Essentially, it’s Keith and I sitting around having a conversation. What it boils down to — what the gusto of the project is his wisdom, his philosophy, and his experiences. Obviously that’ll be intercut with scenes from his life.”

Finally, you just celebrated your birthday. What are your thoughts on turning 50?

Entertainment
Don’t Freak Out — The ICarly Reboot Is Almost Here
Hollywood is loving the concept of a modern-day reimagining of a classic television series so much that it is tapping into a number of old favorites to reb
by Ineye Komonibo
Movies
The Woman In The Window Filled Its Cast With Oscar Nominee...
by Olivia Truffaut-Wong
Celebrity Couples
What’s Going On With Olivia Munn & John Mulaney?
Just days after confirming that his marriage to Anne Marie Tendler had come to an end, John Mulaney’s love life has a surprising new update that involves
by Ineye Komonibo
Advertisement
TV Shows
Does It Even Make Sense To Look For A “drivers license̶...
We’re all in this together… searching for references to the Joshua Bassett and Olivia Rodrigo chatter from early 2021 in the new season of High
by Martha Sorren
Best of Netflix
The 13 Most Anticipated Netflix Summer Movies Of 2021
by Lia Beck
Best of Netflix
Everyone Is At Home Watching These 10 Shows & Movies On Netflix R...
by Ineye Komonibo
Movies
I Still Can’t Stop Thinking About The Last Two Seconds Of <...
I first saw Saint Maud on March 4, 2020 in a screening room in midtown Manhattan, six days before the Refinery29 office — and soon the rest of New York C
by Anne Cohen
TV Shows
Before High School Musical, Olivia Rodrigo Was The OG Nick...
Everything comes back to New Girl. Joe Biden wins the presidency after days of nail-biting anticipation? New Girl saw it coming. Taylor Swift drops a wistf
by Ariana Romero
TV Shows
What To Expect From Amazon’s New Series The Underground ...
Content warning: Descriptions of violence and mild spoilers are ahead. As far as Amazon Prime’s newest drama The Underground Railroad is concerned, peopl
by Asia Ewart
Best of Netflix
The Halston Cast Look So Much Like The Real People In The ...
by Rachel Paige
TV Shows
You Have 10 New Netflix Treats To Stream This Weekend — Here’s Wh...
by Ariana Romero
Best of Netflix
R29 Recaps: Every Episode Of Netflix’s Halston
The new Netflix limited series Halston takes a closer look at the man, the myth, the fashion legend born Roy Halston Frowick. Of course, the world knows hi
by Shannon Carlin
Advertisement
Advertisement
Discover
R29 Stories & News
Watch
R29 Original Series & Films
Shop
R29's Most Wanted