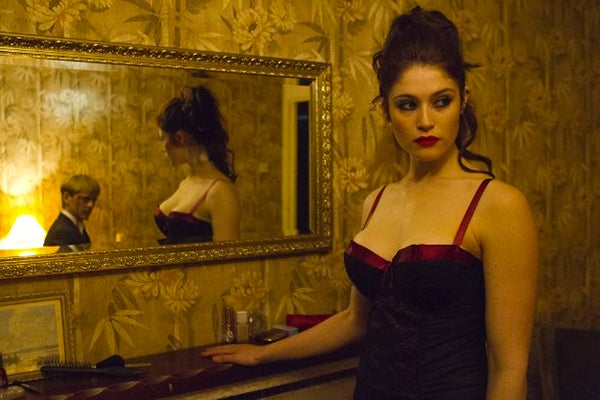 Hollywood had better be prepared for the rise of Gemma Arterton. The theater-turned-film actress has already proven she can kick some action hero butt like 007, and already has two British Academy of Film and Television Arts nominations under her belt. For a girl whose resume is only beginning, that's pretty darn impressive. Oh, and not to mention, she's absolutely stunning.
Avon made a good call in making her the face of its beauty line. Her flawlessly fair skin is almost as famous as her acting ability, and she makes good use of both in her latest film, Byzantium. Arterton plays Clara, a hyper-sexual vampire trying to outrun her 200-year history. Arterton's personal history doesn't run that deep, but it does extend into the theater world, where she hopes to end up after her stint in film is done (but that won't be for a long, long time). The girl's got talent, and her infectious personality could put her in the running to be our new BFF, but we won't jump the gun just yet — don't want to scare her off right away.
Advertisement

In Byzantium, your character uses a lot of sexuality and intensity to get her own way. Was that her antiquated view of a woman's options in the world (as opposed to Eleanor, who was much more upfront and honest), or do you think that is still a reality which women have to face?

“No, they don’t. They don’t have to do that at all. She does it because it’s what she knows; it’s her best trick. She knows how to manipulate men sexually. It was just something I decided was her strongest weapon. I think there are definitely women out there who use their sexuality to get what they want, but I don’t think it’s the way. I think having a brain is the best.”

Not to go back in time, but we have to ask: The sexual tension between you and Jake Gyllenhaal in Prince Of Persia was palpable. How was it working with him? How did you guys develop chemistry?

“Yeah, actually the last time I was in New York, we went for dinner. We hadn’t seen each other in a couple of years because he’s been away, and I’ve been away. I was so young when that filmed — 20 or 21. It was a strange time. It was quite a hard movie to make for the both of us, but since then we’ve been getting on really well. He’s just a really lovely guy. He’s very giving. I think he’s a proper actor. He was really sweet.”

What did you learn from him?

“Resilience. I think he’s very resilient, and detailed. Everything matters to him. He’s very attentive. He really takes everything into his own. He’s very responsible, and makes sure everything is right. I tend to be all over the place, and hippie-like, but he always stressed being attentive.”

Does this “hippie” kind of work ethic carry through into your personal style?

“No, I’m not hippie in personal style, but I guess I’m sort of airy. I tend to go with the flow a lot. Sometimes I can be a bit passive. I’m a bit of a contradiction: I’m passive, but very fiery. I started off in the theater, and I’m used to being more actor-y. Film is a lot different, there’s a lot more ego involved. Theater is about doing the right thing and having fun. It’s been a process finding out how it all works.”

Would you ever go back to theater?

“I always want to go back. I’ve always got my finger in the pies. I’m hopefully doing a musical next year, and also a play. I’ve tried to do a play every year, but you have to really, really commit to it. It’s quite hard. For me, my heart is in theater. I’ll always be primarily a theater actor. Film, this is what I’m doing for the moment. I’m doing it because I can, and the opportunities are there, but the theater is where I feel the happiest. My dream is to own my own theater. Ever since I moved to London, I found this theater that’s derelict in South London. I want to buy it and make it into my own theater. That’s my ultimate goal. I think I’m going to do it. I’ve got this feeling I’m going to do it. I want to be the head of my own theater and be an artistic director. That won’t be for a long time, though. I’ve got to finish all this film stuff.” 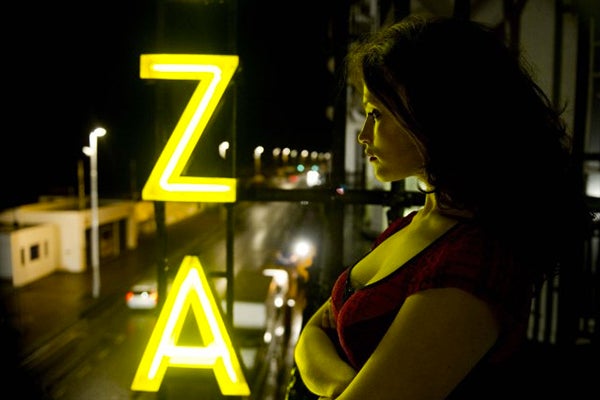 So if a musical is in the future, do you sing? What’s your favorite karaoke song?
“I’m a massive karaoke fan. That’s a hard one because I’ve got a huge repertoire. Usually, someone puts me on the spot and demands I sing something. If I had to choose, I’d do either Bonnie Tyler’s "Total Eclipse of The Heart," or Sinead O'Connor’s "Nothing Compares To You," but that’s more of a downer. That’s more of when everyone’s gone out for a cigarette and I’m up there on my own.”

What’s your go-to product to keep your skin looking so great?

“I use collagen cream. This is a really recent thing, like in the last six months. My facialist told me that when you’re around 25, you stop making collagen — or the production slows down. Collagen is what keeps your skin plump. I use this cream that’s pure collagen, like a sea-based collagen, and I put it on. It’s like food! And almond oil, I love that stuff. I learned that secret from Lady Gaga. I thought, ‘If Lady Gaga can do it, I can do it.”

Are you friends with her?!

What do you carry in your bag at all times?

“Oh, I always carry my notebook. I’m a real writer. I like to write down everything. I also draw as well, so I always have it with me.”

Alright, final question: If Clara took on one of the Twilight vampires, who would win? Why?

“I have no idea! I’m going to say Clara because I’ve seen Twilight. She’s got the power of sexuality.”

Photo: Courtesy of Patrick Redmond/IFC Films.
Celebrity Beauty
J.Lo Showed Off A Blonde Wavy Lob At The AMAs
At last night’s American Music Awards, Jennifer Lopez arrived on the red carpet with a new hairstyle. The blunt honey-blonde lob, styled in wet waves
by Sarah Midkiff
Celebrity Beauty
Is Megan Fox’s New Collarbone Tattoo A Tribute To Machine G...
Over the weekend, Megan Fox and Machine Gun Kelly, also known as Colson Baker, made their first awards show appearance as a couple at the American Music Aw
by Sarah Midkiff
Celebrity Beauty
Naomi Osaka’s Braided Hairstyle Speaks Louder Than Words
“Silence is violence” has been one of the phrases painted on protest signs and written in Instagram posts following the murder of George Floyd.
by Sydney Clarke
Celebrity Beauty
Tayshia Adams Just Got Braids — & Fans Are Loving Her New Look
It was just announced that the new Bachelorette, Tayshia Adams, will present at this Sunday’s American Music Awards. Not only will fans get to see Ad
by Megan Decker
Beauty
Sophie Turner’s Tiny Wrist Tattoo Is A Sweet Tribute To Bab...
Sophie Turner recently added a new tiny tattoo to her growing collection of ink. This design is especially meaningful: a small “W” on her wrist
by Sydney Clarke
Beauty
You Have To See Demi Lovato’s New Side-Shaved Pixie Cut
This week, Demi Lovato has been serving looks. As the host of last Sunday’s People’s Choice Awards, the singer stepped on stage with platinum b
by Megan Decker
Celebrity Beauty
Bella Hadid Is Bringing Back “The Rachel” With Her Ne...
Bella Hadid is bringing us back to the late ’90s and early 2000s with her latest hairstyle, which was directly inspired by “The Rachel” ?
by Sydney Clarke
Celebrity Beauty
Dakota Johnson Ditches Her Signature Highlights For A Rich Winter...
Come fall and winter, there’s an impulse to overhaul your wardrobe, trade your light-wash denim for black jeans and a charcoal wool sweater, and lean
by Megan Decker
Celebrity Beauty
The Crown’s Emma Corrin Proudly Flashes Her Armpit...
Gracing the latest digital cover of Glamour UK, actress Emma Corrin, who stars as Princess Diana in Netflix’s The Crown, proudly poses showing off her ar
by Sarah Midkiff
Celebrity Beauty
Kate Middleton Just Lightened Her Hair With Creamy Bronde Color
Sometimes, the most impactful hair transformations are the subtle ones. Over the weekend, Kate Middleton appeared at a press event for the “Hold Stil
by Sarah Midkiff
Celebrity Beauty
Chrishell Stause Just Made A Major Hair Change — & Looks So Diffe...
Last night at the People’s Choice Awards, Selling Sunset’s Chrishell Stause debuted a brand new hairstyle complete with a fresh color and some very
by Sarah Midkiff
Beauty
Demi Lovato Stuns With Long, Blonde Hair At The People’s Ch...
At last night’s People’s Choice Awards, Demi Lovato stepped onto the red carpet with long dark waves to complement her sparkly copper jumpsuit.
by Sydney Clarke
Discover
R29 Stories & News
Watch
R29 Original Series & Films
Shop
R29's Most Wanted