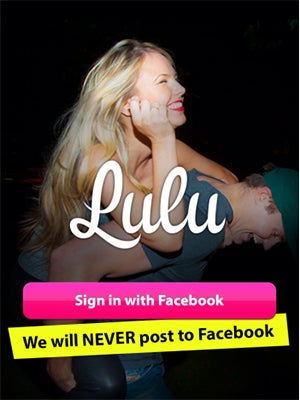 Sex and The City once did an episode where Carrie and Charlotte trolled for men outside a cafe, rating every guy that passed by on a scale of Sleep With to Definitely Not Sleep With. Had that episode occurred in the age of iPhones and apps, all they'd have to do is open Lulu, the new app that lets women secretly score the men in their Facebook network.
Think of Lulu as one big, never-ending gossip sesh with your girlfriends. When women download the app, it syncs with their Facebook friend list and singles out the men (if you're interested in women, you're out of luck, but hopefully that will change). The fellas are rated on a 10-point scale that factors in everything from their bedroom skills to their work ethic. It's not a dating site per se, just a girl's only Hot Or Not. All the dish is on the DL among the girls, but if a guy tries to log on, he's blocked. That is, unless, he invites 25 of his lady friends to join Lulu. Then, and only then, will he be able to see his rating (if he's really hungry for validation, here's a step-by-step guide).
Honestly, though, we find this sort of thing pretty unnecessary. We wouldn't stand for this if it were men rating women, and this is equally annoying if you believe that attractiveness is so much more than a number assigned to a Facebook picture. (Business Insider)

Most Wanted
I Tested A Really Ridiculously Good-Looking Air Conditioner
Window air conditioners are a necessary evil. No matter how heavy, leaky, noisy, energy-sapping, and eyesore-y, these units may be, they’re a summert
by Alexandra Polk
Amazon
Last Chance To Get The Best Prime Day Deals On Apple Products
The overwhelming but oh-so-satisfying sale event of the year is nearly over, and right now we’re focusing on all the best Amazon Prime Day Apple deal
by Alexandra Polk
Amazon
Today’s The Last Day To Check Out Walmart’s Alternative Pri...
If you’re as in sync as we are with the sacred annual calendar of deals, then you’re well aware that today is the last day of Prime Day — and yo
by Mercedes Viera
Advertisement
Most Wanted
The Water Pick That Finally Got Me To Floss
When I think of sparkling, pearly white teeth, two things come to mind. The first is the iconic song from the Fairy OddParents episode where pop singer Chi
by Chichi Offor
Tech
20 Old Computer Games You Completely Forgot About
by Madeline Buxton
Tech
9 Best Travel Tech Products That Make Long Flights A Breeze
You’re reading an On-Site Shopping story — meaning you can browse, add to cart, and actually purchase the product recommendations featured be
by Alexandra Polk
Instagram
Forget “Casual Instagram”. I Miss the Unhinged Instagram of 2012
Today we’re going to take our stupid walk for our stupid mental health down memory lane back to 2012. You pull out your new iPhone 5 from the pocket of y
by Andie Kent
Dedicated Feature
How One Former Beauty Editor Found A New Community Through Video ...
Of the eight “Playroom Rules” my mother kept tacked up for my siblings and me in our childhood home, one in particular always stood out: “In Animal C
by Jennifer Mulrow
Deals
Save Up To $300 On Tech Gifts At Best Buy’s 72-Hour Sale
Extra, extra! Best Buy is holding a major post-Black Friday super sale for only 72 hours. They’ve included every perfect last-minute gift for absolut
by Mercedes Viera
Dedicated Feature
Perfect Gifts For The Most “Online” Gen Z-er (That You Can Buy No...
by Emma Turetsky
On-Site Shopping
A Nintendo Switch Superfan Reviews The New OLED
You’re reading an On-Site Shopping story — meaning you can browse, add to cart, and actually purchase the product recommendations featured below with
by Karina Hoshikawa
Apple Products
The Best Cyber Monday Deals On Apple Airpods? We’re Listening
AirPods were a bonafide status symbol when they debuted in 2016‚ but these lil’ buds have become standard listening accessory just like any other house
by Alexandra Polk
Advertisement
Advertisement
Discover
R29 Stories & News
Watch
R29 Original Series & Films
Shop
R29's Most Wanted