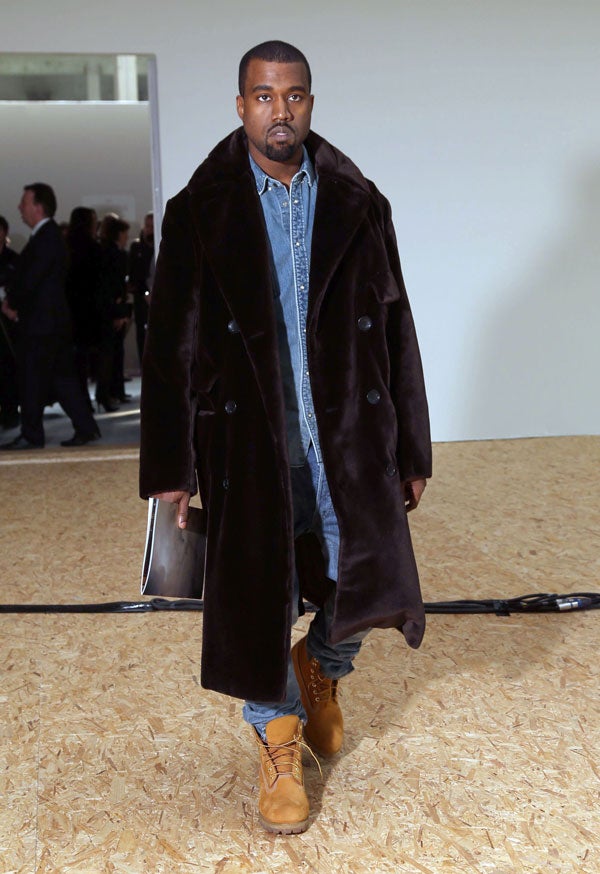 Despite what you think about Kanye West (who is a polarizing figure, based on how far West you may stand), he doesn't give interviews a lot. West's camp says there is no need, because every time he breaths or burps, he gets press — but a lot of people in media have suggested that his people don't let him sit down with writers regularly because his ideas are, well, out there.
The New York Times scored a rare treat of an interview with Yeezy that ran yesterday that proves both theories: Everyone is talking about it because it's Kanye, and also because it is really really intense. In it, he compares himself to an eighth grade basketball player, Michael Jordan, Steve Jobs, Rick Owens, a "forever 5 year old," Dead Prez, Gil Scott-Heron, and Miles Davis. He is painfully aware of his own cultural relevance, his race, and his message. Sometimes, the article reads like a bit of free-flowing poetry — and other times it is a rant. We suppose this kind of encapsulates the essence of Kanye.
Advertisement

A couple of amazing revelations:
— Kanye West acknowledges it looks like he is miserable 90% of the time.
— He relied on Jay-Z for a sense of validation, "Even with the kilt on..."
— Yeezus was inspired by minimalist architecture and design. In fact, he was able to reduce it to a simple item: "...This one Corbusier lamp was like, my greatest inspiration." It is possible, then, to say his album was inspired by a lamp.
— Despite his grandiose claims, he seems susceptible to moments of reflection: "My message isn’t perfectly defined. I have, as a human being, fallen to peer pressure."
— When it comes to fashion, Kanye doesn't want Christmas presents (?!): "But ultimately, this guy that was talking to me doesn’t make Christmas presents, meaning that nobody was asking for his [stuff] as a Christmas present. If you don’t make Christmas presents, meaning making something that’s so emotionally connected to people, don’t talk to me." We are still unpacking this.
— Kanye West is the Steve Jobs of rap: "I think what Kanye West is going to mean is something similar to what Steve Jobs means. I am undoubtedly, you know, Steve of Internet, downtown, fashion, culture. Period. By a long jump. I honestly feel that because Steve has passed, you know, it’s like when Biggie passed and Jay-Z was allowed to become Jay-Z."
— Somehow, he walks the line between making grandiose statements like the one above, and being totally, instinctually humble: "I was always considered this crazy hothead kid, but I would always just go and just really break bread with someone who I respected. I will completely bow to anybody I respect."
— He thinks the kilt was weird too: "Like what’s vanity about wearing a kilt?"
— Again and again, he makes it clear that there is nothing he wants more in this world than to be validated. He ends the article by confirming, "Respect my trendsetting abilities" and then stating again, "I am the nucleus."

The grandiose claims of Kanye are pretty intense — but it's true: Kanye has changed the rap game in a lot of ways, and has done so by making legitimately complicated and nuanced music with cultural appeal. Now, whether or not he's the Steve Jobs of rap...well, he does wear a lot of black, right? (NYT)