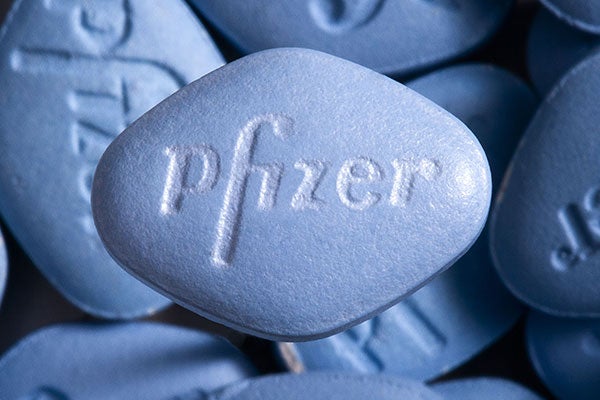 One need only mention Viagra to denote a host of controversy surrounding the treatment of women's health by our society and our government. While the drug has been an enormous financial success for Pfizer, it's also been a consistent point of discussion in the debate about female reproductive health, birth control, and women's versions of the drug itself. The latter has been markedly slow in coming to fruition since Viagra came on the scene, which seems to reflect a deep societal prejudice against female sexual liberation, even today. But now, according to this New York Times Magazine cover story, a lady's libido helper could finally be on its way.
Advertisement
The proposed drug, Lybrido, is currently going through tests. The inventer, Adriaan Tuitan, plans to present the results of his research to the FDA as early as this summer. The interesting thing about Lybrido, though, is that it appears to target the female psyche as much as the body. The article's author, Daniel Bergner, writes, "Give a man an erection, and his sensitized nerves and enhanced feelings of power are going to feed his drive. Women, research has shown, are less cognizant of genital arousal, and probably for this reason, Viagra-like substances haven’t done enough to raise women’s ratings of desire in past experiments." So, a female version of the drug has to address problems in libido-suppressing serotonin and libido-enhancing dopamine, ideally giving the latter a temporary advantage. And while Lybrido does contain testosterone, and is largely similar to Viagra, it differs in that it offers both increased genital blood flow and mental awareness of the same.
Right now, the women in trials are married, many with children, supporting the hypothesis that, as Bergner says, "for many women, the cause of their sexual malaise appears to be monogamy itself" — and research shows that desire tends to drop much more drastically in long-term relationships for women than for men. Tuiten himself doesn't mention monogamy beyond the fact that he needed women with one consistent partner to discount any desire that might be stimulated by the sheer excitement of a new lover.
If this is making you uneasy and evoking a lot of Victorian sensibilities about the delicate, demure nature of female sexuality, you're not alone. But, a study published by Queen's University last year suggests that female desire is actually not biologically programmed for fidelity by any means; in fact, women appear to get "bored" even faster than men. Sadly, research like that — plus claims by women in trials who said the pill dramatically improved their sex lives and returned them to the "jackrabbit" state of their relationship's early days — means that getting this pill on the market by 2016 (the current optimistic projection) is going to come with a lot of conservative controversy. Even now, market researchers and pharmaceutical companies are worried that this drug will be defeated by fear of the sexually crazed woman (heaven forbid).
So, yes, a female Viagra is coming. But, right now, it seems like it will be designed, or at least marketed, towards monogamists. Mother's Little Helper just took on a whole new meaning, but if this prescription comes with lifestyle conditions that Viagra does not, it's going to be a big step backwards and a bit of a disappointment. Politics aside, there's a lot of complex and interesting science going on here, including some tidbits about the female psyche that might surprise you. We highly recommend you head over to the original article and learn for yourself. It's exciting stuff, though, in more ways than one. (The New York Times)

Menstruation
Does Being Underwater Stop Your Period?
In high school, I would occasionally skip school when I had my period to spend the day hanging out in my bathtub. I mostly did it because I preferred bubbl
by Molly Longman
Wellness
The Best Underwear For Wicking Away Moisture (Down There)
by Karina Hoshikawa
Health Trends
Can Coconut Oil Cure A Yeast Infection?
Coconut trees are sometimes called “trees of life” because they, and their fruit, have so many uses. The oil alone has been used in cookin
by Elizabeth Gulino
Menstruation
Amy Schumer Wants To Help You Learn How To Use A Tampon
“It took me years before I understood that you’re supposed to press it in all the way in until you don’t feel it,” Amy Schumer tells me over the ph
by Mirel Zaman
Coronavirus
The Most Breathable Face Masks To Live Your Best Active Summer Life
by Karina Hoshikawa
Health Trends
I Used CBD Tampons To Try To Cure My Period Cramps
Cramping. Bloating. Fatigue. These are just some of the many side effects we endure when our period pays us a visit each and every month. Usually, one migh
by Elizabeth Gulino
Wellness
7 Cute Bike Baskets For Holding Your Stuff (From Phones To Pups)
by Karina Hoshikawa
Most Wanted
These Are The Best Places To Buy Sex Toys Online
by Karina Hoshikawa
Sex
13 Sex Pillows That Will Take Your Pleasure To The Next Level
by Kathryn Lindsay
Horoscopes
Your Horoscope This Week
by Venus Australis
Coronavirus
It’s Hot. Here’s How To Make Your Face Mask More Comf...
I’m going to kick this off with two statements that are likely beyond obvious to you (unless you’ve spent the first half of 2020 living off the
by Molly Longman
Sex
11 Ways To Make Sex In A Tent So Much More Comfortable
by Kasandra Brabaw
Discover
R29 Stories & News
Watch
R29 Original Series & Films
Shop
R29's Most Wanted