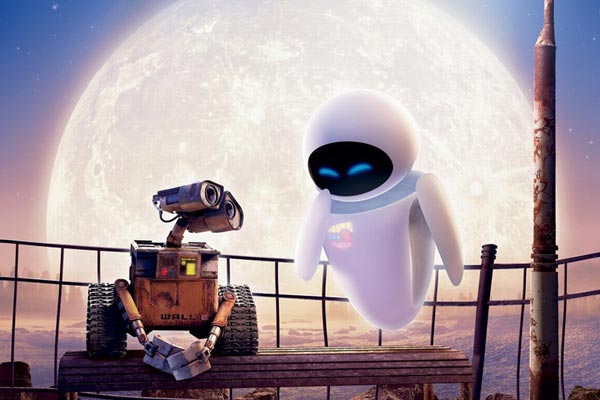 If you caught yourself tearing up while watching WALL-E roam a trash-infested, post-human Earth, you're not alone — and you're not crazy, either. Researchers at the University of Duisburg-Essen in Germany have found that people empathize with robots the same way they empathize with their peers.
The scientists measured 40 subjects' reactions to watching a short video in which a faceless human behaves kindly towards a dinosaur robot, and another where the same bot is strangled and beaten. Participants were also shown videos of both a woman and, as a control-variable, a cardboard box undergoing the same treatment. Areas of the brain related to empathy were slightly more active during the scenes of human torture than they were during the dinosaur abuse, and even moreso than the cardboard-torture scenes. So, that's good. Even though we can't seem to live without them, we haven't hopelessly fallen in love with our gadgets yet, .
This study shows further proof that humans will anthropomorphize just about anything, even if it's just a poor little piece of stiff paper — hey, he's just trying to live his life and do his cardboard-mom proud! The study's authors also noted that this may be the beginning of a dangerous chain of events leading to a robot-apocalypse and the realization of events foretold by the prophet Arnold Schwarzenegger. Okay, we made that last part up. (The Atlantic)

Tech
In Defense Of Doomscrolling: How Twitter Is Helping Me Process 2020
The first thing I did when I read my phone’s news alert that Ruth Bader Ginsburg had died was drop the spoon I was eating with; I gasped out loud and
by Olivia Harrison
Gift Guides
Sul Sul! Here Are The Best Gifts For Fans Of The Sims
by Whizy Kim
Alexandria Ocasio-Cortez
Among Us Is The Very Memeable Game AOC Was Playing Last Night
Nearly five million people tuned into Rep. Alexandria Ocasio Cortez‘s first-ever Twitch stream in what became one of the platform’s most-watche
by Michelle Santiago...
TikTok
Maid Outfits Are Taking Over TikTok & It’s All Thanks To Boys
It’s good to have at least one night a year we give to that part of ourselves we usually relegate to the shadows. Maybe it’s your actual dark s
by Michelle Santiago...
Unbothered
Sinead Bovell Is Shaking Up The Tech Space
Sinead Bovell didn’t plan on becoming a model. “We weren’t allowed to read magazines until we were 18 in my house,” she recalls. But wh
by R29 Unbothered
Tech
Do You Remember How The Song Goes? Google Will Finally Help You T...
You know when you have a song stuck in your head and the depth of your being says: “we can’t go on unless we figure out what this song is.̶
by Michelle Santiago...
Prime Day
ALL The Apple Deals You Can Score This Prime Day (Starting Now)
by Alexandra Polk
TikTok
This New TikTok Trend Is Encouraging You To “Kill Brands, G...
You know the meme: “There is no ethical consumption under capitalism.” It’s almost tiring at this point. We are all perfectly aware that
by Michelle Santiago...
Amazon
ALL The Video-Game Deals Worth Bagging Before Prime Day Ends
by Karina Hoshikawa
Gift Guides
15 Of The Coolest Tech Gifts For Every Gadget-Lover On Your List
by Cortne Bonilla
iPhone
Twitter Has A Lot Of Feeling About The New iPhones
Today is the day many tech geeks (we’re using that moniker affectionately!) look forward to every year: the Apple Event. This year, chief among the e
by Olivia Harrison
Prime Day
Prime Day 2020’s Crazy-Good Tech Deals, Found
by Ray Lowe
Discover
R29 Stories & News
Watch
R29 Original Series & Films
Shop
R29's Most Wanted