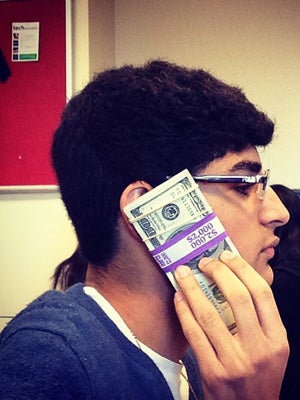 Update: So, as you may have suspected, this dude is a total fraud. That’s right, Lavish is a liar, guys — but, are you surprised? After ten minutes of sleuthing around the web, we noticed a few red flags that ultimately brought us to this eyebrow-raising conclusion. First off, the serial numbers on the bills are all the same, indicating he's been recycling the same bills. Also, you can’t even put $10,000 on a Starbucks card, the max is $500 — so chew on that. And, the peeps that allegedly “won” his giveaways are private Instagram accounts, leading us to believe they were created by none other than — gasp — Lavish himself. Shame!
Advertisement
Folks, with the rich kids and cats of Instagram posting their abundantly spoiled lifestyles on the photo-sharing site, we thought we'd seen the worst of it. Oh, were we ever so wrong. We've stumbled upon the gold mine of social-media extravagance that would induce even those aristocats to cough up a fur ball in disgust. Enter IG avatar Lavish, who goes by the username @ItsLavishBitch, and his bevy of are-you-kidding-me posts. (Um, his tagline: "My life is like Louis Vuitton, everyone wants it. -- You made ur bed so sleep in it peasants.")
The S.F.-based 17-year-old posts himself with stacks of Benjamins — sometimes, in his mouth! — holding up half a dozen iPhone 5s like a deck of cards, and apparently only washes away a hard days' "work" with bottled Pellegrino. Nauseated, yet? There's more. It's a bird, it's a plane — nope, it's Lavish sending off thousands of dollars tied to helium balloons into the sky! We. Are. Dead. Serious.
It may not be clear where exactly Lavish collects his coins (or if it's all even legit), but he's on a mission to make sure we know exactly how much he's supposedly worth, and where he goes on shopping sprees. Lavish, a word of advice: With the amazing selection of original coffee joints in the city, we can't help but scratch our heads at your almost $10,000 Starbucks balance. We mean, the least you can do is throw some of that money into local spots.
The upside? Lavish has opened his pocket book to his over 85,000 followers by doing giveaways ranging from $20-$60K (if the transaction ever occurs is to-be-confirmed). So, tell us: Is that worth following this obnoxious user or would you rather not bear witness to this gross display of indulgence? (Buzzfeed)

Chrissy Teigen
Chrissy Teigen Apologizes To Courtney Stodden For Being An “...
As conversation around the media’s mistreatment of young women like Britney Spears continues, more examples of pop culture’s predatory and miso
by Ineye Komonibo
TV Shows
Amazon’s Panic Looks Like Outer Banks Mee...
How far would you go to live the life you desired? In Amazon Prime Video’s new YA series Panic, high school seniors risk their lives for the chance t
by Natalie Morin
Music
Fifth Harmony’s Ally Brooke Claims She Was Mentally & Verbally Ab...
Ally Brooke, former member of Fifth Harmony, revealed that her time with the girl group was “traumatizing” and rife with toxicity. She also cla
by Natalie Morin
Advertisement
TV Shows
Every Song From Handmaid’s Tale Season 4 — So Far
June escapes Gilead, with a badass soundtrack to keep her company.
by Joyce Chen
TV Shows
The Summer TV Preview: These Are The 18 TV Treats You’ll Want To ...
by Ariana Romero
TV Shows
Sandra Oh Won’t Return To Grey’s Anatomy Becau...
Grey’s Anatomy is the longest running medical series in television history, but it’s lost some of its beloved castmates along the way, Sandra O
by Ineye Komonibo
Ellen Degeneres
Ellen DeGeneres Will End Her Talk Show In 2022: “It’s Just Not A ...
Ellen DeGeneres announced on May 12 that she is ending her daytime talk show, The Ellen DeGeneres Show, in 2022. The upcoming 19th season of Ellen will be
by Natalie Morin
Entertainment
This Porsha Williams News Hints That Her RHOA Drama Is Far...
The thirteenth season of The Real Housewives of Atlanta may be over, but fans are already ravenous for a new installment of the Bravo staple thanks to some
by Ineye Komonibo
Unbothered
Black Criticism Is Always Good — Especially When Black Art Isn’t
Welcome to “What’s Good,” where we break down what’s soothing, distracting, or just plain good in the streaming world with a “rooting for everybo
by Kathleen Newman-B...
Best of Netflix
Everyone Is At Home Watching These 10 Shows & Movies On Netflix R...
by Ineye Komonibo
Unbothered
Morgan Harper Nichols Was Just Diagnosed With Autism — Now She’s ...
Morgan Harper Nichols has been autistic since childhood, but it wasn’t until her recent diagnosis that things became clear for her. “Since I was young,
by Stephanie Long
TV Shows
Let’s Unpack Cruel Summer‘s Upsetting Carnival...
Spoilers are ahead. Though Cruel Summer set up a brutal conflict between two teenage girls, Jeanette Turner (Chiara Aurelia) and Kate Wallis (Olivia Holt),
by Rosie Knight
Advertisement
Advertisement
Discover
R29 Stories & News
Watch
R29 Original Series & Films
Shop
R29's Most Wanted