Skip navigation!
Story from Sex
Relationships are hard...even when you live in the same time zone. When you're a continent apart, things become infinitely more complicated. Which is why we so enjoy a good story of love conquering all, especially in a long-distance relationship. Such is the case with Oxford-based Lucy and Michigan-based Kaelyn — they're not only making it work but are also documenting the entire process on social media.
The couple met through a Taylor Swift Tumblr site Kaelyn was running at the time. Their YouTube videos as well as their Facebook, Instagram, and Tumblr accounts document the times when they actually get to be together, in person. In less adept hands, this could be a self-indulgent exercise of the highest order, but instead — as demonstrated by the YouTube and Facebook stats — it’s a humorous and often thought-provoking experience. The couple has such a huge fan base that they even have a merch section on their site, as well as a donate button where contributions can be made toward their next plane ticket (apparently, it was a request from their fans, but yes, these women are essentially crowdsourcing the funding it takes for a long-distance relationship).
Advertisement
These two individuals have harnessed the power of social media not only to communicate the trials and tribulations of long-distance love but also to strengthen their relationship. We wish them all the best and look forward to the next installment in their love affair. But you tell us: Is this oversharing, or are you as intrigued by them as we are? (The Hairpin) 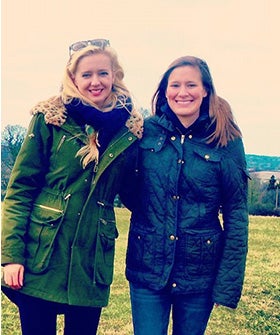 Photo: Via Kaelyn and Lucy’s tumblr

Sex Toys
LELO Is Celebrating Masturbation May In The Best Way (Hint: It...
by Karina Hoshikawa
Relationships
I Changed My Name When I Got Married, & I’ve Felt Weird About It ...
Two years ago, I got married and took my husband’s last name, adopting my original surname as my middle name and dropping my birth-given middle name alto
by Mirel Zaman
Living
Be Real — Has WFH Turned You Into A Lunchtime Masturbator?
Of all the changes we’ve experienced this year, the blending of home and workspace is probably the most physically, emotionally, and philosophically over
by Michelle Santiago...
Advertisement
Most Wanted
Maude Launched A Sultry New Sexual-Wellness Scent
In the spring-fever spirit, Brooklyn-based sexual-wellness darling Maude is releasing two of its bestselling goodies in a sultry new scent no. 2. Burn (the
by Karina Hoshikawa
Most Wanted
Dame’s Bestselling Suction Vibrator Is BACK (& $15 Off!)
You never want something until you can’t have it. So, each week in The Sell-Out, we’re getting the scoop from your favorite retailers on what’s
by Karina Hoshikawa
Books & Art
Gina Frangello Knows That Perfection Is The Opposite Of Intimacy
“Certain issues of being a woman follow you no matter where you go,” Gina Frangello told me over the phone not long ago. “No matter how y
by Kristin Iversen
Most Wanted
This Up-To-50%-Off Lovehoney Sale Is Hot, Hot, HOT
Upgrading your sex toy game just got more affordable. Lovehoney’s Big Brand Event is officially turned ON with vibrators, lubes, lingerie, and m
by Karina Hoshikawa
Books & Art
A.E. Osworth Wrote A Love Letter For Their People
I fell in love with A.E. Osworth’s writing the first time I read it. I came across an essay of theirs and read it over and over and over again, and then
by Britni de la Cretaz
Most Wanted
These Are The Best Places To Buy Sex Toys Online
by Karina Hoshikawa
Sex
12 Tips For Your First Time Having Sex
So, you’ve decided to have sex for the first time. Whether you’re in high school, college, in your twenties, or fifties, making your sexual debut can f
by Erika W. Smith
Most Wanted
Egg Vibrators Are Spring’s Hottest Sex Toy
by Karina Hoshikawa
Sex
Move Over Lube, There’s A New Sex Serum In Town
by Karina Hoshikawa
Advertisement
Advertisement
Discover
R29 Stories & News
Watch
R29 Original Series & Films
Shop
R29's Most Wanted