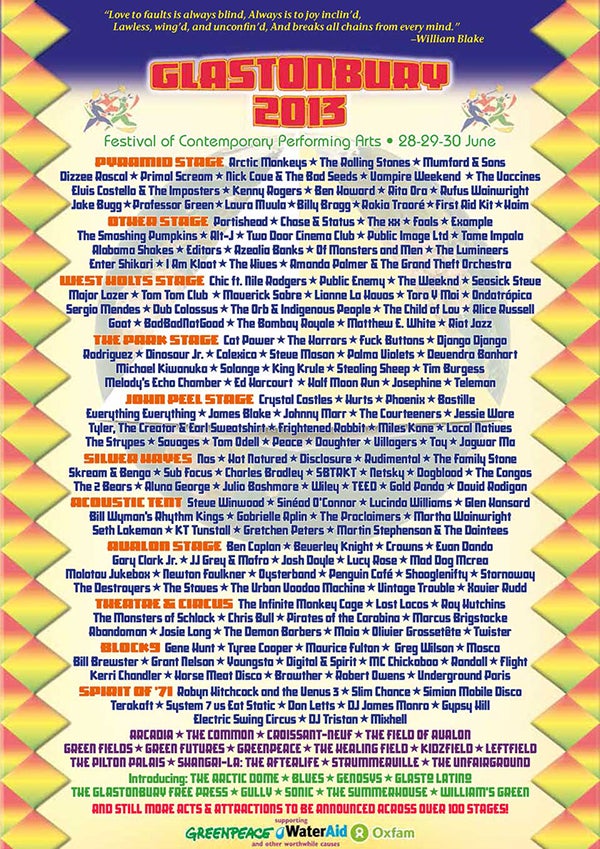 While The Rolling Stones may have been the big (false) rumor for Coachella this year, Keith Richards and company were snagged by the famed British festival across the pond. Amazingly, it will be the first time the band has headlined England's biggest music fest, and we couldn't think of a better act to top the bill. Jagger even went on Twitter to joke about the event's famously marshy environment, telling fans, "Can't wait to play Glastonbury. I have my wellies and my yurt." This goes to show us that the only guy who has moves like Jagger is Jagger himself.
Advertisement
Alongside The Rolling Stones, the lineup is a typically eclectic band blowout with folksy beardos Mumford & Sons, indie rockers Arctic Monkeys and Vampire Weekend, trip-hoppers Portishead, old punkers Elvis Costello and Nick Cave & The Bad Seeds, and a fair amount of solid hip-hop acts (we're looking at you Earl Sweatshirt). They even snagged R&B crooner The Weeknd.
If the festival organizer's goal was to please everyone, they did a pretty good job. If you're one of the people who helped sell out the festival last October, it seems like you made the right decision. Check out the full lineup from the Glastonbury flyer above, and mark your calendars for June 28 through 30.

Advertisement
TV Shows
Why Everyone Is (Thirst) Tweeting About Danny Phantom
Now that much of the world is social distancing due to the spread of the coronavirus, there’s time to reflect on our past passions. For many people on Tw
by Kaitlin Reilly
TV Shows
Selena Quintanilla’s Widower Says He Was Not Consulted Abou...
A new series about the life of the Queen of Tejano, Selena Quintanilla, is heading to Netflix…but not without some controversy. In Selena: The Series
by Kaitlin Reilly
Pop Culture
Chrissy Teigen & John Legend Are Almost Out Of Jokes To Survive Q...
As the World Health Organization predicts that the United States is approaching what could very well be one of the most devastating weeks of the coronaviru
by Ineye Komonibo
Pop Culture
Is The Lindsay-Nicole-Paris Circus Getting A 2020 Reboot?
Being in quarantine means reminiscing on simpler times. Thanks to a new single, magazine shoot, and Quibi show, that time is 2006. As Lindsay Lohan returns
by Kathryn Lindsay
Entertainment
Ellen Pompeo’s 5-Year-Old Daughter Is Ready For Her Leading...
Due to the coronavirus pandemic, Grey’s Anatomy will end season 16 earlier than expected, with its finale scheduled to air on Thursday, April 9. While fa
by Kaitlin Reilly
Pop Culture
No Zoom Weddings For Them: Every Celebrity Who Has Cancelled Or M...
by Kaitlin Reilly
TV Shows
How Can The Money Heist Crew Survive That Finale Disaster?
Warning: Spoilers ahead for Money Heist part 4 finale, “The Paris Plan.” The closing minutes of Money Heist part 4 are a little too cherry for a Netfli
by Ariana Romero
Pop Culture
P!nk Opens Up About Her & Her 3-Year-Old Son’s “Reall...
Public health experts have predicted that the next few weeks will be the toughest yet in the battle against the coronavirus pandemic. For the thousands tha
by Ineye Komonibo
Coronavirus
How Women In Hollywood Are Dealing With Their Sets Being Shut Down
by Anne Cohen
TV Shows
The First Quarantine Dating Reality Show Is Here
It was only a matter of time before quarantine content went from YouTube to TV, and it should surprise no one that 90 Day Fiancé is the first show to get
by Kathryn Lindsay
Book Recommendations
Katie Heaney’s YA Debut Is The Queer Teen Romance Novel We Needed
Katie Heaney, a senior writer at The Cut and author of several books including Would You Rather? about coming out in her late 20s, is pivoting to YA, with
by Gabrielle Korn
TV Shows
These Are Hands Down The Best Real Housewives Taglines Of ...
by Lia Beck
Discover
R29 Stories & News
Watch
R29 Original Series & Films
Shop
R29's Most Wanted