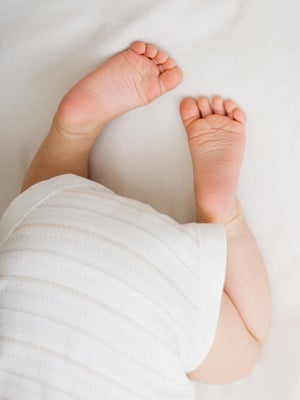 Sometimes, on a particularly cynical day, a cure for HIV seems impossibly far — which is why, most of the time, healthcare officials focus on prevention. That's a good thing, and it should never change. But, the picture may have just gotten a little bit brighter. Doctors announced on Sunday that a baby, born with HIV, was cured of the infection after agressive antiretroviral treatment.
Today, there are an estimated three million children living with HIV. Studies have shown about 15-30% of infants receive the infection from their mothers during pregnancy and delivery, and an additional 5-20% during breastfeeding. There are effective treatments for preventing this transference, but until now, there has been no success in retroactively treating it. In this case, the baby was treated beginning about 30 hours after birth and showed no signs of infection by two years of age, though The New York Times reports that confirmation of a cure is still pending (in part because some experts say there was never definitive evidence that the child was infected in the first place).
Advertisement
A single patient has been cured of H.I.V. before, by receiving a bone marrow transplant from a person resistant to the virus. But that procedure is so costly, and so dangerous, that it's currently not feasible as treatment for the vast majority of people — particularly in low-income areas and countries with limited infrastructure.
Whether the results of this baby's recovery will have any impact on treatment for adults remains to be seen. According to The New York Times, there have actually been reports of infants overcoming the virus even without treatment, though none are widely accepted by the scientific community. In this case, scientists' early speculation suggests that the drugs were given the chance to act before the virus established what's called a "latent reservoir," after which it's significantly more difficult to treat. Normally, that aggressive approach would be witheld until about six weeks after birth, by which time it may be too late. You can read more about the science behind this astonishing development here, but as with any isolated medical development, the real implications aren't yet clear. Still, though, even one healthy baby is enough to make us feel a lot better about the future of millions.