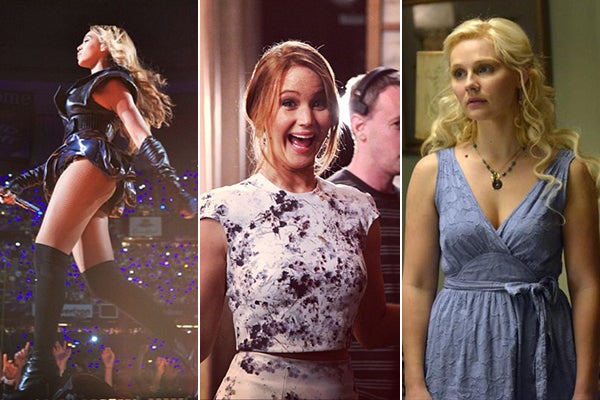 Hump: Beyoncé won the Super Bowl as far as I’m concerned. I mean, she basically danced the equivalent of a marathon while looking smoking hot and filming the opening credits for the next Bond movie. To be fair, I did have to Google which teams were playing, so I may not be the best judge of who wins sports events. Nevertheless, I’d like to see Joe Flacco try to do the "Single Ladies” dance in five-inch heels and a leather corset. Wait, no I wouldn’t.
Marry: Just when I think my massive girl crush on Jennifer Lawrence has reached a saturation point, she goes and says something that makes me even more convinced she’s my spirit animal and one of the all-around coolest people. Ever. When she appeared on Conan this past Tuesday, Lawrence revealed that she doesn’t like to leave her house so she doesn’t have to change her pants or put a bra on. This is basically my life philosophy, except that she doesn’t leave because of rabid paparazzi lurking outside, whereas I don’t leave because of the pants/bra reason (and general laziness). Either way, it’s nice to know someone out there shares my opinion about the huge bother of wearing public-appropriate clothing and supportive undergarments.
Kill: Ever wonder what the human equivalent of one of those dogs in ASPCA commercials would look like? Well, her name is Scarlett (Clare Bowen), and you can find her on Nashville. For some reason, she holds her mouth like she lost her back teeth due to sugar rot, and those big, huge eyes always seem to broadcast “Who, me? But I’m such a naive, virginal, gentle flower,” while all sorts of pernicious fates befall those around her. Inviting her writing partner who’s admitted he’s in love with her to move in? Sure, great idea. Letting him get into a fist fight with her ex-boyfriend instead of simply saying “There’s no need to fight, we’re not sleeping together” — yep, she let that happen. I’ve never wanted to climb inside the television and scream “Do something...anything...have some damn agency!” more than when Scarlett appears on screen during Nashville.

Somos Libres
Black Women Carry Reggaetón’s Foundation; Let’s Ensure They Reign...
“Our music, regardless that we have more feminine presence, is still ruled by the guys,” Ivy Queen, beloved Puerto Rican reggaetón pioneer and host of
by Ecleen Luzmila Ca...
Entertainment
María Isabel Finds Her Strength in Soft Bilingual R&B
María Isabel has mastered the art of songwriting. You can hear it in her sophomore EP, i hope you’re very unhappy without me. Through the eight-track pr
by Brenda Barrientos
Unbothered
Actually, Netflix, Content Like Dave Chappelle’s Transphobic Come...
If you are extremely online, you know the internet has been dominated by take after take — some thoughtful, some ignorant — on Dave Chappelle’s recen
by Kathleen Newman-B...
Advertisement
Unbothered
Well-Read Black Girl & R29Unbothered Present The Black Love Readi...
by R29 Unbothered
Unbothered
Netflix Wants You To Join Its Book Club & Is Throwing In Uzo Adub...
From Bridgerton to A Series of Unfortunate Events to Shadow and Bone, many of Netflix’s exciting original offerings are adaptations of equally popular li
by Ineye Komonibo
Unbothered
Why Are We Fighting Over The Next Bond? Lashana Lynch Is Right There
This story includes spoilers from No Time to Die. After being delayed for more than a year due to the ongoing coronavirus pandemic, No Time to Die has fina
by Ineye Komonibo
Unbothered
Phoebe Robinson’s Tiny Reparations In The Publishing Industry
It’s almost absurd to think that Phoebe Robinson — a successful comedian, author and actress of 2 Dope Queens fame would have difficulty selling her fi
by Stephanie Long
Dedicated Feature
Insecure‘s Yvonne Orji On Why Her Onscreen Charact...
Insecure, the award-winning, critically acclaimed, insanely relatable HBO series, is all about what it means to be a Black woman in America. But at its cor
by Taiia Smart Young
Unbothered
Years After Her Death, The Science Community Is Still Treating He...
In the 1950s, a Black woman named Henrietta Lacks walked into Johns Hopkins Hospital to be treated for cervical cancer, and her cells would go on to be us
by Ineye Komonibo
Unbothered
We’re Raising A Fist For The Radical Hood Library, Noname’s Lates...
Last week, Noname opened the Radical Hood Library, a Black-led, Los Angeles-based literary liberation project that was created to service Black and brown p
by Stephanie Long
Unbothered
What Lil Nas X’s ‘Montero’ Means To The Young, Black & Queer: A C...
In May 2019, I went home to Columbus, Ohio to visit my mother. It was her 60th birthday, but I didn’t just come home to celebrate her. I was also there t
by Amber J. Phillips
Unbothered
Black Love In The Bachelor Franchise? Groundbreaking (No, ...
What might have been the most chaotic season of Bachelor in Paradise has finally come to an end, and although the process was more tumultuous than it neede
by Ineye Komonibo
Advertisement
Advertisement
Discover
R29 Stories & News
Watch
R29 Original Series & Films
Shop
R29's Most Wanted