Skip navigation!
Story from Entertainment News
The gays! They're out to get us with their flamboyant ways and their Illuminati and their equal rights. Somebody has to stop them! Especially when the likes of actor Neil Patrick Harris has the audacity to get involved with Ye Olde Holiest Grail of American Manhood: the Super Bowl. Fortunately, conservatives are on it and calling out CBS for promoting "a gay agenda."
The offense? CBS' How I Met Your Mother star (who plays a straight womanizer — surely another gay-agenda ploy) was featured in a Super Bowl ad wearing eye-black grease that spelled out, "I'm Gay! Man Love 4 Life." Oh, wait, sorry, that's totally NOT what it said. In fact, his eye black simply read, "Feb 3 2013," the date of the big game. Writers over at conservative news site WND cited one viewer's opinion that NPH was mocking Christianity and Jets quarterback Tim Tebow, who frequently hits the field with Biblical verse numbers etched on his face. Nothing in the ad copy made gay references, but since Neil is an "outspoken homosexual," of course this counts as a gay agenda. Nevermind that Tebow is hardly the only player in the history of the NFL to wear eye black, or that this teaser image is the number one image result for a "Beyoncé" Google search and appears multiple times in the results for "Super Bowl 2013," as well.
Advertisement
Finally, in a highly comprehensive WND poll, a majority of the 507 participants voted, "Yes, and every effort should be made to boycott CBS and its advertisers." We, on the other hand, think CBS deserves a pat on the back for creating a perfectly fine ad featuring an actor millions of Americans love. Period. (The Huffington Post) 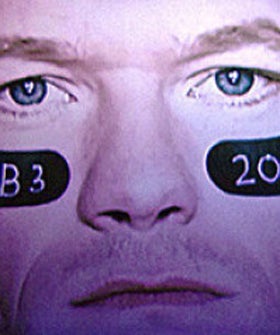 Pop Culture
Despite Their Rift, Meghan & Harry’s Daughter’s Name Has Major Ro...
Meghan and Harry, the Duchess and Duke of Sussex, confirmed via a spokesperson that they welcomed their second child on Friday, June 4. The baby, a girl, w
by Lauren Le Vine
Culture
Naomi Osaka And The Necessity Of Refusal
On Monday, tennis champion Naomi Osaka announced that she was withdrawing from the French Open tournament in order to protect her mental health. Days
by Breya Johnson
Entertainment News
The LAPD Is Investigating An Alarming Series Of Assault Allegatio...
This story contains details of sexual violence. Months after a series of disturbing allegations of sexual assault naming musicians and married couple T.I.
by Ineye Komonibo
Advertisement
Music
Billie Eilish “Never Wants to Post Again” After Photo...
Billie Eilish debuted a new look on the June cover of British Vogue that imploded the internet — and made her never want to post on social media again. T
by Natalie Morin
Unbothered
We Created Hollywood’s New Inclusion Rider — Here’s Why It’s Just...
Fanshen Cox and Kalpana Kotagal co-authored the Inclusion Rider. Cox is the head of strategic outreach at Pearl Street Films and co-host of the Webby nomin
by Fanshen Cox
Unbothered
DMX’s Death Has Exposed The Insensitivity That Still Surrounds Su...
Dis providing an opportunity to shift how audiences and the media engage with substance use, mental health, and the complications that arise with celebrity
by Sharine Taylor
Entertainment News
Johnny Depp Loses Appeal In Amber Heard Libel Case Amid Other Law...
Johnny Depp is dealing with another loss in his drawn out battle against the courts and ex-wife Amber Heard, losing his appeal against the UK High Court ju
by Ineye Komonibo
Entertainment
T.I. & Tiny Harris Deny Numerous Disturbing Claims Of Abuse & Rape
This story contains details of sexual violence. Musicians and married couple T.I. (real name Clifford Harris) and Tameka “Tiny” Harris are pote
by Ineye Komonibo
Entertainment News
FKA Twigs Shares Dark Details Of Her Abusive Relationship With Sh...
This story contains details of intimate partner violence. Months after revealing that her former relationship with Shia LaBeouf was allegedly wrought with
by Ineye Komonibo
Entertainment News
Dustin Diamond of Saved By The Bell Fame Is Dead At 44
Dustin Diamond, the actor best known as playing the quirky Screech on beloved ’90s NBC sitcom Saved By The Bell, died on February 1. He was 44. Accor
by Natalie Morin
Entertainment News
Hollywood Icon Cicely Tyson Dead At 96
Cicely Tyson, boundary-breaking and award-winning actress, died on Thursday, January 28, 2021. The beloved film star was 96 years old, and her cause of dea
by Ineye Komonibo
Entertainment
Mossimo Giannulli To Finish His Prison Sentence Behind Bars
Updated January 27, 2021: Despite the lengthy pleas of his legal team, Mossimo Giannulli will be spending the rest of his prison sentence inside of an actu
by Ineye Komonibo
Advertisement
Advertisement
Discover
R29 Stories & News
Watch
R29 Original Series & Films
Shop
R29's Most Wanted