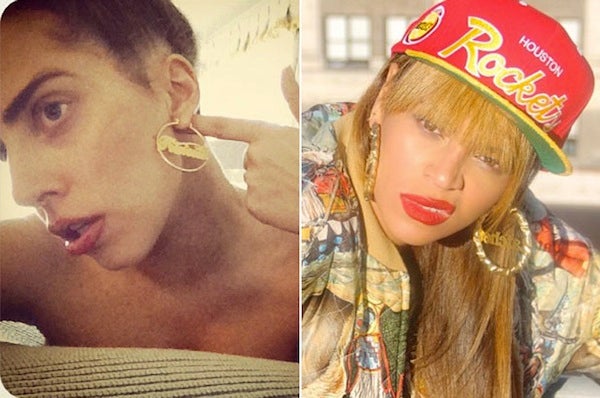 Ah, the good old days, when Beyoncé and Lady Gaga were the world's greatest duo, in the unstoppable video sensation that was "Telephone." Well, don't get all nostalgic quite yet. Though the single may have since faded from the charts in the past few years, it ain't over 'til it's over! The dream team is apparently getting back together for a sequel to the 2010 track, as Beyoncé hinted in this Instagram photo.
As you can see in Exhibit A above, Gaga and Baddie Bey happen to own the same telltale pair of earrings with the word "ratchet" in traditional bling script — a clear sign that something's in the works. Gaga already confirmed she's working on a new single of the same name, written by the illustrious Azealia Banks, but does this mean B's on board, too? Whether or not a reunion is on the way, we will always treasure this coulda-been, uber-90s sass queen version of Beyoncé. Based on the attitude she's giving in this span, it's a role that clearly comes naturally. (Billboard)

Entertainment
She Created Her Own Korean Disney Princess Musical & This Needs T...
When most people think of an Asian Disney princess, there’s often one go-to: Mulan aka the Chinese heroine who doesn’t need saving but instead save
by Katherine Singh
Entertainment
How Female Scammers Became Accidental Girlboss Icons
Con artists are nothing new. But our collective interest in them has been piqued in recent years as a number of high-profile scandals have redefined the wa
by Alice Porter
Dedicated Feature
Single Drunk Female — A Must-See Comedy About Sobriety —...
Margarita Mondays. Wine Wednesdays. Happy hours. “Book club.” In a world in which drinking culture is the norm, with holidays (St. Patrick’s Day, New
by Andrea Cheng
Advertisement
Unbothered
In Defense Of Ari Lennox’s Trip to Ghana: The Power and Pro...
Grammy-nominated musician Ari Lennox recently performed at Ghana’s Afrochella music festival and shared her experience in the West African nation on Twit
by Qali Id
Somos Latinx
How Afrobeats Is Musically Bridging Black Latinxs and Africans
The first time I heard Colombian pop singer Maluma’s “Mama Tetema,” featuring Tanzanian singer-songwriter Rayvanny, I was writing a script for VEVO?
by Marjua Estevez
Unbothered
Netflix Has A Hit On Its Hands With The New Cast Of Too Hot To...
Spoilers for Netflix’s Too Hot to Handle ahead. Too Hot to Handle came to us at the beginning of the coronavirus pandemic. It was gloriously-timed conten
by Ineye Komonibo
Unbothered
And Just Like That… Sex and the City Still Doesn’t D...
Sex and the City is such a pop-culture juggernaut that many Black women can make some reference to it, whether it be a love of the Cosmopolitan, a salute t
by Niki McGloster
Unbothered
Still Missing Insecure? These New Black Shows Will Make It...
by Ineye Komonibo
Unbothered
It’s Time For Black TikTok Creators To Be Paid Their Worth
Forbes recently named TikTok’s top-earning creators, including Charlie and Dixie D’Amelio and Addison Rae.
by Venesa Coger
Dedicated Feature
How Sita Abellan Is Rethinking The Word “Influencer” For Hispanic...
Sita Abellan epitomizes “Jack of all trades.” Throughout the course of the last decade, she’s worked as a model, a designer, an Instagram Personality
by R29 Editors
Unbothered
Station Eleven Can Be A Devastating Watch, But Danielle ...
Welcome to “What’s Good,” a column where we break down what’s soothing, distracting, or just plain good in the streaming world with a “rooting fo
by Kathleen Newman-B...
Book-ish
Books By Black Authors We Can’t Wait To Read In 2022
by Stephanie Long
Advertisement
Advertisement
Discover
R29 Stories & News
Watch
R29 Original Series & Films
Shop
R29's Most Wanted