Skip navigation!
Story from Politics
Got up on the wrong side of the bed this morning? This should more than take care of it. We've basically been speechless from a disease caused by the adorable-itis superfluous bacterium since we read this story about the World's Greatest Dad (for real this time), a resident of Germany and generally the nicest guy we've ever heard of. Nils Pickert's young son likes to wears dresses, and instead of freaking out and forcing the poor kid to repress the urge, this guy decided to wear a skirt as a sign of solidarity.
It's understandable that even the most progressive of parents would be concerned about young boys cross-dressing (although for some reason the same issues don't seem to apply to female "tomboys"). After all, even if they genuinely don't mind their sons wearing dresses, painting their nails, or playing with dolls, no parent wants to see a child bullied and tormented at school. That certainly occurred to Pickert, but he quickly came around and decided that rather than make his son conform to the rules of their "very traditional" town, he would stand up for his child's rights.
Advertisement
And apparently it worked: Now, when kids tease him at school, Pickert's son just says, "You only don't dare to wear skirts and dresses because your dads don't dare to either." Go ahead, wipe away that tear. We won't say we told you so or anything. (Gawker) 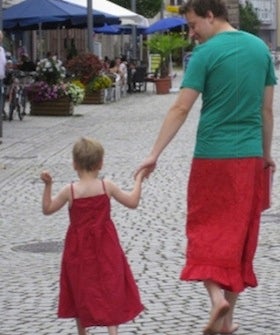 2020 Election
Everyone Should Be Double-Checking The Names On Their Absentee Ba...
With five weeks left until the presidential election, the initiative to vote by mail is well underway. But that hit a roadblock this week, when numerous Ne
by Sarah Midkiff
News
Tulsi Gabbard Is Backing A Ballot Harvesting Ban Tied To A Right-...
Despite finally fading into the shadows after a contentious presidential primary race, it seems former Democratic presidential candidate Tulsi Gabbard has
by Elly Belle
News
What To Know About Amy Coney Barrett’s Record On Abortion R...
Judge Amy Coney Barrett, President Donald Trump’s pick to succeed Justice Ruth Bader Ginsburg on the Supreme Court, has only been a judge for three years
by Natalie Gontcharova
Somos Latinx
No, I’m Not A Proud Latina
Dash Harris Machado is the co-founder of AfroLatino Travel, an organization that facilitates trips focused on centering Latin America’s African roots, an
by Dash Harris
News
Trump Doesn’t Think You Care About His Taxes. That’s ...
The New York Times released a bombshell report on Sunday that revealed President Donald Trump to be — shocker! — a chronic tax evader riddled with de
by Asia Ewart
News
No, There’s No Such Thing As “Conservative Feminism&#...
In his most recent New York Times editorial, Ross Douthat suggested that Judge Amy Coney Barrett’s nomination to succeed Justice Ruth Bader Ginsburg on t
by Natalie Gontcharova
Climate Uprise
The 2020 Election May Hinge On The “Climate Change Voter...
It’s time to wake up. On Global Day of Climate Action, VICE Media Group is solely telling stories about our current climate crisis. Click here to meet yo
by Natalie Gontcharova
News
Bernie Sanders Issued A Major Warning About Trump’s Refusal...
Vermont Sen. Bernie Sanders warned Americans on Thursday of the unique threat President Donald Trump poses to democracy, specifically in the event that the
by Erin Corbett
Unbothered
The Breonna Taylor Grand Jury Decision Proves How Little America ...
On September 23, former officer Brett Hankinson, one of three officers responsible for Breonna Taylor’s murder, was charged with three counts of wanton e
by Stephanie Long
News
Donald Trump’s Niece Is Suing Him For Fraud & Conspiracy. OK!!
Donald Trump’s niece, Mary Trump, is taking the family feud up a notch: On Thursday, she filed a lawsuit against the president and two of his siblings fo
by Britni de la Cretaz
News
“Vote Him Out”: A Crowd Heckled Trump While He Visite...
President Donald Trump made an appearance at the Supreme Court Building, where Justice Ruth Bader Ginsburg’s body is lying in repose for a second day —
by Britni de la Cretaz
News
What Does Justice For Breonna Taylor Even Look Like Anymore?
After more than 100 days of protests and two separate investigations into the police killing of 26-year-old Breonna Taylor, a grand jury on Wednesday faile
by Erin Corbett
Discover
R29 Stories & News
Watch
R29 Original Series & Films
Shop
R29's Most Wanted