Skip navigation!
Story from Entertainment News
Though Wills was a heartbreaker back in the day, for the past decade or so, Prince Harry has been the official royal hottie (to reference some late '90s royal jargon). For girls dreaming of an endless supply of McQueen and a sparkly tiara, Harry's the last chance for a title, not to mention a best friendship with the great Kate. Well, wannabe duchesses should rethink that trans-Atlantic Olympic trip — it looks like there might be a new Chelsy Davy in the picture. Like Harry's former on-again off-again girlfriend, the lady in question — one Cressida Jones (no, we didn't make that up) — is a leggy blonde , albeit with a posher pedigree.
Advertisement
The two were reported to be each other's dates to Wednesday night's London premiere of The Dark Knight Rises, followed by an appearance at an official after-party, then, in true Prince Harry style, a romp at Le Salon nightclub, a favorite in the privileged set's bottle-service rotation. Though they avoided being photographed together, numerous sources report that the two were canoodling all night. Basically, this rumor is pretty credible.
So, who is this chick? Just a Burberry model. NBD. That, and the daughter of society types Jeffrey Bonas and Lady Mary-Gaye Georgiana Lorna Curzon, a glamourous '60s socialite. While spokespeople are remaining mum (never a good sign), we're not throwing in the towel quite yet...someone's gotta convince Middleton that there's more to shoes than L.K. Bennett. Maybe this is our girl? (Huffington Post UK) 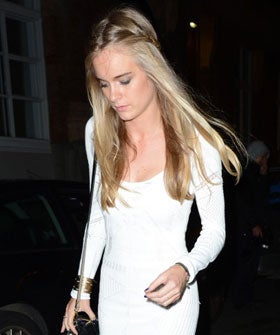 Entertainment
Actress Kelly Preston Dies At 57
At age 57, Kelly Preston has died. The Hollywood actress passed away yesterday after a two-year struggle with breast cancer that she and her family had dec
by Ineye Komonibo
Entertainment
California Police Are Searching For Missing Glee Actress N...
Local police in Southern California are continuing their search for Naya Rivera near Lake Piru after discovering her young son alone on a boat. According t
by Ineye Komonibo
Entertainment
Justin Bieber Denies Sexual Assault Allegations On Social Media
Days ago, Justin Bieber was accused of sexual assault in a now-deleted Twitter thread that detailed a harrowing encounter between the star and a fan in 201
by Ineye Komonibo
Entertainment News
Ansel Elgort Denies Allegations Of Sexual Assault In Apology To H...
Ansel Elgort has denied an allegation of sexual assault that appeared on Twitter last week. In it, Twitter user @Itsgabby accused the West Side Story actor
by Kathryn Lindsay
Entertainment News
Beyoncé Demands Justice In Passionate Letter As Breonna Taylor...
Your social media timelines may have resumed their normal activity following the trendy black squares, but the uprising against racism hasn’t lost an
by Ineye Komonibo
Entertainment News
California Sues Studios For Sexual Harassment On The Set Of Cr...
In a nearly unprecedented move, California’s Department of Fair Employment and Housing filed a lawsuit against the various studios behind CBS’ Crim
by Britni de la Cretaz
Entertainment News
Matt Lauer Responds To Rape Claim & Calls Out Ronan Farrow’...
Matt Lauer has reared his head for the first time since his 2017 #MeToo reckoning to speak out against Ronan Farrow and a claim made in his book Catch and
by Kathryn Lindsay
Entertainment News
Mary-Kate Olsen Reportedly Desperate To Finalize Divorce
After five years of marriage, Mary Kate Olsen is reportedly divorcing husband Pierre Olivier Sarkozy, according to TMZ. Fashion mogul Olsen and Sarkozy, a
by Kaitlin Reilly
Entertainment
Little Richard, The First Rock Star, Is Dead At 87
Little Richard, a pioneer and icon of rock ‘n’ roll, died Saturday at the age of 87. His son, Danny Jones Penniman, said his father succumbed to bo
by Araceli Cruz
Entertainment News
Roy Horn Of Siegfried & Roy Is Dead One Week After Coronavirus Di...
On Friday, entertainer Roy Horn died of COVID-19 at the age of 75. Horn, known for being half of the German duo Siegfried & Roy, passed away in Las Veg
by Araceli Cruz
Pop Culture
The Feds Are Off The Hook In The College Scam Case, But Lori Loug...
Lori Loughlin and her husband, Mossimo Giannulli, were handed a major setback in the ongoing college scam case. A federal judge refused to dismiss the char
by Tanya Edwards
Entertainment News
Britney Spears: Her Conservatorship, Health Crisis & The Conspira...
In the spotlight for two decades, Britney Spears is a pop icon for a generation. She has also become a cottage industry, selling more than 33 million album
by Courtney E. Smith
Discover
R29 Stories & News
Watch
R29 Original Series & Films
Shop
R29's Most Wanted