Skip navigation!
Story from Relationships
Photo by Issey Gladston/Courtesy of Lover Management.
Iona David never meant to be the gatekeeper of a modern day dating archive, in fact it all started out as a joke. She tells me the account’s founding was in part motivated by her own dating failures. When @beam_me_up_softboi was born, David had just left a relationship with a dubstep DJ – “not my last one unfortunately, but the first one is always the worst one”. She fell for him hard and fast, with his bio that read ‘making music and rolling weed are the only things I know how to do’. “I thought – fuck – that is so hot,” she cringes. I suppose we can’t help who we love.
Advertisement
We meet in the days leading up to the launch of her book, Is it Love or Dopamine: A Deeply Unofficial Study of Dating in the Digital Age. It is not a how to guide, more a how not to guide for internet dating directed at men. Written with self-deprecating humour and plenty of pop culture references (David really loves Love Island) the book is divided into chapters that analyse online dating etiquette, including a breakdown on why ‘hehe’ should never be part of digital flirting, as well as first date drama and inevitable breakups.
David is nursing a hangover from her publishers’ summer party the night before, her makeup is flawless despite the unlimited bar. It is somewhat strange to meet the face behind an internet page. David has unknowingly provided my friends and me with many laughs, with soft boi submissions becoming a kind of shortcut to understanding my internet acquaintances’ humour – if they were reposting soft bois, I knew we’d get along just fine.
So it’s worth establishing here, what is a soft boi? “The soft boi is the evolved fuck boy. They are emotionally literate [but not mature], which is scary,” she explains.

If you read through the soft boi page, between the jokes and earnest attempts at being ‘cool’, there is a soft boi language that emerges. It is an adoption of feminist phrasing, theories and social movements in an attempt to appeal to women, but it’s just the same old slimy crap men trying to get laid have pulled before. David’s page is at once an exposure and a point of communion for the women who are subjected to this.
Advertisement
Although @beam_me_up_softboi appeared for a long time to be controlled by some kind of dating vigilante or ultimate troll (depending on your perspective), David’s friends knew it was her from the start. “I started it off the back of another meme account I ran at uni, so I was never hiding it [from anyone],” she tells me. Beam Me Up has become a kind of cultural touch point for a subsection of Instagram users who must laugh otherwise they’ll cry at their own dating experiences.

You’d be forgiven for assuming that men who want to date women are top of David’s shit list but as she reiterates to me, as well as multiple times at the start of her book, she doesn’t think all soft bois are bad.
In an early chapter she includes a long footnote about how the original thesis for the chapter was “a soft boi morality scale” but swiftly decided she was not a dating god and had no authority to preside over soft boi rankings. However, she goes on to outline some distinct categories, the most admirable being the wholesome ones: “well intentioned, like the friendly barista at a coffee shop wearing a Joy Division T-shirt under his apron, who gives you your drink for free before you can protest, turns around and disappears”. Then she heads a bit further down hill to “gatekeeping soft boi” to the one who schools you in a little known band called Radiohead, before a steep decline into “self-aware as a weapon soft boi”. He is the emotional manipulator who wants your nudes and calls you a bad feminist when you refuse.
Advertisement
It is at this point that I realise, to my horror, I am in love with a soft boi of my own. But David assures me he is the wholesome kind, cementing the idea that there are indeed soft bois everywhere.

In fact, even though David thought the account would run out of content, the soft boi species just seem to be growing. You might think (or hope) that emotionally manipulative or poorly mannered men are only a small part of the current dating landscape but she tells me that she receives over 500 submissions a week and the window into people’s lives can feel surreal. “It’s like being sent snippets of people’s dates where the men don’t know they are being recorded”, she tells me, before adding “it’s like 1984”.
David hesitates. “Fuck, I can’t believe I just said that. That is such a soft boi thing to say.”
Being an administrator of such an account takes its own kind of toll beyond soft boi phrases infecting her daily speech. The day-to-day is as tedious as you imagine – “it's like an almost full time, unpaid job” – and it comes with the fun perks every woman online is lucky to endure. “There are a lot of angry online men but no more than you would expect for any vaguely feminist leaning instagram account,” she says.
While it was started as, and still acts as, a comedic outlet, David finds that the submissions are getting darker and the balancing act between being funny and helpful is harder to negotiate.
Advertisement

Being privy to intimate interactions, although often without context, can still illuminate worrying behaviour which David didn’t feel fully equipped to comment on. However, she does recognise when submissions appear to lean into worrying territory and will reply warning of ‘red flag behaviour’. She reiterates that the account was only ever meant to be a joke and shares resources when she thinks necessary but adds “sometimes I feel like it should be in the hands of someone less stupid”.
The most recent content posted to Beam Me Up may look like there are more awful interactions occurring on dating apps than ever before, but David doesn’t think it is necessarily a downward spiral. “It is more that people want to laugh at the worst ones, so I guess I will post those now because with the number of submissions, the awful ones make their way to the top of my inbox," she says. She does think it may have also gotten a bit meta. “So many Hinge prompts were, what is your worst nightmare? And their response said 'ending up on Beam Me Up Softboi'. So I used to open with ‘I am Beam Me Up Softboi’ to new guys on dating apps, but that seemed to be a bad idea, for many reasons."
Photo by Issey Gladston/Courtesy of Lover Management.
Through exposure to so many soft bois in her dating life as well as on Instagram, David started to think this genre of man was the reason her dating life wasn’t going to plan. “I started to date the anti soft boi, but they aren’t interested in the same things [music, film etc]. I thought that meant they were good people, but then they just fuck you over anyway, and … they’re dressed badly,” she explains.
For now, David is still waiting to find her own soft boi – preferably one who isn’t a dubstep DJ, but she does admit, she still can’t resist the Carhartt beanie. I guess we all have a cross to bear. 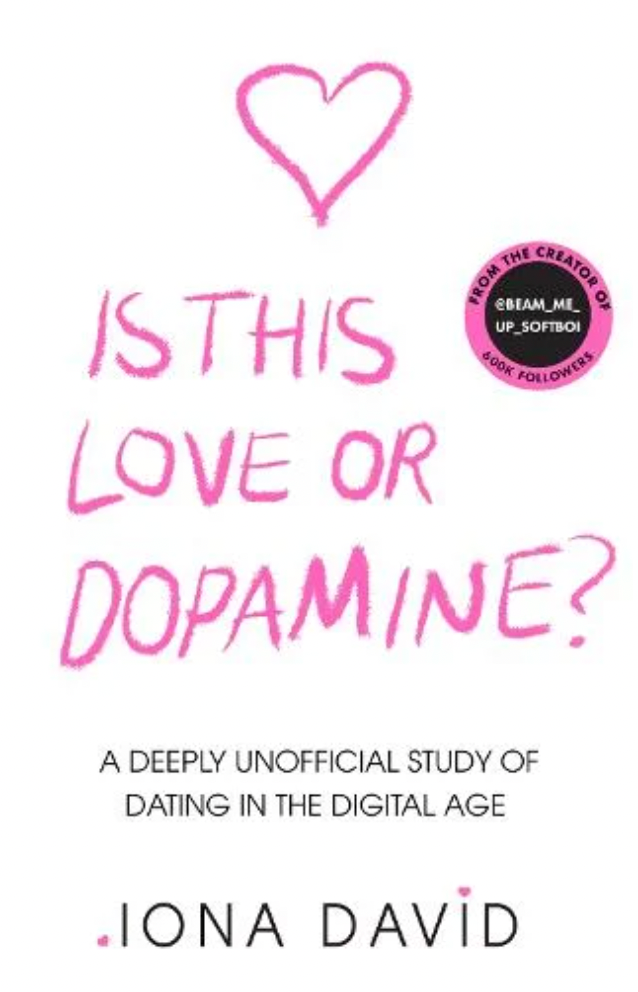 Harper Collins Publishers
Is This Love Or Dopamine? By Iona David
£13.94£14.99
bookshop.org
Relationships
Everyone Gets Relationship Jet Lag – Here’s What You Need T...
Coming home after a long day to a loving partner is a gift in this godforsaken world. But often – and especially now, after two years away from the offic
by Sadhbh O'Sullivan
Sex
Let’s Face It, Being Horny Is Fundamentally Embarrassing
Horniness is often portrayed as a whimsical force. The cartoon wolf with his eyes popping out of his sockets and tongue rolled red carpet-like across the f
by Emma Garland
Unbothered
Joy Ofodu On Dating, Relationships, & Being Boo’ed Up On Instagram
It’s officially cuffing season, y’all. And that means it’s time to rock cosy sweats and pluck a cutie off the bench to binge-watch festive movies and
by Taiia Smart Young
Advertisement
Dating Advice
Love Bombing Can Feel A Lot Like Romance — Here’s How To Tell The...
In the beginning, everything seems perfect. They text you all the time, shower you with gifts and compliments, and dote on you in a way no one has before.
by Giselle Bueti
LGBTQ+
What People Get Wrong About Bisexuality, According To 27 Bi Babes
by Maggie Zhou
Relationships
I Spent My 20s Single Because Dating When Autistic Feels Impossible
“I’ve always noticed how I tend to lag behind other people and this is certainly something that makes me feel like I’m doomed to be perpetually b
by Sadhbh O'Sullivan
Unbothered
‘Pick Me’ Women Just Want To Be Chosen. So Why Are They Judged So...
I unknowingly grew up with ‘pick me’ women. Though the term “pick me” was born from irreverent discourse on Black TikTok  —  us
by Kedean Smith
Living
Wait, Did I Just Soft-Launch My Own Breakup?
If soft-launching a relationship involves posting a photo with that person’s hand in shot, two pints instead of one, or an extra pair of legs resting bes
by Hannah Van De Peer
Relationships
Ask A Therapist: I Can’t Stand My Mum Anymore. What Should ...
Ever wondered what you’d say to a therapist, given the chance? We asked Dr Sheri Jacobson, a retired psychotherapist with over 17 years’ clinic
by Sadhbh O'Sullivan
Living
You’re Not Scared Of Failing, You’re Scared Of Succeeding
The fear of failure is intrinsic to the human experience. Anxiety around a job application, a blooming crush or an important test is to be expected. But wh
by Maggie Zhou
Living
I’m Relieved My Dad Died – Why Is That So Shocking To Hear?
When I read Jennette McCurdy’s memoir title, I breathed a sigh of relief. Naming her book I’m Glad My Mom Died may be shocking and attention grabbing ?
by Flora Baker
Living
The Real Problem With The Stay-At-Home Girlfriend Trend
Tickling our voyeuristic sides has never been easier in the digital age. With a few taps on a phone screen, you can find out what someone had for breakfast
by Maggie Zhou
Advertisement
Advertisement