Skip navigation!
Story from Beauty
Photo by Sarah Harry Isaacs.
There are countless myths associated with rosacea: it's just blushing; it's caused by drinking; makeup makes it worse. One of the most common misconceptions is that only white people experience the skin condition.
Although more prevalent in people with fairer skin tones, those with darker skin are prone to rosacea, too. While experts say that it is actually more common than you might think, rosacea in darker skin is often misdiagnosed, which leads to lots of confusion and frustration when it comes to skincare and treatment.
Ahead, three skin experts break down what you need to know about rosacea in dark skin and how best to treat it.
Advertisement

Rosacea is an inflammatory skin condition. While it can present in a number of ways, says London-based consultant dermatologist Dr Justine Kluk, it often begins with a tendency to flush or blush more easily. "With time, that warm sensation can become more constant and people may develop permanent redness of the nose and cheeks along with a selection of other symptoms, such as spots, dilated blood vessels, skin dryness and scaling, burning and stinging, and sensitivity to multiple skincare products."
Rosacea can also affect the eyes, says Dr Thiviyani Maruthappu, consultant dermatologist and British Skin Foundation spokesperson. "Patients may have swollen eyelids, crusting, burning or stinging in the eyes," while Dr Kluk pinpoints swelling of the nose or cheeks as a rarer symptom.

While skin experts are not quite sure exactly what causes rosacea, there is a handful of common triggers. "They include sunlight, stress, heat, alcohol (especially red wine), spicy foods, hot drinks, wind and cold, physical exertion and some skin and haircare products," says Dr Kluk.

What does rosacea look like in darker skin and why is it often misdiagnosed?

Research has found that diagnosing rosacea is often delayed or missed in those with darker skin. "Rosacea can be more tricky because the earliest symptom is often facial redness and flushing, which can be masked by background pigmentation," says Dr Maruthappu. "A more readily recognisable symptom is stinging or burning and sensitivity to topical products. Rather than redness, darker or dusky brown patches may appear on the face instead in combination with acne-like breakouts." Dr Kluk adds dryness or swelling and thickening of the skin on the nose, cheeks, chin and forehead to the list of symptoms in dark skin.
Advertisement
Rosacea in dark skin is actually more common than people think, says Dr Ewoma Ukeleghe, skin expert and founder of SKNDOCTOR. "Research suggests that rosacea may affect up to 10% of the ethnic population globally. Based on what I see in clinic, symptoms (most commonly papules, which are raised areas of skin) are typically concentrated to the cheeks." Dr Ukeleghe adds: "Rosacea is also associated with post-inflammatory hyperpigmentation, oiliness and mild redness, the latter usually on fair skin of colour. Such clients also report more sensorial symptoms, such as burning, stinging or heightened sensitivity to the affected areas."
Dr Ukeleghe says it is also worth noting that a lack of education and possibly ignorance is a real issue among clinicians. "Standard medical training doesn't address how common skin conditions appear on skin of colour," she says, which often results in underestimating rosacea in darker skin tones.

What should you do if you suspect you have rosacea?

If you suspect you might have rosacea but are yet to be diagnosed, Dr Kluk suggests reporting it to your GP or a dermatologist so that they can carry out a thorough consultation. Make a list of your symptoms and come prepared with pictures, as rosacea can fluctuate. The Black Skin Directory is a particularly helpful platform for locating skin experts and clinics armed with the specific tools and resources needed to diagnose and treat skin of colour.
Advertisement

How can you treat rosacea in darker skin?

According to Dr Ukeleghe, the approach for treatment is pretty much the same, regardless of skin type. She adds that in darker skin tones, treatment may also help manage post-inflammatory hyperpigmentation but that the key to nailing a skincare routine is simplicity.
"You're going to need to improve your skin barrier function," says Dr Ukeleghe. "This includes avoiding alcohol-based products and harsh exfoliants." Dr Maruthappu seconds this. "I would advocate being cautious with exfoliation. I have recently seen more rosacea flare-ups in darker skinned patients due to overexfoliating, for example aggressive scrubbing and combining this with chemical exfoliants (such as glycolic acid) which can irritate rosacea-prone skin."
The right cleanser is important, too. "Make it gentle and fragrance- and soap-free. Use it twice a day," says Dr Maruthappu. Your chosen cleanser should also contain emollients (which sit on the surface of the skin and prevent moisture from escaping), such as glycerin. "Use lukewarm water and massage gently, then rinse and pat dry with a clean, soft cotton towel." 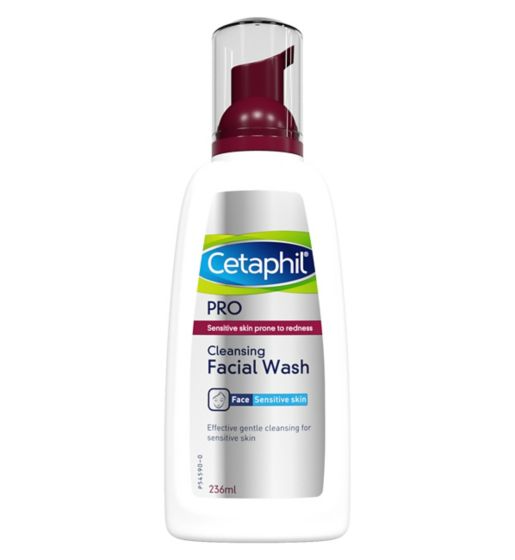 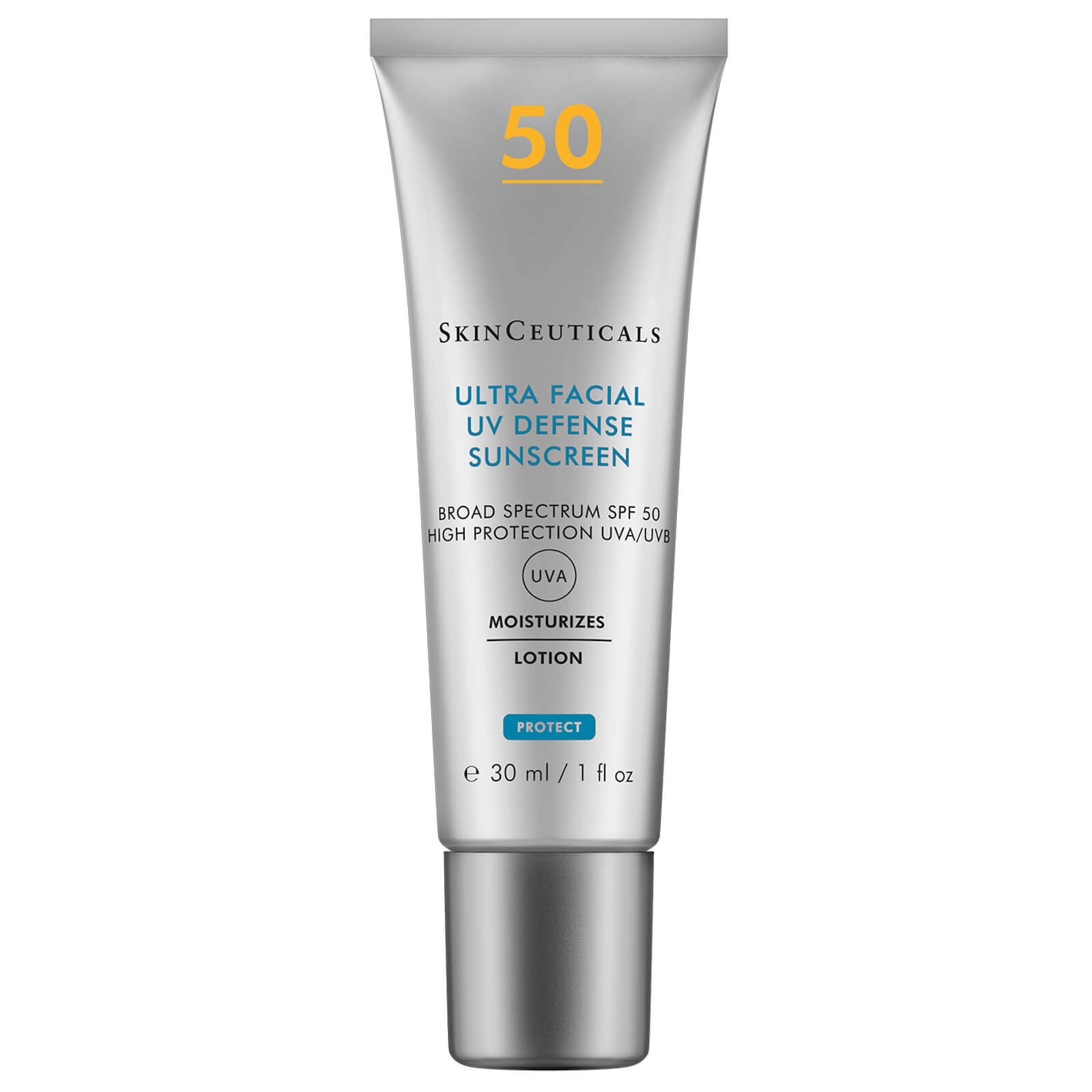 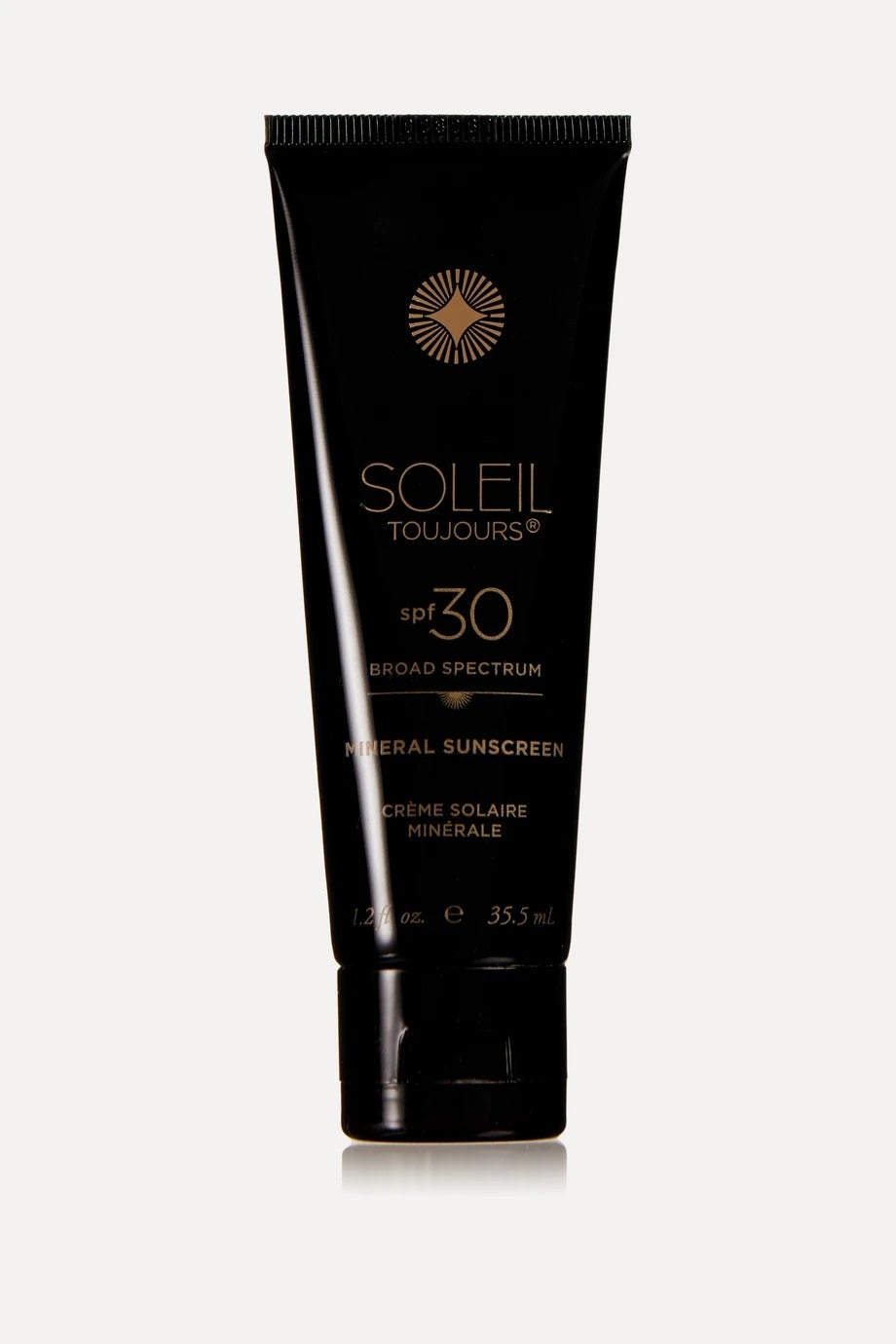 Soleil Toujours
Spf30 Mineral Sunscreen
£26.00
Net-A-Porter
Dr Ukeleghe says that silicone-based moisturisers are found to be beneficial, while Dr Maruthappu rates ingredients such as niacinamide and antioxidants. Both experts hit home the importance of using SPF during the day to protect skin from UVA and UVB rays. "Physical sunscreens are best as they tend to be less irritating than chemical sunscreens," says Dr Ukeleghe. "Frustratingly though, physical sunscreens tend to be ashy in appearance, so picking specific skincare products will be a matter of trial and error, especially due to the sensitivity typically seen in rosacea."
Advertisement 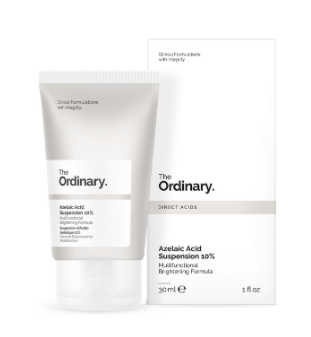 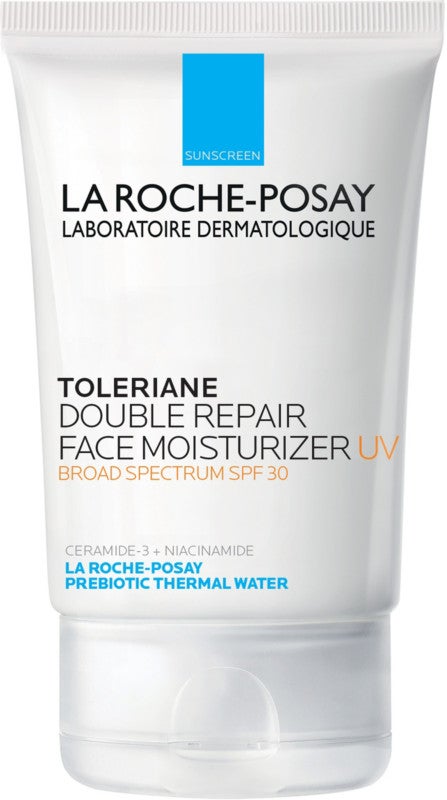 La Roche-Posay
Toleriane Double Repair Face Moisturizer U...
$19.99
Ulta Beauty
Paula's Choice Sunscreen SPF 50 for Face & Body, £21, and Extrème UV Face Mineral Sunscreen SPF 45, £45, are both great mineral sunscreen options for darker skin.
Dr Kluk recommends the Cetaphil PRO range. "Massage your cleanser gently into your skin morning and night and rinse off with lukewarm water. Then, find a 'broad-spectrum' facial sunscreen with no less than SPF30 and apply it every morning, 365 days a year. Apply a moisturiser before bed to help soothe the skin, relieve dryness and strengthen your skin barrier," she says.
Dr Kluk also suggests paying extra attention to product labels and being cautious of products that contain menthol, camphor or sodium lauryl sulphate, or those that are heavily fragranced. "These can trigger rosacea flare-ups," she says. "Also avoid other known skin irritants like acids or retinoids unless under the supervision of a specialist. Wherever possible, get testers or samples to try at home before committing to bulk purchases of any new skincare product and do a patch test on a small area before applying to your whole face if you have very reactive skin. Be kind to your skin and don’t rub, scrub or vigorously massage your face. Finally, there are some excellent products that neutralise the redness of rosacea and can really boost skin confidence." Here are the experts recommendations for tackling rosacea.
Advertisement
Dr Ukeleghe mentions that if you can speak to a skin specialist (lots are offering digital consultations right now), prescription skincare or laser therapy (once clinics reopen) are other effective avenues to explore. That said, rosacea is very individual, according to Dr Maruthappu. "Skin tone must be carefully considered when planning laser or light treatments as these may or may not be suitable depending on the richness of skin pigmentation."
Arm yourself with knowledge before speaking to a skin specialist. The British Skin Foundation website is a great resource for finding out more about rosacea, as is the British Association of Dermatologists and the Black Skin Directory.
Refinery29's selection is purely editorial and independently chosen – we only feature items we love! As part of our business model we do work with affiliates; if you directly purchase something from a link on this article, we may earn a small amount of commission. Transparency is important to us at Refinery29, if you have any questions please reach out to us.
Beauty
This £12 Cream Is The Best For Effortlessly Air-Dried Hair
If you had told me earlier in the year that I would be exclusively air-drying my hair this summer, I wouldn’t have believed you. Usually, my hair and
by Jacqueline Kilikita
Beauty
9 Special Perfumes Editors Predict Will Be The Next Baccarat Rouge
by Tori Crowther
Skin Care
5 Ingrown Hair Treatments That Keep Bumps At Bay
by
Advertisement
Beauty
This Lip Plumping Treatment Rivals Filler — & There Are No Needles
From the lip flip (using Botox to enhance lip size) to lip blushing (tattooing the lip line to lend lips definition) it seems we’re willing to try ju
by Jacqueline Kilikita
Skin Care
How To Tell A Good Serum From A Bad One (& Other Vitamin C Tips)
Alongside SPF, retinol and a gentle cleanser, skin experts often tout vitamin C as one of the most beneficial ingredients to add to a simple, everyday skin
by Jacqueline Kilikita
Beauty
19 Late Summer Haircut Trends Dominating London Salons Right Now
by Jacqueline Kilikita
Beauty
This Is The New Way To Wear Mascara
Refinery29’s selection is purely editorial and independently chosen – we only feature items we love! As part of our business model we do work with
by Maggie Zhou
Beauty In A Tik
TikTok’s Homemade Lip Stain Is Impressive — But There’...
Welcome to Beauty In A Tik, where each week we put TikTok’s viral beauty hacks and innovative trends to the test. TikTok‘s obsession with homem
by Jacqueline Kilikita
Unbothered
TikTok Just Made Me Aware Of My Double Lip Line — Now What?
TikTok beauty trends have a unique way of making me feel both seen and exposed. I’ll explain. In the pursuit of finding niche beauty hacks that work on m
by L'Oréal Blackett
Beauty
Harry Styles Unveiled More Pleasing Beauty & Here’s What We...
by Esther Newman
Shopping
Why This Celeb-Favourite £215 Serum Is Seriously Worth The Splurge
I try a lot of skin-care products, both as part of my job and because I love it. As such, everything from Cetaphil cleanser (which, love) to triple-digit m
by Karina Hoshikawa
Beauty
Is Your Hair Dry — Or Do You Have Protein Overload?
If your hair is on the thirsty side, you’re not alone. This summer has been a scorcher and with intensely hot sun come seriously parched strands. The
by Jacqueline Kilikita
Advertisement
Advertisement