Skip navigation!
Story from Books & Art
The following is an extract from Outraged: Why Everyone Is Shouting and No One Is Talking. After falling down the Twitter outrage rabbit hole surrounding an H&M sweatshirt in 2018, the BBC Radio 1Xtra presenter and rapper Ashley 'Dotty' Charles found herself frustrated. As she writes in the introduction: "Suddenly it bothered me that in a world where racism was already jumping off the page, we were going in search of it by reading between the lines. That we were being outraged by the faint whiffs of racism next door rather than attending to the almighty stench of it on our own welcome mat." In the digital space, we are encouraged to be outraged by everything – but it only distracts us from fighting the biggest problems we need to tackle. And so, her book was born. Taking a long, hard look at how we use our anger and energy online, the book forces you to reevaluate where you channel your outraged energy, and how you can use it to really change the world.
Advertisement
‘Don’t boo. Vote,’ said Barack Obama in 2016.
Those simple words, spontaneously uttered at the Democratic National Convention, tell us everything we need to change about outrage.
The problem is, we wave our fists at our issues instead of taking a swing at them. We intellectualise society’s faults, dissecting them on our Facebook pages, debating them on Twitter and untangling them in blogs, feeding into our self-serving agendas of perception and popularity – but rarely do we make the necessary strides to effect change in the real world. We boo, but we don’t vote. And if I learned anything writing this book it is that we need to transfer our resistance from the Internet to the real world and reignite the purposeful outrage that drove society forward in the offline era.
Even habitual provocateur Katie Hopkins conceded to me ‘we’d both probably argue that me gobbing off on Twitter is not gonna change anything. So how do you impact or effect real change? That is the challenge for Hopkins.’ And if the bigots who speak in the third person have figured it out, it’s about time we did too.
So rather than using our narcissistic apps simply to narrate our experiences in this twenty-first-century social cesspit, it’s time to figure out how we’re actually going to get out of it. Let’s stop talking about what we’re going through and work out where we’re going to! Perhaps by extending the reach of our tribes, we can ensure that our voices reverberate far beyond the confines of our own echo chambers. For with 3 billion of us actively using social media every day and 90.4 per cent of the world’s millennials engaging with at least one digital platform, we certainly have the manpower to make a difference with our outrage. If four teenagers from Greensboro could spark a revolution at a lunch counter in Woolworth’s, surely we can do just as much with the world’s greatest innovation in the palm of our hands?
Advertisement
But if we are to use the progressive power of the Internet to truly rediscover the currency in our outrage, then there are a few things we need to change first…
First (and it’s abundantly clear): We must reacquaint ourselves with the block button. Immediately. Katie Hopkins thinks we were bonkers to pay her so much attention. So sometimes it is necessary to switch off. If it’s causing you undue stress: block. If a debate has reached an impasse: block. If you have to question whether or not to block: block.
Second: Refrain from embarking on moral expeditions just because you’ve convinced yourself that you’re supposed to. It is time to stop pretending that you care about every fucking thing. Stop forcing yourself to be woke. We can all see that you’re faking it.
Third: Fact-check, fact-check and then fact-check again. Our judgement has been impaired by a social media phenomenon that has blurred the lines between what’s real and fake, encouraging us to be fast instead of factual. Take your time. Read the article, not just the clickbait headline. Verify sources. Kick the tyres before you jump on the bandwagon. Or you’ll find yourself campaigning against the removal of a fountain that was never actually going anywhere.
And fourth: When it comes to expressing outrage, we must have these conversations offline as well as on. We must be active as well as vocal. When dragging Ryanair for their mishandling of a racist passenger, we must send formal emails or letters as well as vengeful tweets.
Advertisement
“

Purposeful outrage can allow us to make headway in a world flooded with injustice. So I implore you to be outraged with dogged ambition, with fervour and tenacity.

”
When Stephanie Yeboah noticed a diversity problem on the women’s fashion website PrettyLittleThing in 2018, she was invited to the company’s Manchester headquarters to discuss their lack of plus-size representation. The following year, PrettyLittleThing unveiled a plus-size campaign modelled by dark-skinned black models. It was a change that had been prompted by a conversation as well as a call-out.
And a few months after our first chat, I received a jubilant email from Stop Funding Hate’s Richard Wilson, who was keen to update me on a significant development. The organisation’s focused outrage and composed campaigning had contributed to new measures being taken by the United Nations, who had released proposals for ‘stopping allocation of public funding or material support to media outlets that systematically promote intolerance, xenophobia, racism and other forms of discrimination towards migrants’. In other words, the UN wasn’t gonna stand for any more of the bullshit. ‘This is the first time that the idea of ethical advertising as a mechanism for making media hate unprofitable has been recognised in an international agreement,’ Richard told me. The outraged were launching a takedown of the outrage-mongers and it had taken over a year of engagement between Stop Funding Hate and the United Nations.
Still think your forty-eight hours of fury will have a lasting effect?
Sometimes we need to call people out on their fuckery. Grave misdeeds shouldn’t, by any means, go unchecked. But if we are to avoid becoming one embarrassingly ineffectual voice of dissent, it is time to realise that outrage is not a novelty and start treating it like the weapon of progress it once was.
Advertisement
So the next time you think of frivolously investing your outrage, ask yourself: is this worth my time or my energy? Is it an outrage venture that will pay more than just performative dividends? Or am I simply spending recklessly? Do I actually have an axe to grind or do I just like the idea of standing for something?
Purposeful outrage can allow us to make headway in a world flooded with injustice. So I implore you to be outraged with dogged ambition, with fervour and tenacity. Create constructive tension. Pick your battles and then fight them tirelessly, with unrelenting resolve and clear-headed certainty. Find your motivation in truths rather than trends.
I will never relinquish the power of my outrage. I am simply learning to use it wisely, and I suggest you do too. Make outrage great again.
Copyright © Ashley Charles 2020. This is an extract from OUTRAGED: Why Everyone is Shouting and No One is Talking by Ashley “Dotty” Charles, published by Bloomsbury Circus at £14.99 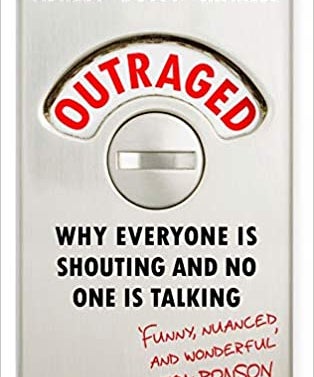 Bloomsbury
Outraged: Why Everyone Is Shouting & No On...
£10.78£14.99
Amazon
Books & Art
All The Audiobooks You Can Listen To For Free, Without A Subscrip...
by Alicia Lansom
Books & Art
The Sordid Tale Of The Woman Who Scammed Marie-Antoinette
Excerpted from Confident Women by Tori Telfer. Copyright 2021 by Tori Telfer. Published with permission from Harper Perennial and HarperCollins Publishers.
by Tori Telfer
Books & Art
The Artists That Shaped Angelcore – The Internet’s ‘Girliest’ Aes...
How would you define your personal style? Which celebrities or trends, music or eras would you reference to help sum it up? What if you were asked to reduc
by Joanna Cresswell
Books & Art
BookTok Is The Last Wholesome Place On The Internet
View this post on Instagram A post shared by ✰ Ayman ✰ (@aymansbooks) If you were starting to think that social media was filled purely with angry peop
by Alicia Lansom
Books & Art
My Tinder Boys: A Photographer Flips The Gaze On Her Dating App M...
When Chinese photographer Yushi Li moved to the UK in the mid-2010s to study, she signed up for Tinder to meet some new people. Dating had been different f
by Joanna Cresswell
Entertainment
R29 Reads: The Books We’re Picking Up This February
by Alicia Lansom
Books & Art
11 Fiction Books About Black Joy You Need To Read Now
by Jessica Morgan
Books & Art
Loved Amanda Gorman’s Inaugural Poem? There’s More Where That Cam...
On US Inauguration Day, many prepared themselves to fawn over the star-studded lineup of performances, from Lady Gaga’s Broadway rendition of the Nat
by Natalie Morin
Books & Art
Photographing The Last Few Precious Years Of Girlhood In Rural India
“As soon as those first drops of blood trickled between my thighs, my world changed,” says Indian photographer Deepti Asthana, recalling the fi
by Joanna Cresswell
Books & Art
This Virtual Library Is Offering Free Books During Lockdown
A new virtual library is to offer free books during the latest lockdown. The virtual library has been created for children in England by The National Liter
by Nick Levine
Books & Art
Normal People‘s Sally Rooney Has A New Story For You
While we embraced a “new normal” in April 2020, BBC’s Normal People allowed us to lose ourselves in the a sexy-but-still-sad romance. Luc
by Natalie Morin
Unbothered
Angie Thomas’ Concrete Rose Is Advocating For Blac...
Angie Thomas didn’t plan on writing a prequel to The Hate U Give. But as Starr’s dad, Maverick “Big Mav” Carter, became a favourite among her r
by Stephanie Long