Skip navigation!
Story from Shopping
Every season, there seems to be one piece that’s having a moment — it’s stocked in all of our favourite stores, posted all over our feeds, and even showing up IRL worn by those with most enviable style. Welcome to Micro-Zeitgeist, a recurring deep dive on that one item that’s invading our collective shopping consciousness.
We don’t quite remember the moment that we realised this specific coat had reached ubiquitous cool-person status. Was it hanging on the coat rack at our friend’s intimate Christmas party, or the sight of two skateboarders twinning in red and yellow versions of the colourblocked puffers as they rolled down the road? Was it when we spotted it in the outerwear sections of retailers as diverse as SSENSE and Urban Outfitters, all with dwindling inventory levels? All we know is that The North Face’s “Nuptse” puffer is everywhere this winter, and we want to know more.
Advertisement
Instantly recognisable thanks to its boxy shape, vertical baffles, and high-contrast colourways, the jacket originally launched in 1992, engineered for actual Himalayan expeditions. It was immediately embraced by the hip-hop community, giving it an added dose of cred, and appeared on the backs of a multitude of rappers throughout the ’90s. The North Face decided to revisit the style in 2017. “In recent years, we’ve seen our biggest fans returning to our most iconic products,” explained Tim Bantle, The North Face’s GM of Lifestyle. So much so that The North Face now has a whole section on its site devoted to classic styles they dub as “Icons.” Clearly, they made the right call: “As a 90’s reissue, this puffer is just as relevant now as then — we’ve had continuously sold-out sales through holiday season and into the new year,” says Urban Outfitters Chief Merchandising Officer Gabrielle Conforti. 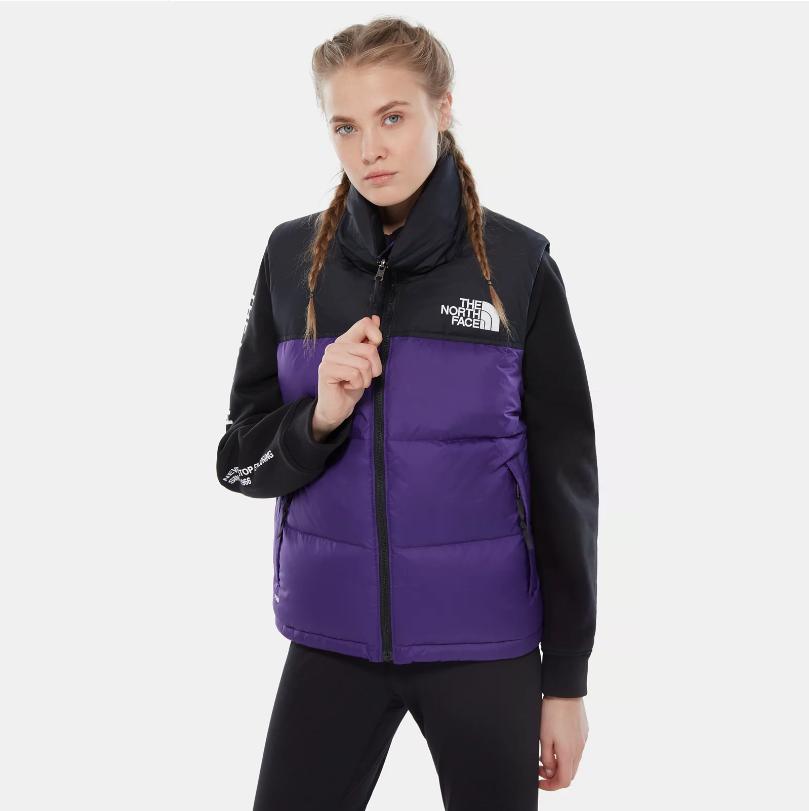 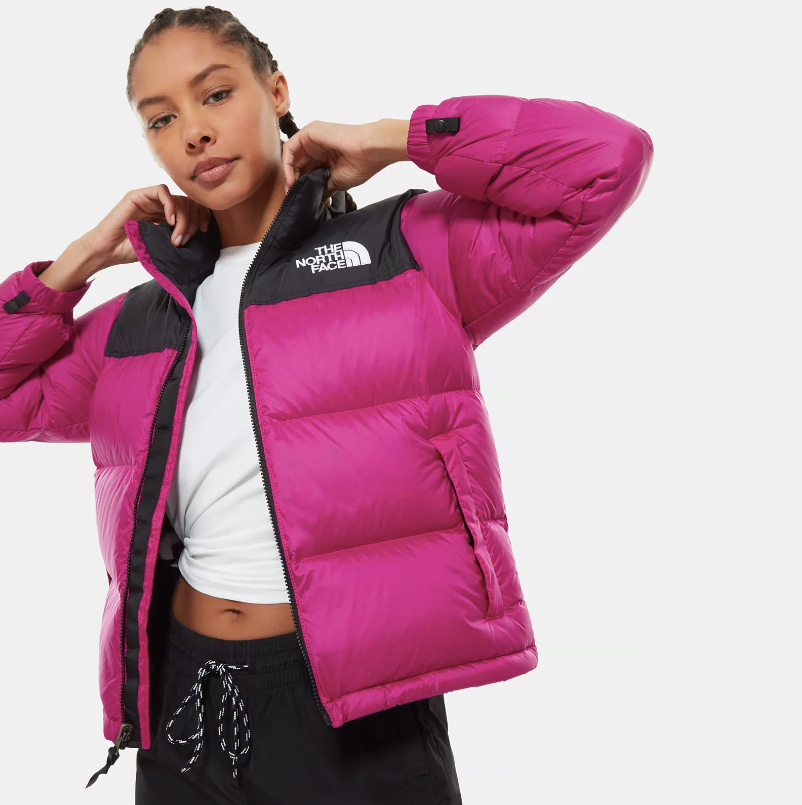 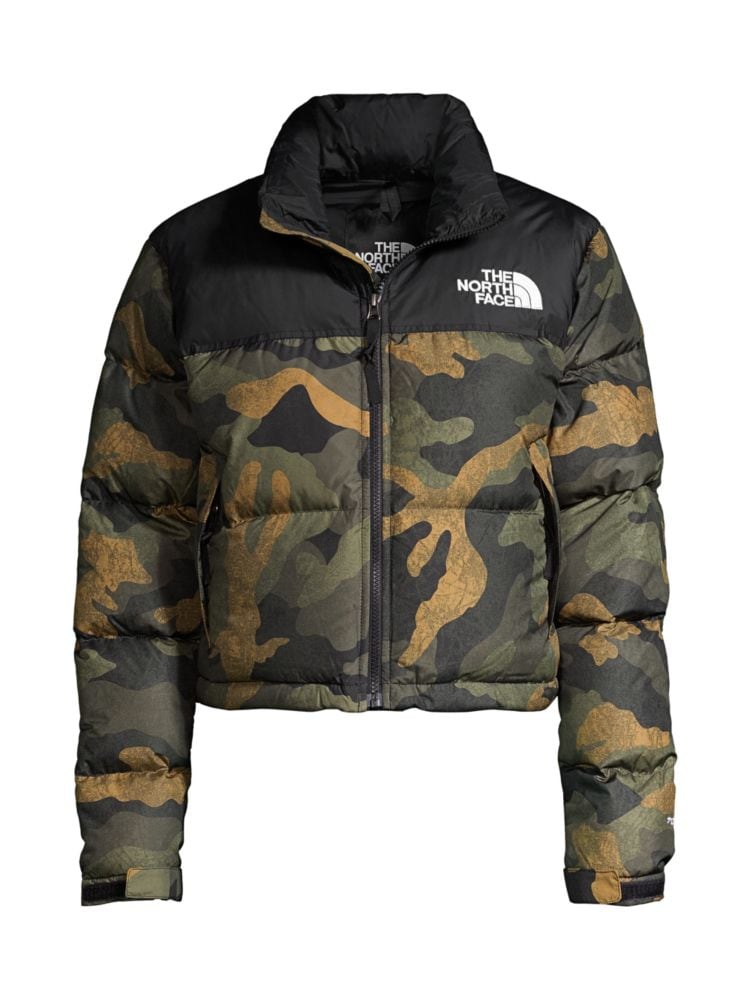 The North Face
Nuptse Relax-fit Crop Puffer Jacket
£230.00
The North Face
Armed with this knowledge, we knew it was time to go a-stalkin’ in real time. We stopped Charlotte Paffe — who coincidentally turned out to be the e-commerce director at Innisfree, one of our go-to spots for K-beauty goods — on her way to Pilates after we spotted her in the less-seen olive drab colourway. “My brother actually bought this for me at the Urban Outfitters in LA — it was totally sold out in my size in all North Face stores in New York,” she told us. We had to know: why is this particular puffer a must-have? “It has a ’90s feel that makes it relaxed but still cool, plus it's super warm and functional.”
Advertisement
We also spoke to R29's creative assistant Serena Brown, who told us that “growing up in London, this jacket was literally a staple for everyone I know — I've always thought it was jokes that anyone from an explorer to a roadman wears it.” Brown remembers the puffer’s ’90s heyday — “It’s never left my little bubble,” she says — and she’s actually been through two iterations: “a cream-coloured one from eBay, and a white one that I actually got at North Face.” With winter winding now and the coat starting to go on sale, now’s the time to nab one — whether you track down a men’s or women’s style, the puffer’s rugged retro appearance is only getting better with age.
At Refinery29, we’re here to help you navigate this overwhelming world of stuff. All of our market picks are independently selected and curated by the editorial team. All product details reflect the price and availability at the time of publication. If you buy something we link to on our site, Refinery29 may earn commission.
Most Wanted
A Dual Review Of Anthropologie’s Most Popular Summer Dress
Refinery29’s dedicated Shopping team is back with another in-depth examination of an internet-revered item: Anthropologie’s Somerset Maxi Dr
by Vivien Lee
Fashion
23 Bikini Bottoms That Actually Cover Your Ass(ets)
by Alicia Lansom
Dedicated Feature
9 Vintage It Bags You Can Snap Up On eBay
by Esther Newman
Advertisement
Shopping
Hydration Packs Are Cool, Actually
I’ve always been a fan of backpacks, crossbody bags, and fanny packs for their practical, hands-free benefits. A girl has places to go and people to see,
by Karina Hoshikawa
Cool Jewelry
Earring-Wearers: Have You Tried Hoop Charms Yet?
The origin story behind NUE Hoops, a U.K.-based sustainable earrings brand, is a very sweet, very charming one. The concept — dreamt up by CEO, product d
by Jinnie Lee
Fashion
This Brand Does Minimalist Trainers Better Than Any Other
by Esther Newman
Fashion
8 Summer Trends We’re Actually Buying Into This Year
Last month’s heatwave wasn’t enough for our summer wardrobes. We’ve had our taste of true spring sunshine now and we’re desperate to say goodbye to
by Esther Newman
Fashion
The Best Occasionwear To Rent This Wedding Season
by Alicia Lansom
Guide To Great Sleep
I’ve Been Sleeping With An EMF-Blocking Stone For The Past ...
What’s the deal with sleep? [Doing my best Jerry Seinfeld here.] The kids don’t think they need it, the teens get too much of it, and the adult
by Elizabeth Buxton
Fashion
15 Summer Slides That Look More Expensive Than They Are
by Ebony-Renee Baker
Fashion
These Handbags Have Been Spotted On Every It Girl
In Refinery29’s Talking Shop series, we’re chatting with owners of up-and-coming small businesses about their experiences launching,
by Jinnie Lee
Fashion
5 Slip Skirt Trends We Keep Seeing On Instagram (& Where To Shop ...
by Eni Subair
Advertisement
Advertisement