Skip navigation!
Story from Fashion
Photo by Samir Hussein/Getty Images/The Business of Fashion
And so the Brexit saga continues. After Theresa May's historic loss last night, in which her deal for leaving the EU was rejected in the House of Commons by 432 votes to 202, Labour leader Jeremy Corbyn tabled a no-confidence motion in her government. MPs will be debating this topic today before a vote this evening, leaving none of us – even the MPs – any the wiser about Britain's place in Europe. The British Fashion Council (BFC), meanwhile, has publicly called for a second referendum in light of the latest parliamentary drama.
"As the British Fashion Council, we emphasise that a No Deal Brexit is a scenario that should be avoided at all costs," it said in a media statement released today. "The ongoing uncertainty and confusion that a no deal creates will have a negative impact on our industry, where investment is already impacted from the uncertainty being faced. A no deal situation will result in no transition period, and with an industry that is predominantly SMEs [small and medium-sized enterprises], we would struggle to cope with the trade realities that it would bring."
Advertisement
The BFC has made clear its support for remaining in the EU since the Brexit referendum back in June 2016. In the lead-up to the vote, it surveyed 500 designers and found that 90% wanted to remain, against 4.3% who wanted to leave and 2.4% who were undecided. London Fashion Week in September of that year backed Mayor Sadiq Khan's message that 'London is Open' and the BFC has continued to communicate with the government, the Creative Industries Council (CIC) and Creative Industries Federation (CIF) about the impact of Brexit on the industry.
According to the BFC, the fashion industry is worth £32 billion and provides more than 890,000 jobs across the UK – making it almost as key to the economy as the financial sector. London Fashion Week's schedule is always brimming with designers from diverse backgrounds, so it comes as no surprise that the industry is keen to keep Britain an open-minded and accepting country.
Vivienne Westwood and Katharine Hamnett, legendary designers and key voices in the industry, have created pieces that reflect their feelings on the vote, from Westwood's Brexit EU flag heels to Hamnett's 'Cancel Brexit' slogan tees. And it's not just British designers that have produced merch in support of Britain's place within the European Union – Vetements created a blue star-spangled hoodie last year, too.
"Considering the above and the industry’s preference to remain, based on all polls pre and post referendum, we are supporting the call for The People’s Vote as the preferred current option to minimise the impact to industry based on there being no valid deal on the table," the BFC continued. "We will continue to work with Government and designer businesses to navigate these difficult times and consider all options put forward."
Since last night's vote made the situation clearer for literally no one, we'll have to sit tight and see what steps the government makes next. In the meantime, here are some Brexit-themed pieces to shop because, hey, we should support the British economy while we can folks.
shop 5 products 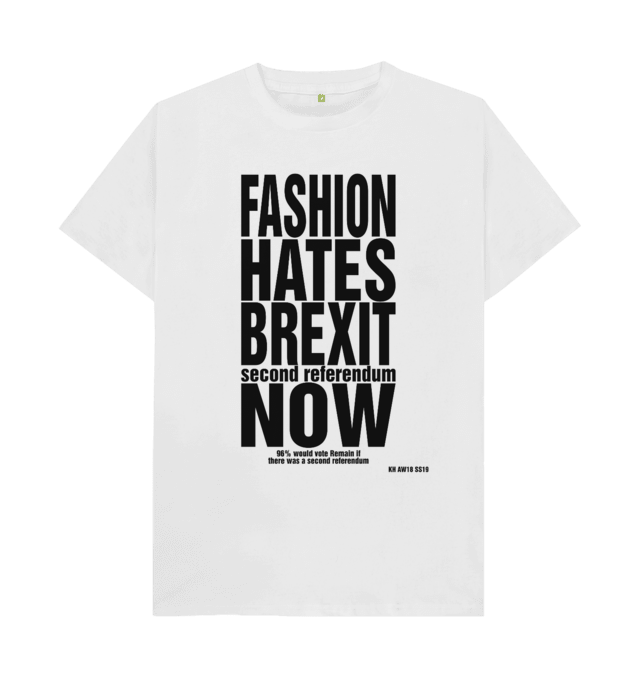 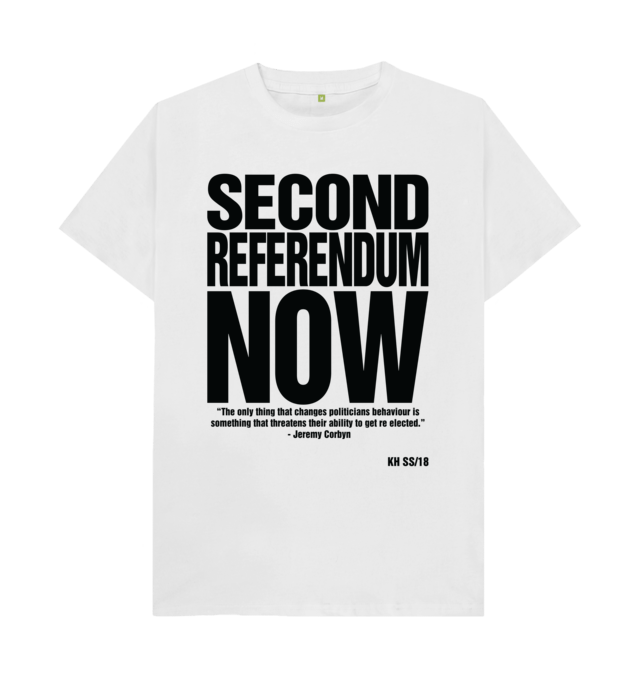 Katharine Hamnett
Second Referendum T-shirt (white)
£25.00
Katharine Hamnett
Designers
Alexander McQueen’s Latest Show Was Inspired By The Power O...
There was a lot of talk about mushrooms ahead of the Alexander McQueen Autumn/Winter ‘22 fashion show. As soon as teasers began to quite literally sprout
by Irina Grechko
Adidas
Gucci’s Latest Collection Includes A Collab With Adidas
After months of rumours, Gucci confirmed that it’s partnering with Adidas with the release of the brand’s autumn 2022 collection during Milan Fashion W
by Frances Solá-Sant...
Style
11 Indie Fashion Labels Emma Chamberlain Has Us Obsessed With
Internet sweetheart Emma Chamberlain has Gen Zs wrapped around her finger. Her relatable YouTube videos detailing what she does in a day garner millions of
by Maggie Zhou
Advertisement
Designers
Y2K Fashion Defined 2021 — 10 Brands That Led The Charge
by Shelby Ying Hyde
Designers
Virgil Abloh Is A Reminder That Fashion’s Most Prolific Designers...
Barrier-breaking designer. Genre-bending artist. Visionary. These are some of the ways people have described Virgil Abloh after it was announced that the 4
by Irina Grechko
Unbothered
Anifa Mvuemba Took Over D.C. With Hanifa’s First Runway Show & Sh...
Designer Anifa Mvuemba is known for her beloved brand, Hanifa, which is full of vibrant and bold coloured designs. On Tuesday (Nov 16), she debuted her fir
by Venesa Coger
Designers
Bottega Veneta Green Was Fashion’s Favourite Colour. What H...
It was the colour of the year — at least, it was for fashion types. Few cared about Pantone’s grey and yellow when there was “Bottega Veneta green”
by Katy Kelleher
Style
Gucci Writes A Love Letter To Hollywood With A Little Help From S...
When it was revealed that Gucci would be closing down L.A.’s Hollywood Boulevard for its Spring 2022 show — the brand’s first in-person show in almos
by Irina Grechko
Style
How The World’s First ‘Hijab Hat’ Is Redefining Modest Fash...
As a hijab-wearing Muslim woman living in Melbourne, Seher Istar is accustomed to frequent stares from passersby. But now, she’s getting looks for a
by Maggie Zhou
Fashion
Look Back At American Apparel’s Disco Dress: The Original Going-O...
Let me set the scene for you: The year is 2014. It’s the middle of Barack Obama’s presidency, and everyone is discussing “The Oscar Selfie” and Pha
by Addis Fouche-Channer
Fashion Week
Chromat Debuts Swimwear For Girls Who Don’t Tuck At Jacob Riis, N...
“Chromat has been massively inclusive for over a decade now, and once again, has found a way to include another community in fashion.”
by Eliza Huber
Designers
Sergio Hudson Is Bringing His Inauguration-Day Glamour To NYFW
Growing up in South Carolina in the 1990s, Sergio Hudson paid close attention to the news — and, in particular, what people wore while making news happen
by Frances Solá-Sant...
Advertisement
Advertisement