Skip navigation!
Story from Style
It’s winter of 2019, and you’re looking at the photos from the autumn '19 Valentino menswear show. Out of the corner of your eye, you spot them: Birkenstocks. You blink, look again, but your eyes aren’t failing you. Mixed in with Edgar Allen Poe-themed knitwear and whimsy outerwear, are two Birkenstock sandals. Now, more than a year, and one successful collaboration following the runway show, later, and the two brands came together yet again for a second release.
On Thursday, Birkenstock released three new Valentino x Birkenstock sandals, each of which is emblazoned with the Italian label’s signature “VLTN” logo and comes in a camouflage pattern, in green, vibrant yellow, and grey. Like their predecessors, these new styles were designed in the unisex Arizona silhouette — a favourite among both outdoorsy types and fashion’s finest around the world — and feature a black, leather-covered footbed and tonal buckles.
Advertisement
Photo: Michael Ullrich and Markus Ebner.
Photo: Michael Ullrich and Markus Ebner.
According to a press release, the second Valentino x Birkenstock collection was seen as a “natural continuity” of the styles previously introduced, which, while identical in shape, were more understated in terms of style than this new release. (The first collection included two styles, one in fire-engine red, and the other in black with the “VLTN” logo.) Of the first collection, Piccioli told Hypebeast that he chose to collaborate with Birkenstock for the same reason that people choose to wear the brand’s sandals and clogs every day.
“No matter what you wear, who you are, no matter your gender or social background, no matter your age, your style, no matter if you care about fashion or if you do not, Birkenstock has its own universal language. I loved the idea of approaching the DNA of our maison, represented by the individual and intimate world of couture with something that is so free and adaptable. To me, this is the definition of inclusivity,” he said at the time.
And given that we’ve all opted for comfort since the pandemic started, we can’t think of a better time for the duo’s second go. Shop all three VLTN styles — each of which costs $510 (£384) — on 1774.com, Valentino.com, and in Valentino stores now.
At Refinery29, we’re here to help you navigate this overwhelming world of stuff. All of our market picks are independently selected and curated by the editorial team. If you buy something we link to on our site, Refinery29 may earn commission. 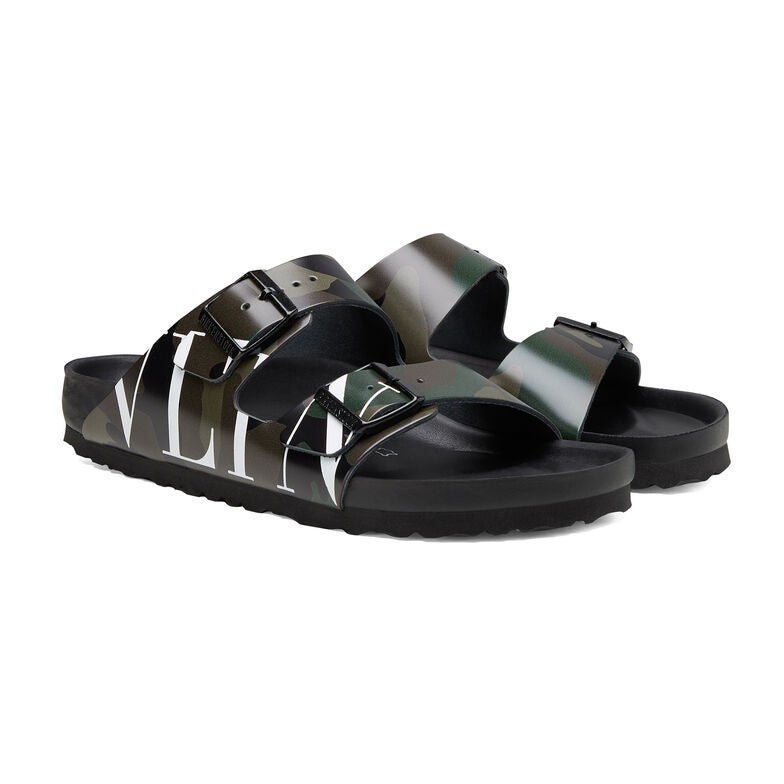 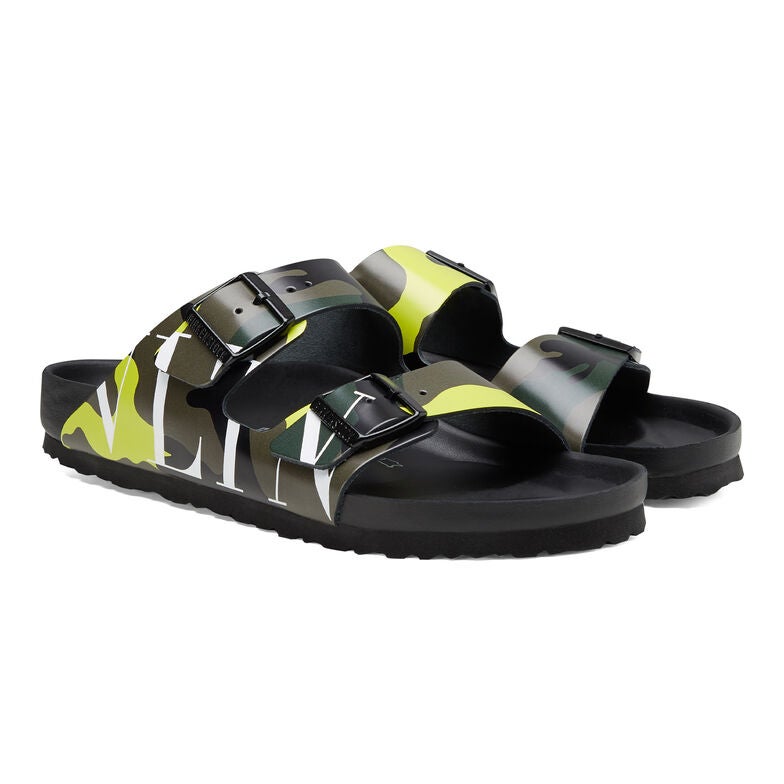 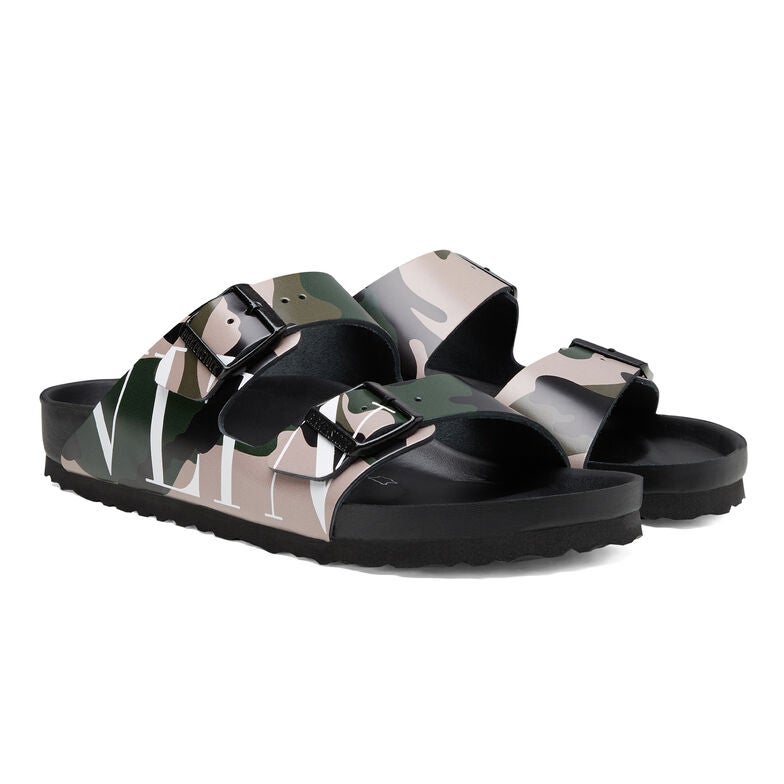 Valentino Garavani x Birkenstock
Arizona Valentino Garavani
$510.00
Birkenstock
Designers
The Christopher John Rogers Fashion Show Was Worth The Two-Year Wait
Even before the Christopher John Rogers show began, the unabashedly optimistic styles by the Louisiana-born, New York-based designer were on full display.
by Irina Grechko
Designers
Alexander McQueen’s Latest Show Was Inspired By The Power O...
There was a lot of talk about mushrooms ahead of the Alexander McQueen Autumn/Winter ‘22 fashion show. As soon as teasers began to quite literally sprout
by Irina Grechko
Adidas
Gucci’s Latest Collection Includes A Collab With Adidas
After months of rumours, Gucci confirmed that it’s partnering with Adidas with the release of the brand’s autumn 2022 collection during Milan Fashion W
by Frances Solá-Sant...
Advertisement
Style
11 Indie Fashion Labels Emma Chamberlain Has Us Obsessed With
Internet sweetheart Emma Chamberlain has Gen Zs wrapped around her finger. Her relatable YouTube videos detailing what she does in a day garner millions of
by Maggie Zhou
Designers
Y2K Fashion Defined 2021 — 10 Brands That Led The Charge
by Shelby Ying Hyde
Designers
Virgil Abloh Is A Reminder That Fashion’s Most Prolific Designers...
Barrier-breaking designer. Genre-bending artist. Visionary. These are some of the ways people have described Virgil Abloh after it was announced that the 4
by Irina Grechko
Unbothered
Anifa Mvuemba Took Over D.C. With Hanifa’s First Runway Show & Sh...
Designer Anifa Mvuemba is known for her beloved brand, Hanifa, which is full of vibrant and bold coloured designs. On Tuesday (Nov 16), she debuted her fir
by Venesa Coger
Designers
Bottega Veneta Green Was Fashion’s Favourite Colour. What H...
It was the colour of the year — at least, it was for fashion types. Few cared about Pantone’s grey and yellow when there was “Bottega Veneta green”
by Katy Kelleher
Style
Gucci Writes A Love Letter To Hollywood With A Little Help From S...
When it was revealed that Gucci would be closing down L.A.’s Hollywood Boulevard for its Spring 2022 show — the brand’s first in-person show in almos
by Irina Grechko
Style
How The World’s First ‘Hijab Hat’ Is Redefining Modest Fash...
As a hijab-wearing Muslim woman living in Melbourne, Seher Istar is accustomed to frequent stares from passersby. But now, she’s getting looks for a
by Maggie Zhou
Fashion
Look Back At American Apparel’s Disco Dress: The Original Going-O...
Let me set the scene for you: The year is 2014. It’s the middle of Barack Obama’s presidency, and everyone is discussing “The Oscar Selfie” and Pha
by Addis Fouche-Channer
Fashion Week
Chromat Debuts Swimwear For Girls Who Don’t Tuck At Jacob Riis, N...
“Chromat has been massively inclusive for over a decade now, and once again, has found a way to include another community in fashion.”
by Eliza Huber
Advertisement
Advertisement