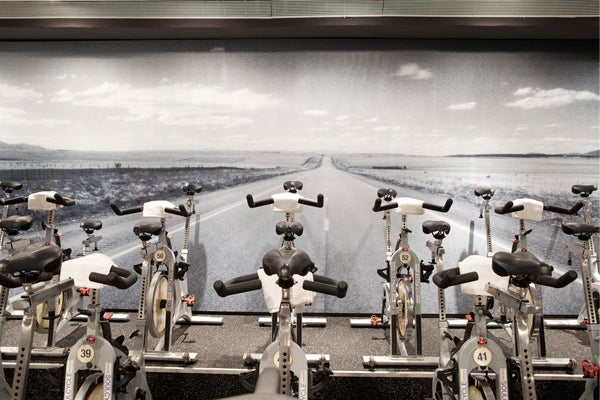 Could being devoted to exercise make it harder for you to break an addiction? Researchers think so. A new study at the Beckman Institute for Advanced Science and Technology at the University of Illinois in Urbana-Champaign injected mice with a chemical that tracks newly created brain cells and then divided them into two groups — sedentary and those that used running wheels. After thirty days, the mice were introduced to cocaine. All mice liked the drugs, but the researchers discovered that once exposing the sedentary mice to running wheels, it was easier for the rodents to kick their cocaine habit. In fact, they soon preferred running to the drugs. However, the active mice were not as lucky: they never lost their taste for cocaine.
Why? Researchers believe that exercise strongly affects learning. The mice that had been running from the start of the study had twice as many brain cells as the sedentary mice – and in this case, those brain cells had been used to form a cocaine addiction. “Fundamentally, the results are encouraging,” says Justin S. Rhodes, a professor of psychology at the University of Illinois and an author of the study. “Exercise improves associative learning.” The mice that started exercising after being introduced to cocaine learned to kick their habit with their new cells. This may be because of multiple studies that have suggested that exercise stimulates reward centers in the brain that can fill in for drug cravings. “It’s a no-brainer,” says Dr. Rhodes. “Exercise is good for you in almost every way.” (NYTimes)

Workout Clothes
Your Head-To-Toe Checklist Of What To Wear Running
by Karina Hoshikawa
Most Wanted
The Perfect Lululemon Matching Sets For Every Occasion
by Karina Hoshikawa
Fitness
These Vibrating Massage Tools Feel Just As Good As A Massage
by Cory Stieg
Advertisement
Most Wanted
Runners: Outdoor Voices Launched A Collection For YOU
by Karina Hoshikawa
Fitness
8 Sustainable Running Shoes For Some Eco-Friendly Exercise
by Karina Hoshikawa
Sustainability
Real People Share Their Favorite Reusable Water Bottle Brands
by Angela Tafoya
The Environment
Eco-Conscious Workout Gear That Actually Performs
by Emily Ruane
Workout Clothes
Outdoor Voices’ New Athena Dress Is Cool, Layerable, And Ready Fo...
If there’s one item in my closet that got a lot of use last summer, it’s the Outdoor Voices Exercise Dress. The breezy, lightweight garment is as comfy
by Karina Hoshikawa
Fitness
9 Female-Founded Fitness Brands Treating Every Day Like Internati...
by Alexandra Polk
Workout Clothes
The Best Workout Clothes & Sneakers Flexing On Amazon
by Kate Spencer
Dedicated Feature
The Founders Of LatinxHikers Want To Change Your Definition of “O...
For months now, Adriana Garcia and Luz Lituma have been collaborating across time zones, state lines, and hundreds of miles to maintain LatinxHikers — th
by Roxanne Fequiere
Dedicated Feature
Outdoor Adventure Sports Aren’t Inclusive Enough — Here’s How One...
As an acclaimed skydiver, an active hiker, and a military veteran, Danielle Williams is nothing short of fearless when it comes to facing the great outdoor
by Roxanne Fequiere
Advertisement
Advertisement
Discover
R29 Stories & News
Watch
R29 Original Series & Films
Shop
R29's Most Wanted