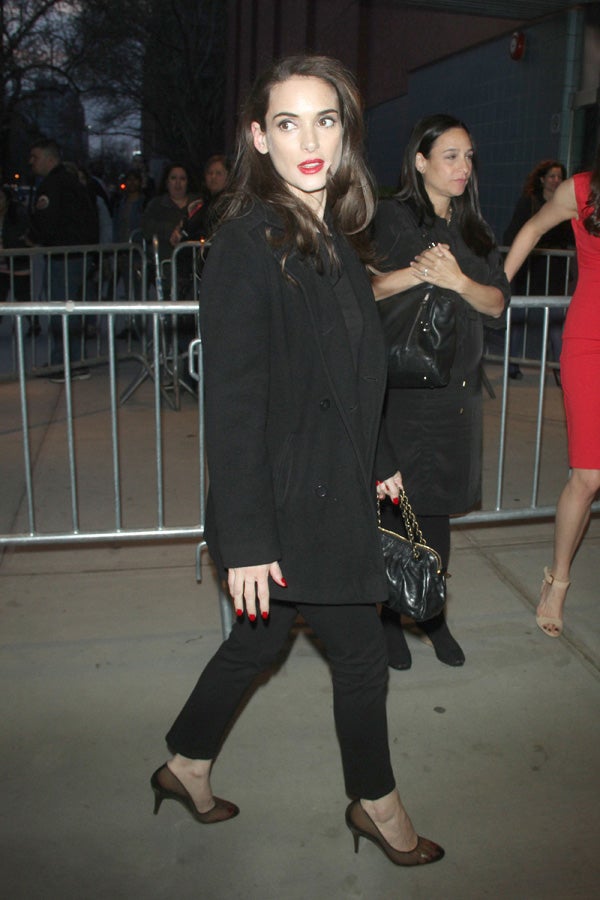 We've been waiting with bated breath to see Marc Jacobs make his acting debut (alongside Alexander Skarsgård, no less!) in the new flick
Disconnect
for some time now, but at last night's NYC premiere a totally unexpected starlet stole the show. Winona Ryder took to the screening looking completely fabulous, showing off a chic black-on-black look and some of the sultriest red lips around. Of course, it's not that we're surprised the Disconnect actress can look good, but she has, let's say, fallen off our radar a bit. And, there's nothing we love more than a fabulous celeb resurgence — and a red lip never hurts, either. Tell us: What do you think of Winona's city slicker look?

Unbothered
Can Fashion Be Healing? Content Creator Simi Muhumuza Says Absolu...
In a sea of social media sameness, it’s incredibly refreshing to scroll through content creator and model Simi Muhumuza’s Instagram and Tik Tok pages,
by Christa Eduafo
Unbothered
Let’s Ignore Kanye West & Put Some Respect On Gabriella Karefa-Jo...
Regardless of how much of a “creative genius” Kanye West believes himself to be, one thing is crystal clear: we really need to stop making excuses for
by Venesa Coger
Unbothered
Claire Sulmers On What’s Next For Fashion Bomb Daily
Welcome to Fashionably Black!, a style and culture guide for Black people highlighting the cultural moments, pioneers, and conversations we’ve always bee
by Venesa Coger
Advertisement
Unbothered
What’s Next for Serena Williams? Fashion, Of Course
When Serena Williams announced her retirement (or as Williams prefers, her “evolution”) from tennis earlier this month, it signified the end of an epic
by Alexis Jackson
Unbothered
Savage X Fenty Debuts Loungewear Collection — With Help From G...
Last week, Savage X Fenty launched its newest loungewear collection, Xssentials, and the line is everything you’ll need this fall. From soft fabrics to b
by Venesa Coger
Fashion
Remi Bader’s New Revolve Launch Is Here — Why The TikTok St...
At one point or another, all shoppers experienced trying on clothing they purchased online only for it to fit nothing like they expected. TikTok star Remi
by Daisy Maldonado
Unbothered
WNBA Star Skylar Diggins-Smith’s Puma Collection Is Versatile On ...
Skylar Diggins-Smith wants you to know that she’s a hooper with style. On August 2, the six-time all-star and Phoenix Mercury Guard released her first-ev
by Venesa Coger
Unbothered
Want To Grow Your Following On Instagram? Micaéla Verrelien Share...
The misconception about being a successful influencer is that you have to tie yourself down to one specific niche in order to gain popularity. But thatR
by Venesa Coger
Fashion
Tinx Is In Her “Rich Mom Athleisure” Fashion Era — But Don’t Expe...
“Rich Moms love a monochrome moment, like a linen pant and a nice linen blouse. They love a bathing suit with a sarong over it and some amazing statement
by Irina Grechko
Unbothered
Olivia Joan Went Viral Highlighting Her Grandmother’s Fabulous Wa...
When it comes to sharing fashion content across multiple social media platforms, clothing hauls are a crowd favorite. Usually, it’s a person talking abou
by Venesa Coger
Unbothered
Rihanna Tells Us Why The IRL Savage X Fenty Experience “Wil...
When news broke that Rihanna had plans to open physical Savage X Fenty stores, many wondered what the shopping experience would be like. Its e-commerce sit
by Venesa Coger
Somos Latinx
In Celebration of Tatyana Ali’s ‘90s Fashion Looks
When The Fresh Prince of Bel-Air hit television screens on September 10, 1990, young viewers weren’t just howling with laughter at the smart humor of the
by Naydeline Mejia
Advertisement
Advertisement
Discover
R29 Stories & News
Watch
R29 Original Series & Films
Shop
R29's Most Wanted