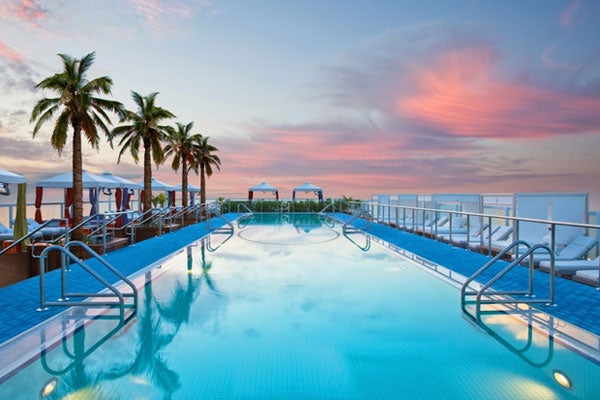 While we must admit to craving a poolside piña colada every so often (Bethenny, can you make us a Skinny already?), nothing quenches your dehydration on a hot day like some good old H20, especially if it’s imported from paradise. This Sunday, June 24, FIJI water, along with reality star and fashion mogul Whitney Port, will launch their first ever national pool series, titled Summer Soak 2012. Join Whitney on the Rooftop Pool at the Perry South Beach for some complimentary FIJI snow cones (water-flavored snow cones? Is that a thing?), poolside lounging, and the chance to have your summer style posted on the event’s Instagram stream (tagged #discoversummer, FYI). Though the only open bar offerings are the designated driver-friendly bottles of water, at least you will be perfectly hydrated while you gulp down some liquid courage to go tell Whitney how pretty she is. Who could ask for more?
When: Sunday, June 24 from noon to 5 p.m.
Where: The Rooftop at The Perry South Beach, 2377 Collins Avenue; 305-604-1000.

Advertisement
Movies
Claire Danes Remembers The Moment She Knew She Didn’t Want ...
Claire Danes and Leonardo DiCaprio making flirty eyes at one another across a fish tank in Baz Luhrmann’s Romeo + Juliet will forever be known as one of
by Kaitlin Reilly
Pop Culture
Lena Dunham Apparently Got Engaged After Jack Antonoff Split
Once upon a time (in Hollywood), Lena Dunham and Jack Antonoff were so in love they inspired a Taylor Swift song. The couple is no longer together, having
by Kaitlin Reilly
TV Shows
Everything Coming To Netflix February 2020
by Kathryn Lindsay
Movies
Carey Mulligan Asked The Question We’re All Wondering About These...
It can feel frustrating to watch brilliant films by women get get snubbed at award shows year after year without any explanation, but Carey Mulligan thinks
by Kathryn Lindsay
Pop Culture
What Made Judy Garland’s Life So Tragic
Judy Garland should have been a wealthy woman at the end of her life. After all, Garland starred in The Wizard of Oz, one of the most culturally important
by Elena Nicolaou
TV Shows
Where To Follow The Stars Of Netflix’s Cheer
by Kaitlin Reilly
Pop Culture
Irina Shayk Got Candid About Her Split From Bradley Cooper
When supermodel Irina Shayk started dating Bradley Cooper in mid-2015, their relationship took Hollywood by storm. Both stars were at the peak of their car
by Ineye Komonibo
Books & Art
11 Books To Stay Inside With This Winter
by Kathleen Newman-B...
Pop Culture
The Internet Is Torn Over This Video Of Dua Lipa & Lizzo At A Str...
Sunday’s 62nd Annual Grammy Awards were marked by high and low moments. Though the mood of the star-studded event was notably muted — the tragic death
by Ineye Komonibo
Movies
Lonely Island’s New Hulu Movie Is A Wedding Weekend Nightmare
Palm Springs just made history by becoming the most expensive acquisition at the Sundance Film Festival, according to Entertainment Weekly. The Andy Samber
by Kaitlin Reilly
Music
Wife Guy Justin Bieber Announces New Album & It Sounds Like It...
In case you hadn’t heard, Justin Bieber loves his wife. Hailey Bieber was seemingly the inspiration behind the singer’s first new single, ̶
by Kathryn Lindsay
Entertainment
From Taylor Swift To Drake, Celebs Mourn Kobe Bryant’s Sudden Death
On Sunday, former NBA player Kobe Bryant and his 13-year-old daughter Gianna died in a helicopter crash in Calabasas, CA. The two were headed to a travel b
by Lydia Wang
Discover
R29 Stories & News
Watch
R29 Original Series & Films
Shop
R29's Most Wanted