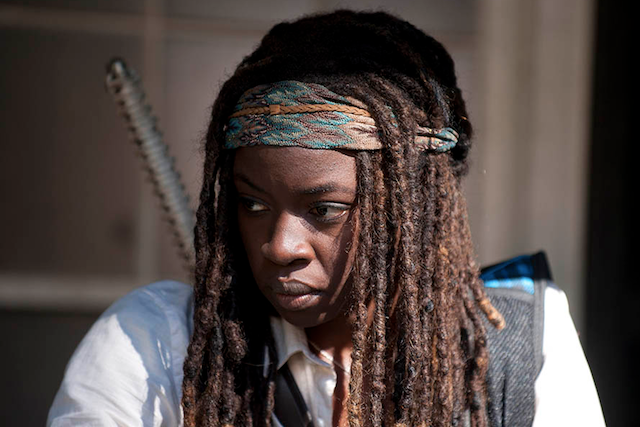 Photo by Gene Page/AMC.
"I'm Sergent Abraham Ford." What is one to think of a giant ginger who pulls rank after the presumptive dissolution of the military and is named after not one but two U.S. presidents (and a presidential assassin)? This guy enjoys killing walkers and, therefore, Walker World. If he's the Governor 2.0, then he represents a change in The Walking Dead universe. This isn't just a guy surviving in the apocalypse; he's found his bliss. Naturally, it's people like him — and psychopathic school kids like Lizzy — who will inherit this crappy, new earth. We can expect more of them as our characters continue to spread out into the world.
Advertisement
More importantly, the rise of these apocalypse lovers means that our group (and the Governor) represent an old guard — people who want recreate the world as it was. Who knows what the next-gen survivors will bring us. We mean, they seem perfectly happy to kill each other for dibs on the most comfortable bed in the house. Interesting.
Again, Carl is becoming a man, which apparently involves being tired (boy howdy) and not enjoying Michonne's Crazy Cheese™ antics. She, meanwhile, continues to open up her past and her heart, something represented by her new, crisp white shirt. Both suit her. Their little-brother-big-sister friendship is also a nice development, given that they're both mourning the loss of babies — though it does leave at least one unanswered question. Is a hallway a room? Very philosophical. 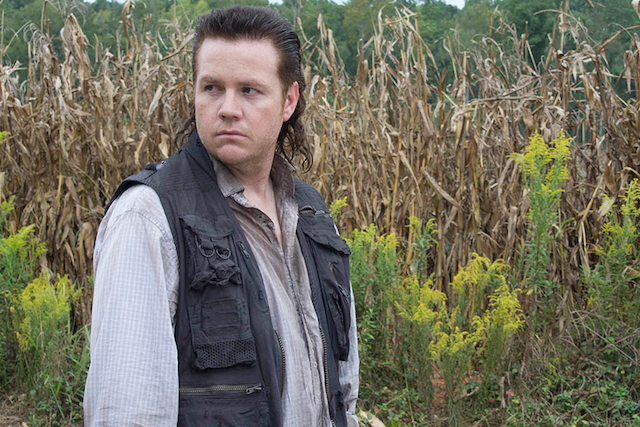 Photo by Gene Page/AMC.
Glenn and Tara, meanwhile, are traveling ever farther from the group thanks to the Sarge, Rosita, and Dr. Mullet. These army hotshots say they're on a mission to "fix the whole damn world," which is odd because they seem like the only people we've run across in The Walking Dead who, as we said, seem quite suited to the way things are. Right now, we don't believe a word of it. First, real soldiers don't wear hot pants. Second, real professors who can save the world don't have mullets (even though he seems to shoot like a real professor).
Glenn certainly doesn't believe them. Based on his assessment, he thinks there's a better chance he'd find Maggie than these guys would save the world. Then again, they could be good guys, which would make Glenn a horribly selfish person. Our theory, Sarge has been seduced into believing in the cause by the evil Dr. Mullet, who's not a scientist but just a guy in cargo shorts. Never trust a guy in cargo shorts.
Oh, and, yes, we're loving Tara more by the minute. In a less enlightened time, men would call her a "firecracker." Let's call her a grenade instead. We're wondering if her combined neediness and strength is going to blow back on Glenn.
Finally, there's something interesting about the way Rick's been progressing after his beat down by the Gov. The man who was once the big decider (apologies to George W. Bush) is now all wishy-washy, content to wait for a decision to come to him, and, quite literally, hides under the bed when danger comes a'calling. Sure, he doesn't hesitate to kill that guy on the toilet (who was apparently relieving himself with the seat down and his pants up, thank you basic cable). Now that his team is headed to the mysterious Terminus, maybe it's time he find his purpose again before he runs into more next-gen threats.
Gift Guides
May The 4th Be With You — & These 10 New Star Wars Collections
by Ray Lowe
Unbothered
Danai Gurira Reveals Black Panther: Wakanda Forever Is “...
Aside from its now-confirmed November 2022 release date, details about the highly-anticipated sequel to Marvel’s Black Panther have been kept largely und
by Kathleen Newman-B...
Unbothered
We Rewatched A Classic Black Rom-Com With Romance Queen Jasmine G...
Welcome to Love Like This?, a romance column where we, Kathleen Newman-Bremang and Ineye Komonibo, revisit some of the most romantic — or not, in hindsig
by Kathleen Newman-B...
Advertisement
Entertainment
11 Bollywood Movies You Need To Watch If You’re A Newbie
There are great films and then there are Bollywood films. The Indian movie industry is a titan in cinema that’s long and often been overlooked by Western
by Katherine Singh
Movies
In Everything Everywhere All At Once, Michelle Yeoh Find...
There’s a moment, fairly early into A24’s genre-bending film Everything Everywhere All At Once, when you realize just how meta the Michelle Yeoh-st
by Katherine Singh
Entertainment
Bend It Like Beckham Isn’t Perfect, But Jess Bhamra Is Sti...
Growing up playing little league and rep soccer, I consistently looked up to one soccer star. It wasn’t David Beckham, or Mia Hamm, or even Ronaldinho. M
by Katherine Singh
Entertainment
Moonshot’s Lana Condor Wants You To Choose Yourself
Spoilers ahead. In a time when billionaires and celebrities (*ahem* Pete Davidson) are obsessed with the future, blasting off into space and trying to forg
by Katherine Singh
Unbothered
Black-Owned KweliTV Is Bringing Authenticity & Access To Streaming
In the age of the streaming service, TV and film lovers are spoiled for choice. There are more than 200 different streamers currently available on the mark
by Ineye Komonibo
Movies
How I Finally Saw Myself In Turning Red, Pixar’s F...
Growing up, I got used to not seeing myself. In films, TV shows and music videos, the heroine – the girl all the guys wanted – always pivoted around th
by Maybelle Morgan
Unbothered
Jodie Turner-Smith Isn’t Done Talking About Colorism — Are You Re...
In the A24 film After Yang, Jodie Turner-Smith’s character Kyra rarely raises her voice. She’s all muted tones and measured timbre — even when she’
by Kathleen Newman-B...
Unbothered
Madea Is Forever — And There’s Nothing We Can Do About It
After 20 years of donning her signature silvery wig and bodysuit for various films and plays, filmmaker Tyler Perry put the famous character Madea “Madea
by Ineye Komonibo
Unbothered
Actually, Poetic Justice Isn’t All That Romantic — B...
Welcome to Love Like This?, a romance column where we, Kathleen Newman-Bremang and Ineye Komonibo, revisit some of the most romantic — or not, in hindsig
by Kathleen Newman-B...
Advertisement
Advertisement
Discover
R29 Stories & News
Watch
R29 Original Series & Films
Shop
R29's Most Wanted