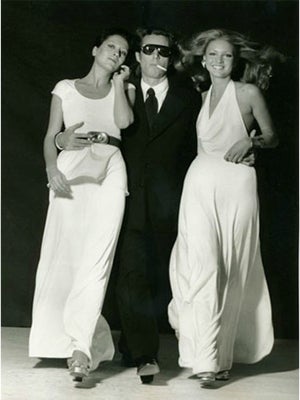 Last year's Bill Cunningham New York captured jaded Big Apple girls and boys and showed 'em that rich, sensitive world of fashion beyond the glitz. That's why we're so excited to learn of a new stylish documentary coming to Miami via Wynwood's O Cinema.
UltraSuede: In Search of Halston
premieres next Thursday, February 16. The film chronicles iconic America fashion designer Halston and his glamorous life and successful career, which still influences womenswear today. During his heyday, Halston worked and partied with some of the most influential women in the world—Jackie O, Bianca Jagger, Elizabeth Taylor, and Ali MacGraw, to name a few. The doc includes interviews with Halston's friends, confidantes, and fellow designers, including Liza Minnelli, Diane Von Furstenberg, Vogue's André Leon Talley, Anjelica Huston, Cathy Horyn from the New York Times, and Billy Joel. Watch the ultra-cool preview below!

Photo: Via Ultrasuede
Unbothered
19 Black Horror Flicks To Binge After You’ve Finished Lovecra...
by Laurise McMillian
Entertainment
Something About The Bachelorette Timeline Isn’t Addi...
The teaser for the upcoming fourth episode of The Bachelorette just made it official — Tayshia Adams will definitely be replacing Clare “So What Wa
by Ineye Komonibo
Movies
In A Horror Movie About Hair, The Biggest Villain Goes Unseen
Since the early origins of the genre in the late 1800s, horror films have mostly been told through a very white lens. If people of color, particularly Blac
by Ineye Komonibo
Pop Culture
Khloé Kardashian Defends Kim Kardshian’s Elaborate Pandemic Birth...
When regular people feel like they want to “pretend things were normal just for a brief moment in time,” that probably means going for a nice long walk
by Natalie Morin
Reality TV
The Masked Singer Mushroom Has To Be One Of These 3 Singers
We could watch history repeat itself on The Masked Singer season 4. Last season, Night Angel was introduced in Group C and quickly became the one to watch.
by Ariana Brockington
Pop Culture
Your Internet Boyfriends & Girlfriends Really, Really Want You To...
We are mere days (or perhaps months, depending on the speed of mail-in ballots) away from the most important presidential election of our time, and the sta
by Ineye Komonibo
Halloween
24 Halloween Movie Quotes That Perfectly Capture The Strangeness ...
by Shannon Carlin
Movies
At The End Of The World, It’s Only Us & George Clooney’s Sn...
Netflix’s upcoming sci-fi drama “The Midnight Sky” imagines a future post-apocalyptic Earth on which George Clooney is one of the only survivors (hon
by Natalie Morin
Pop Culture
There’s A New Update On The Meghan Markle Tabloid Lawsuit
Last October, Meghan Markle and Prince Harry announced that they would be seeking damages from British tabloid Mail on Sunday for “spreading relentle
by Ineye Komonibo
Best of Netflix
Holidate Is Bad, But Emma Roberts Is Good
Emma Roberts has rom-coms in her blood. Her aunt, after all, is Julia Roberts, she of Pretty Woman, Notting Hill, While You Were Sleeping, My Best Friend?
by Anne Cohen
Pop Culture
Catherine Oxenberg Calls NXIVM’s “Ugly Little Dumpling” Cult Lead...
The sentencing of Keith Raniere — the co-founder and “Vanguard” of the infamous NXIVM sex cult— to 120 years in prison is a huge win for his countl
by Natalie Morin
Entertainment
There’s Another “Vanderpump Rules” Baby On The Way
If we’re ever getting another season of Vanderpump Rules, it’s going to be all about babies. This quarantine has been a very busy one for the r
by Ineye Komonibo
Discover
R29 Stories & News
Watch
R29 Original Series & Films
Shop
R29's Most Wanted