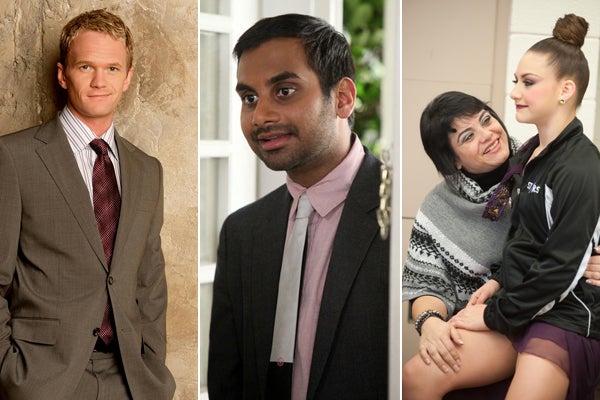 Hump: Barney Stinson (Neil Patrick Harris) on How I Met Your Mother. No, we haven’t actually discovered how Ted met the mother yet. What we have learned is how legen — wait for it — dary his bro Barney is. He may be a raging womanizer (although his new relationship with Becki Newton’s Quinn may make a monogamist of him yet), but no one can deny how epic Barney’s ideas are.
On this week’s episode, he coerced Ted into starting a mariachi band at their favorite bar, eating everything on the menu, bringing a horse into the bar, and considering bungee jumping off the Statue of Liberty. Best of all, these whimsically random and amusing activities were meant to distract Barney from his very real feelings for his GF. Aww; Barney has a heart underneath his ubiquitous suit after all. Game on.
Advertisement

Marry: Tom Haverford....’s apartment. While Tom (Aziz Ansari on Parks and Recreation) isn’t much of a catch, personality-wise, his apartment is basically every person’s dream. Here are some of the amenities you’ll find in Tom’s Pawnee paradise:
— A ridiculously soft blanket draped on every possible sitting location
— A whole shelf of coconut water in the fridge
— A constantly refreshed cheese plate with Adriatic figs
— Boutique eye cream
— Unisex cologne
— Lip exfoliator
— Chocolate-covered almonds
— A Sudoku book
— A steady temperature of 80 degrees, night and day
— DJ Roomba
Ann Perkins (Rashida Jones) herself warns, “he’s deeply in debt,” but I can’t hear her over the ever-present plate of cheese and artisanal figs. I will help Tom support his luxury lifestyle as long as he promises to love, obey, honor, and pick the best stuff from Sky Mall and Hammacher Schlemmer for me.

Kill: The producers, moms, and basically every other adult involved with Dance Moms: Miami. Every week, at the beginning of the show, the dance teachers at Stars Dance Academy slowly reveal “the list,” which ranks the seven to thirteen-year-old dancers based on their performances at last week’s competition, attitudes during rehearsals, overall behavior, and how their mothers behaved during the week. This week, the teachers told the kids that they were mediocre last week. They actually looked into children’s faces and called them mediocre. As if that wasn’t bad enough, we were then shown clips of the girls (and boy, Lucas) dancing in last week’s competition — with the most minute of flaws magnified. They weren’t even flaws, just close-up shots from cameramen who know nothing about dance.
Advertisement
In a later segment, the girls and boy are forced to reveal their deepest insecurities on national television. One of them actually sobbed. I felt like I was witnessing the future therapy sessions she will most definitely need, once she escapes this horrible show. But all of this insecurity torture was just a prelude to the weekly group dance, a contemporary routine which was actually themed "insecurities." Hey, Dance Moms producers and dance teachers, The Glee Project already did this exact same thing. You're just trying way too hard.
While the kids learned the routine, the titular dance moms went through a weekly routine of their own. They started a whole to-do about one mom doing something mean to the newest mom in the group...honestly, it was like watching a horribly written version of Mean Girls 3: Momsense.
One mother ACTUALLY said this about a 12-year-old girl: “I’m not impressed with Sammi...I don’t understand why she is such a big deal.” Sammi is TWELVE. Might I remind this mother what a tenuous age that is? I don’t think most people of any age could hear that a statement like that about themselves and not fall into a funk. Luckily, Sammi is a ridiculously good dancer for her age and has the self-confidence to back it up. Still, that mother should be ashamed of herself.
Really, all of the moms should be ashamed of themselves. I highly recommend taking a step (or 309848243 steps) back and letting your daughters and son save the high drama for their emotional contemporary numbers.

Dedicated Feature
Single Drunk Female — A Must-See Comedy About Sobriety —...
Margarita Mondays. Wine Wednesdays. Happy hours. “Book club.” In a world in which drinking culture is the norm, with holidays (St. Patrick’s Day, New
by Andrea Cheng
Unbothered
In Defense Of Ari Lennox’s Trip to Ghana: The Power and Pro...
Grammy-nominated musician Ari Lennox recently performed at Ghana’s Afrochella music festival and shared her experience in the West African nation on Twit
by Qali Id
Somos Latinx
How Afrobeats Is Musically Bridging Black Latinxs and Africans
The first time I heard Colombian pop singer Maluma’s “Mama Tetema,” featuring Tanzanian singer-songwriter Rayvanny, I was writing a script for VEVO?
by Marjua Estevez
Advertisement
Unbothered
Netflix Has A Hit On Its Hands With The New Cast Of Too Hot To...
Spoilers for Netflix’s Too Hot to Handle ahead. Too Hot to Handle came to us at the beginning of the coronavirus pandemic. It was gloriously-timed conten
by Ineye Komonibo
Unbothered
And Just Like That… Sex and the City Still Doesn’t D...
Sex and the City is such a pop-culture juggernaut that many Black women can make some reference to it, whether it be a love of the Cosmopolitan, a salute t
by Niki McGloster
Unbothered
Still Missing Insecure? These New Black Shows Will Make It...
by Ineye Komonibo
Unbothered
It’s Time For Black TikTok Creators To Be Paid Their Worth
Forbes recently named TikTok’s top-earning creators, including Charlie and Dixie D’Amelio and Addison Rae.
by Venesa Coger
Dedicated Feature
How Sita Abellan Is Rethinking The Word “Influencer” For Hispanic...
Sita Abellan epitomizes “Jack of all trades.” Throughout the course of the last decade, she’s worked as a model, a designer, an Instagram Personality
by R29 Editors
Unbothered
Station Eleven Can Be A Devastating Watch, But Danielle ...
Welcome to “What’s Good,” a column where we break down what’s soothing, distracting, or just plain good in the streaming world with a “rooting fo
by Kathleen Newman-B...
Book-ish
Books By Black Authors We Can’t Wait To Read In 2022
by Stephanie Long
Unbothered
Quinta Brunson Gets A Gold Star For Abbott Elementary
There are some television shows that, within only a few minutes of watching, you just know will be hits. That magic is hard to explain — there isn’t ex
by Ineye Komonibo
Somos Latinx
Glee’s Santana Lopez Elevated Queer Latina Represe...
Mean cheerleaders have long been staples of teen entertainment. In Glee, it was the self-proclaimed “straight-up bitch” Santana Lopez, played by th
by Gabriela Ramos Ta...
Advertisement
Advertisement
Discover
R29 Stories & News
Watch
R29 Original Series & Films
Shop
R29's Most Wanted