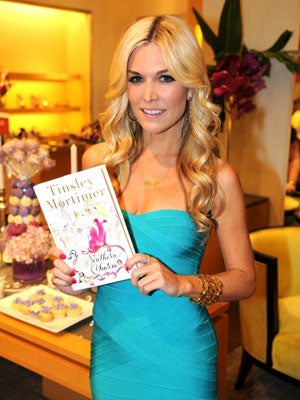 Socialite and Southern bombshell Tinsley Mortimer is a major fan of Miami and seems to be always popping into town. So, it wasn't surprising that she stopped by Neiman Marcus in Merrick Park to promote her novel, Southern Charm. Yes, the petite beauty is now a newbie novelist on a 14-city book tour. (She can’t believe it herself, either.) Mortimer, who looked radiant in a turquoise bodycon dress with her blonde locks teased into beachy waves and a freshly tattooed wrist (more on that later), talked to fans and autographed books (which happens to be dedicated to her three Chihuahuas). The book-signing seemed more like one big, ultra-femme party fittingly set in the department store’s shoe salon. There was a DJ, HPNOTIQ Harmonie cocktails and bubbly, candy, and plenty of cupcakes. The drinks were all named after characters in her book, which meant we all got a little taste of Southern Charm.
Advertisement

Why did you decide to write a book?
"I was originally going to write a style guide about girly girl dressing, because that’s how I like to dress — with color and frills and ruffles. But my publisher and agent told me told me to write a novel. They said, 'You are from the South, you’re a fish out of water, and you know New York City so well. It’s such a perfect backdrop for a fictional story.'"

Was it challenging to write?
"At first, I thought it was scary and overwhelming, but to write fiction is freedom. You can create these characters and make them do and say what you want. It’s a lot more fun than telling people what to wear!"

We know the book is fiction, but did you use any real-life experiences?
"It’s inspired by a lot of people I know in New York City. They are composites of certain people; I'm a lot of the main character, Minty Davenport, but I’m also another character, Tabitha. My 'mom' in the book, Scarlett, is very much my mom. My real mom is this crazy southern woman who is awesome, but also very annoying and meddling."

How long did it take you to write?
"It took two years. I wrote most of it at home in my bedroom. I had help writing the book with a friend, and I had a great editor." 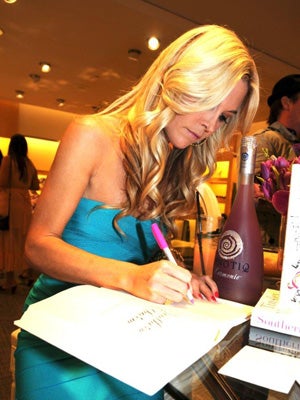 What else are you doing these days?
"I design handbags and clothing. I’ve been doing it for six years for a company in Japan called Samantha Thavasa. I also do a lot of work with the American Humane Society. It’s a big importance to me. I actually just tattooed my dog's name, Bella, on my wrist. She just passed away, on the second day my book came out, from heart failure. So, this book tour has been a great distraction."

Is Southern Charm for all women?
"It’s a nice fish-out-of-water tale. It’s about staying true to yourself, and I also think it's a fun beach read. You don’t need a dictionary reading my book."

Tell us, why did you decide to have your book tour at Neiman Marcus?
"Fashion is an important part of the book, so to be at Neiman Marcus is the perfect place, especially in the shoe department. I love shoes."

What do you like about Miami?
"I love Miami. If I wasn’t living in New York, I’d move here. I love the energy, the warm weather, and I love coming here on the weekends."

Future plans for the book?
"It’s any author’s dream for it to turn into a movie or a television series. And I think Southern Charm can expand to the big screen because it’s a story that hasn’t be told."

Photographed by Manny Hernandez
Movies
Tyler Perry Makes A Pivot With A Jazzman’s Blues — But Doe...
This story contains spoilers for Netflix film A Jazzman’s Blues. Just months after resurrecting Madea for a film that no one asked for (Madea as Beyoncé
by Ineye Komonibo
Unbothered
The Problem With How We’re Talking About The Nia Long & Ime Udoka...
For as long as I can remember, Nia Long has been the woman of everyone’s dreams. She’s played some of the most adored characters in Black cinema, and h
by Tayo Bero
Movies
Don’t Worry Darling Can’t Overcome The Rumors
Spoilers ahead. In the world of Don’t Worry Darling’s Victory, a sun-cloaked desert planned community, 1950s-era gender roles are alive and things aren
by Katherine Singh
Advertisement
Unbothered
Sanaa Lathan Is A Director Now & On The Come Up Is Her T...
Welcome to “What’s Good,” a column where we break down what’s soothing, distracting, or just plain good in the streaming world with a “rooting fo
by Kathleen Newman-B...
Disney
How To Score A Disney+ Subscription (Even If It’s Just For ...
I say “Disney” you say “land,” or “world,” or perhaps now during the height of at-home streaming, you chime “plus
by Alexandra Polk
Unbothered
John Boyega Says He Only Dates Black Women — What’s The Issue?
British-Nigerian actor John Boyega is the latest subject of online discourse this week, and surprisingly, it’s not because of his stellar (and thirst-ind
by Ineye Komonibo
Dedicated Feature
This New Horror Film Will Give You A Fear Of… Smiles
When it comes to horror movies, there isn’t a whole lot that we haven’t seen: mask-wearing killers, extraterrestrial life, monsters that take on every
by Andrea Cheng
Unbothered
Bravo’s Real Girlfriends in Paris — Like Emily In Paris...
When Emily in Paris premiered on Netflix in 2020, audiences excitedly tapped into plucky protagonist Emily Cooper’s (Lily Collins) quarter-life crisis as
by Ineye Komonibo
Somos Latinx
Jessie Reyez Finds Healing On YESSIE — & You Will, Too
Ten seconds into Jessie Reyez’s debut album, “Before Love Came to Kill Us,” she sings, “I should’ve fucked your friends. / It would’ve been the
by Brenda Barrientos
Movies
Do Revenge Wants You To Embrace Your ‘Glennergy’
Spoilers ahead. When Drea Torres (Camila Mendes) and Eleanor Levetan (Maya Hawke) first pair up in Netflix’s Do Revenge, they’re raging. They’ve
by Katherine Singh
Mi Casa Es
Oye Mi Canto: The Nostalgic Music That Cures Our Homesickness
Music is a powerful catalyst in evoking memories of a time and place that’s far away. In the 2017 Oscar-winning animated fantasy “Coco,” it’s the s
by Marjua Estevez
TV Shows
Tell Me Lies Episode 4 Sex Scene Shows Why We Need Enthu...
Tell Me Lies might seem like a young woman’s sexual fantasy of a college relationship. After all, the first time Lucy (Grace Van Patten) and Stephen (Jac
by Olivia Truffaut-Wong
Advertisement
Advertisement
Discover
R29 Stories & News
Watch
R29 Original Series & Films
Shop
R29's Most Wanted