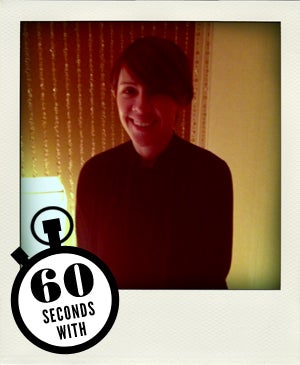 It's been more than three years since sisterly pop-rock duo Tegan and Sara released its last album Sainthood, and in the meantime the band has had lots of time to write new songs, tour the world, and think about the new direction its music is headed. Tuesday will see the release of Heartthrob, its brand-new record, which Sara tells us was approached with a completely blank slate. "We asked ourselves what the future should be like. We almost approached it as if we were a new band," she says of the album. This included roping in Grammy Award-winning producer Greg Kurstin, who has previously worked with megastars like Pink and Lilly Allen. We caught up with Sara in a surprisingly plush little room at Warner Bros. Records to talk about the new LP, her burgeoning "older lady look," and how identical twins can have very different styles.
Advertisement

Tell us about the new record. It's been awhile since your last one — what's changed since Sainthood?
"Well, it was actually quite a long time — it's been three years now. I liked that Sainthood and The Con were sort of like companion albums. The Con was all about the demos and layering and it was really dense. It was a really dark album for us, and it was hard to translate live, [whereas] Sainthood became about performance, about getting into the studio as a band, setting up, and playing the songs. With Heartthrob we really wanted to start from scratch. We [decided that we] shouldn't be afraid to go in new directions, even if they're lateral, if they are creative and exciting."

Was there a big difference in how you approached writing the songs together?
"The songwriting process didn't change a tremendous amount, but when it came time to start looking at producers there were real deliberate choices made in terms of fidelity and the experience people would have. The producer who ended up doing most of the record, Greg Kurstin, had a résumé that looked very different from the one that would have appealed to us when we were making The Con, for example. You know Kylie Minogue, Pink, all these pop-girl singers. But I loved his energy, and that he wanted to make bold pop music that would appeal to the audience we already have and introduce us to a whole new audience."

The first single "Closer" seemed like a really personal song. Is there a specific story behind writing it?
"'Closer' is a song that Tegan wrote. When I first heard it, it was the song as it is now without the current chorus. I loved it because I thought it was an entirely different voice than Tegan had used before. We tend to write about rejection or relationships that are ending. You know, there's a little bit of heartbreak in everything. I thought that this is so great, because it's about the beginning of a relationship; it's much more flirtatious. There's an intimacy to it, but it's not a downer — which is I guess what I'm trying to say [laughs]. When we got into the studio, we generally won't write together on things like that, but because we needed a really top-notch chorus, it was this funny situation where we argued — not argued in a negative way — but we debated the point of the chorus. What is the choruses intention? Do we now use the chorus to say, 'We're getting it on, I'm really into you,' or 'You deny me, you reject me, it's not going to happen'? Tegan really wanted to stay in this nebulous, dreamy, beginning of a relationship where things haven't gone to hell and there's no complications."

How does your style compare with Tegan's? What are some differences in the way you approach fashion?
"You know, we've kind of converged, in terms of the brands that we like and the designers we feel more comfortable in. There was a time during the last couple of records where I felt Tegan was more L.A. punk rock. She was getting crazy tattoos all the time. She'd buy a cool shirt and tear the sleeves off. Wear lots of hats. Definitely what I'd associate with a California-casual, almost punk-skate influence. I was living in Montreal and spending time in New York and I was trying to refine what I like to call my 'older lady look.' It took me a long time to figure out what I was comfortable in and what styles worked for me. I discovered clothes that were meant for ladies who were trying to dress in more tailored fits. I could still dress in an oversized shirt and skinny pants, but [a fitted] cut allowed me to look like I hadn't just crawled out of a Goodwill bin or whatever. I was able to look like I had made an effort. When I was on tour, I used to look for hipster shops, and now I just shop at where old ladies dress. I love the way that the shirts are cut."

Would you guys ever share clothes?
"It's funny, Tegan and I have both come back closer to the middle. I see her wearing stuff where I'm like 'I would totally wear that.' And she has dressed a little bit more 'adult' as well. I think that just comes with having a more disposable income. When you're limited to used jeans and T-shirts, you just do what you can with it."

Where do you like to shop, either at home or on the road?
"When I'm in New York City, there are overwhelming options, but when I'm in a bind and need something new, I'll go to Barneys, A.P.C, or Opening Ceremony. I can usually find something that makes sense in one of those stores. But I'm not joking about that if I'm in Kansas City or wherever I'll go to Nordstrom — to the ladies section — and start looking through the button-ups. It's just a style of cut that makes sense to me."

What makes you feel comfortable to wear when you're playing a show?
"Any discomfort of insecurity is just magnified when you walk out in front of people. If there's any hesitation or doubt, I'll just change. I usually have two outfits that I'm rotating that are tried and true. There's nothing worse than walking out on stage and playing a whole show thinking 'Oh fuck, I hate this shirt. Or these shoes are totally wrong. Or I'm not being me.' Usually it's one more casual look and one that feels a little bit more dressed-up. Right now for my casual look, it's just tights, an oversized T-shirt, and a leather jacket. But we've been touring with The Killers, and they dress so snazzy every night and they look great, so I've been wearing a more tailored coat with wool pants so I look like I'm dressed up."

How does collaboration work when you live on separate coasts?
"You know, I moved away 10 years ago, so we've been on opposite coasts for a decade. I don't know if it's hard because it's just all we've known, really. With the Internet — being able to send files and transfer things — has become so commonplace. I mean, I don't just do it with Tegan; I do it with other people I'm collaborating and songwriting with. I don't find it challenging, but there's a little bit of flexibility needed. Obviously, if we're going to do rehearsals, I'll need to go out to L.A. or Tegan will need to come to the East Coast. But because we're not a traditional band where we jam every Friday at our rehearsal spot, I don't feel like it's been that hard."

Does that physical separation influence how the music turns out?
"It's kind of cool, actually. It's not just our style that is different, it's where we live. Tegan is out seeing a completely different kind of band and is part of a different scene. In our previous records, I could really hear that in terms of the punk rock and rock sounds. Whereas I was really influenced by the lo-fi electronic scene and living in Montreal with bands like Arcade Fire, Wolf Parade, Stars, Broken Social Scene, all that stuff that was coming out of Montreal and Toronto at the time."

What have you been inspired by lately?
"I'm sort of spazzing out on mainstream stuff right now. I could list all this obscure underground stuff that's super cool, but to tell you the truth, I'm listening to stuff that's a lot more high fidelity. I have the new Alicia Keys on pre-order and I can't wait to hear what that sounds like. I love the new Taylor Swift record. The big production over the past couple years, like The-Dream, that stuff is really exciting to me."

TV & Netflix
How Cast Of Selena: The Series Compares To The People Who ...
by Martha Sorren
TV Shows
These Queen’s Gambit-Inspired Gifts Are Basically ...
by Morgan Baila
Pop Culture
Would Taylor Swift Really Confirm She’s Engaged With An Eas...
If there’s one thing Taylor Alison Swift loves, it’s an easter egg. It seems the singer spends all her free time hiding secret messages or refe
by Natalie Morin
TV Shows
Issa Rae Is Teaming Up With Succession‘s Showrunner ...
What happens when “nice white parents” infiltrate lower income communities in search of better opportunities for their privileged kids? Gentrification,
by Ineye Komonibo
Best of Netflix
The Real Stories Behind Mank Are Stranger Than Fiction
Warning: spoilers ahead for Mank. The new Netflix film Mank centers on the making of Citizen Kane directed by and starring Orson Welles. Specifically, the
by Shannon Carlin
TV Shows
Harper’s Shocking Industry Finale Decision Isn’t Really ...
Major spoilers ahead for HBO’s Industry. The season 1 finale of HBO’s Industry ended on a toxic twist that shocked fans. In the eighth episode, whi
by Reana Johnson
Movies
All The Fairy Godmothers & Regular Humans In The Godmothered
by Ashley Chervinski
Best of Netflix
Big Mouth’s Voice Cast Got Even More Hilarious In Se...
by Shannon Carlin
Gift Guides
Celebrity-Approved Subscription Boxes To Gift Your Pop Culture-Ob...
by Lydia Wang
Entertainment
Selena: The Series Changes A Few Of The Details
Warning: There are spoilers for Selena: The Series ahead. While the Jennifer Lopez movie will never leave our hearts, Netflix’s Selena: The Series is
by Martha Sorren
Best of Netflix
All The Real Old Hollywood Figures In Netflix’s Mank
by Shannon Carlin
Music
New Music Fridays: New Month, Same Vibes
As if Fridays weren’t your favorite day already, Refinery29 will also be gathering the best new music out each week, and breaking down why each track des
by Ineye Komonibo
Discover
R29 Stories & News
Watch
R29 Original Series & Films
Shop
R29's Most Wanted