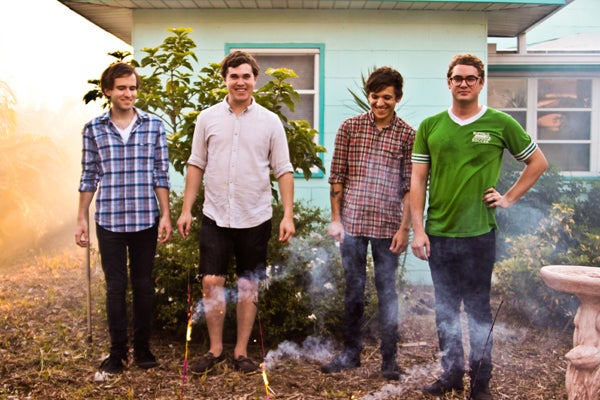 When bloggers and music critics say something about Miami's influence on the independent rock scene in the nation, they almost immediately all mention Surfer Blood. Sure, they are from West Palm Beach, but Dade County helped raise the four dudes, whose dedication to their region is clear in even their band name. But the surfer comparisons don't stop there: The reverb-heavy, beach-y band sounds like The Beach Boys mixed with a more lo-fi, '90s grunge, making dreamy rock-and-roll that can only come from the Sunshine State. The guys, who released their critically acclaimed debut EP "Tarot Classics" last year and just played on Jimmy Fallon, were quickly snapped up by Warner Brothers and are feverishly working on their next album. Comprised of singer J.P. Pitts, Thomas Fekete on guitar, bassist Kevin Williams, and Tyler Schwarz playing drums, the dudes are only two years into making some pretty serious, um, waves in the music scene (bah-dum!). Not only did they share some of their personal photos with us, but the guys talked their surf-rock take on Miami and the music that's made locally. They also defined "shredding" (yes, that's their motto), explained surviving WMC, and revealed how their undying love for surf-rock forbearers The Pixies brought them together.
Advertisement
Photo: Courtesy of Zachary A. Bennett/Surfer Blood 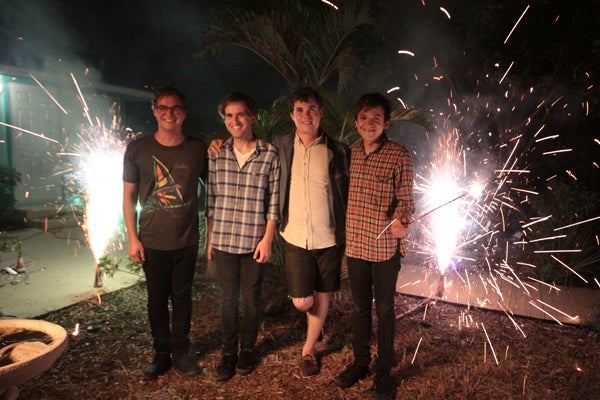 So, how and where did the four of you meet?

Thomas: "I was hanging out at the beach when Tyler asked me for a bottle opener. I handed him my keychain and he noticed my Pixies trinket. We immediately began to bond over music. Little did we know we were actually huge fans of each other's bands. That evening we to an Ultra Music after-party where I met JP. We we're all really stoked and had a great night of dancing/shredding. The following morning JP gave me his number and said, 'Dude, we should jam.' T.J. and J.P. had been shredding music together for years so I was the new guy, but it was clear as water that we were meant for each other."

What are some advantages being from a place not traditionally known for its burgeoning rock music scene? What were some things that held you back?

"Well, South Florida is a special place with a killer vibe. The people who do stick around here after school to pursue their art are very serious about what they do. I would say all of my favorite bands at the moment are Florida bands. We got used to playing shows to 5-25 people every night, so our first shows out of town with little to no people were still very special to us. I will run you through a day in sunny South Florida:
Wake up
Shred the beach
Band practice
Shred a bar
Go to sleep.

Advertisement
That's Surfer Blood for you!"

What were some of your favorite venues to catch shows in while growing up? Where do you like to play now?
"Some of our fondest memories took place at Churchill’s Pub in Miami. It's a really great spot with amazing vibes. Most shows are all-ages or 18-and-up so I started attending concerts there at a young age. Another spot was the Klein Dance studio in Lake Worth, Florida. That was our DIY venue that always held all-ages shows for under five dollars. R.I.P."

What do you suggest for people heading to Ultra/WMC for the first time? What wouldn't you miss?

"Well, New Order and Kraftwerk are playing, so definitely catch that. Show up with an open mind and a positive attitude and it will be a good time. Also, most importantly, 'Rip the dance floor.'" 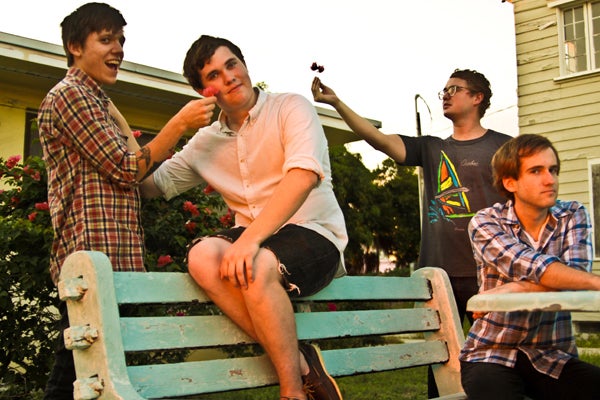 When you are on the road, what do you miss the most about the beach?

"Miss our vegan spots when we are in, say, Butte, Montana. (But Butte is beautiful too. You must give to receive.) We miss the shred (surf) but there are infinite ways to shred on tour. You can shred (hike) a mountain. Even when we are thousands of miles from home in a blizzard we feel the sun looking
down upon us."

Are you guys currently on tour? What are you working on? How do you bring a little bit of sun with you when you go?

"We're home right now, working on a record. It's much different. There are some really epic songs on this one. The lyrics are quite dark and emotional. Our previous album meditated on a 'Florida' or 'tropic' motif, if you will. We are working on getting the same vibe across on this record, but it will be different
thematically."

TV Recaps
R29 Recaps: Every Episode Of Netflix’s Jupiter’s L...
What if your overbearing parents were superheroes? That’s the question the new Netflix series Jupiter’s Legacy decided to ask. It’s based on a gr
by Leah Marilla Thomas
TV Shows
Aidy Bryant Knew Exactly What She Was Doing With The End Of Sh...
Spoilers are ahead. In the final scene of Shrill, Portland writer Annie (Aidy Bryant) and her BFF Fran (Lolly Adefope) sit on a park bench, sipping directl
by Jean Bentley
Pop Culture
Laverne Cox Is Here To Save The E! Red Carpet
Laverne Cox is booked and busy, and her latest gig will take her behind the scenes of the biggest industry events as the new host of E!’s popular red
by Ineye Komonibo
Advertisement
Pop Culture
Send Help: Ben Affleck & Jennifer Lopez Just Went On Vacation Tog...
When newly single Jennifer Lopez and Ben Affleck were spotted hanging out together in early May, sources insisted that relationship between the famous exes
by Natalie Morin
Best of Netflix
Everyone Is At Home Watching These 10 Shows & Movies On Netflix R...
by Ineye Komonibo
Pop Culture
Seth Rogen Won’t Be Working With James Franco In The Forese...
For years, Seth Rogen and James Franco have had a strong personal and professional relationship, leading them to work on various films together over time.
by Ineye Komonibo
Pop Culture
Ryan Reynolds’ Mother’s Day Tribute to Blake Lively Is Not What Y...
Ryan Reynolds and Blake Lively have that special kind of love — the kind in which you express your affection by posting unflattering photos of each other
by Natalie Morin
TV Recaps
Mare Of Easttown Episode 4 Recap: Finally, A Break In The ...
It’s been a year since Katie Bailey disappeared and in that time, Mare (Kate Winslet) has been unable to come up with any leads. But in episode 4 of
by Shannon Carlin
TV Shows
Jupiter’s Legacy Forgot To Explain Who Dr. Richard I...
Spoilers are ahead. Most of the plot of Netflix’s Jupiter’s Legacy focuses on five of the six original heroes and how they got their powers —
by Martha Sorren
Playlists
33 New, Classic, & Deeply Underrated Songs For Your Mother’...
by Lydia Wang
TV Shows
Lily James Is Biting Sebastian Stan’s Nipple In The First P...
A few minutes ago I was debating the merits of going to the IRL bar in New Girl for outdoor happy hour with my best friend (She can’t! She’s busy!). Th
by Ariana Romero
Music
Shrill‘s Season 3 Soundtrack Makes It A Little Harde...
by Shannon Carlin
Advertisement
Advertisement
Discover
R29 Stories & News
Watch
R29 Original Series & Films
Shop
R29's Most Wanted