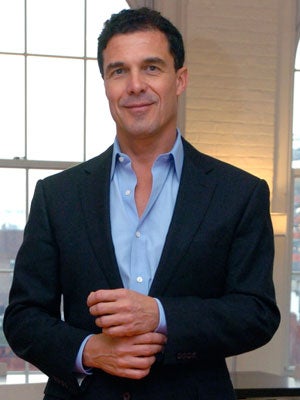 Oh, we love getting a.m. news from Standard hotelier André Balazs. Thank the hospitality powers-that-be that R29 HQ is directly across from The Standard, East Village — and, as the hashtag goes, #itgetsbetter.
Today, we received word that Balazs, the proprietor of the ever-changing hotel (literally, the construction progresses as we speak) has hired John Fraser to helm the yet unnamed restaurant, which is slated to open in early fall '13. Interior details of the eatery remain under wraps (save that it will boast indoor and outdoor garden dining and a street front café), but from what we know about Fraser, the food should be damn good.
Advertisement
Hailed as one of America's rising culinary faces, Fraser's been a darling of the press as chef and owner of the UWS' Dovetail — Frank Bruni, for instance, gave it a three-star review in The New York Times (oh, and did we mention its own Michelin star?). Which makes sense, if you've ever tried Fraser's venison loin, served with butternut squash, swiss chard, bacon, and green peppercorns.
Balazs and Fraser will collaborate on the menu, which is being described as "innovative and vegetable driven." Fresh ingredients will be sourced from Balazs’ farm in upstate New York, The Locusts on Hudson. Come September, we know where we'll be going to lunch...and dinner...and mid-afternoon snacks.

Food News
Customers Are Boycotting Goya Foods After The Company’s CEO...
Goya, a popular food brand known as the premier source for authentic Latinx food, has been trending on Twitter since yesterday — but not in a good way. A
by Elly Belle
TV Shows
Lisa Vanderpump’s Restaurant Villa Blanca Has Reportedly Cl...
The world of Vanderpump Rules has undergone a lot of changes in recent weeks, and now there is reportedly one more. According to Screen Rant, Lisa Vanderpu
by Olivia Harrison
Unbothered
These No-Fuss Recipes Will Help You Bring Summer Into Your Kitchen
Smoky barbecue and refreshing cocktails are two culinary hallmarks of the summer season. Chances are you’ve enjoyed both at a rooftop party or perhap
by Stephanie Long
Food & Drinks
Uber Is Launching A Grocery Delivery Service
Grocery delivery services are as old as grocery stores themselves. But our months-long stint of shelter-in-place order compliance changed how most of us pr
by Michelle Santiago...
Food & Drinks
Shop Your Next Bottle From These 10 Black-Owned Wine Companies
by Olivia Harrison
What To Buy Now
The Most Highly Rated Ice Cream Makers On Amazon
by Olivia Harrison
Boozetown
8 Boozy Popsicle Brands To Help You Beat The Summer Heat
by Olivia Harrison
Food & Drinks
The Canned Cocktail Trend Is Here To Stay — Here Are 13 To Try
by Olivia Harrison
Best Coffee
12 Black-Owned Coffee Brands To Shop Right Now
by Olivia Harrison
Best Ice Cream
Ben & Jerry’s Joins The #StopHateForProfit Campaign & Annou...
Yesterday, Ben & Jerry’s became the most recent brand to join the NAACP, Color of Change, and the Anti-Defamation League’s #StopHateForProf
by Olivia Harrison
Food & Drinks
Eskimo Pies Are Over As The Company Discontinues Racist Branding
It’s an unfortunate but urgent realization: you look at your pantry or scan the grocery store aisles and see a sea of Black faces, smiling even, on A
by Michelle Santiago...
Food News
How To Get Free Panera Coffee Through Labor Day
Any old-school financial advisor will blame the state of your personal finances on your coffee intake before realizing that the economy might be past the p
by Michelle Santiago...
Discover
R29 Stories & News
Watch
R29 Original Series & Films
Shop
R29's Most Wanted