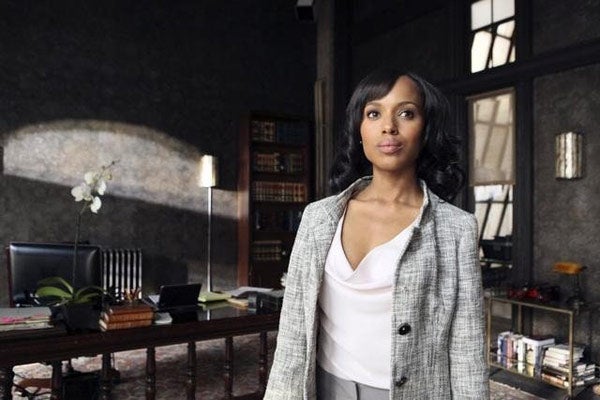 We gotta hand it to our fine city: Not only did we land a gig as the buzzy backdrop for Showtime's mega-hit Homeland, but now we're getting another TV show all about us. ABC's new drama Scandal premieres tonight, and it's loosely based on the career of Judy Smith, a former Bush administration press aide who became famous for keeping Washington's power players out of salacious headlines (and helping them rebuild their image, if trouble couldn't escape them). The show's female lead, Olivia Pope, is a PR savant who handles high-profile crisis-management cases — she's a master at spinning a story, seducing a mark, and any other kind of scheming it takes to make her clients look good again.
Advertisement
With Grey's Anatomy creator Shonda Rhimes at the helm, we can only imagine what obsession-worthy versions of McDreamy and McSteamy will be stirring the pot (or plot, we should say). A hottie State Department official who's spying for another country? A dashing CIA operative with a double life? A lobbyist with swagger and a problematic agenda? Or perhaps a handsome nerdy-type who works for the Library of Congress but has an, ahem, expensive habit or two? The scenarios could go on forever, so it seems that D.C. is pretty much the perfect place for some socio-political shenanigans. Plus, we have it on good authority that there is some serious chemistry between Olivia and the president (played by the very attractive Tony Goldwyn), which we're quite looking forward to. But you tell us: Will you be tuning in for the premiere of Scandal?
When: Tonight, April 5, at 10 p.m. on ABC.

News
It Isn’t Just The Government That’s Under Attack — It...
When thousands of violent extremists incited by President Donald Trump burst into the Capitol building yesterday, it instantly dominated news coverage. But
by Natalie Gontcharova
Work & Money
What $100 Will Get You In Each State
Folks, it might be time to consider relocating. The Bureau of Economic Analysis recently released a report measuring price disparities across different sta
by Jessica Chou
Washington DC
Your Guide To An Awesome Last-Minute Getaway Near D.C.
by Ayren Jackson-Can...
Advertisement
Entertainment News
Rihanna Rings In The United States Of Amerihca
by Hayden Manders
Entertainment News
Girl Hopes For Beyoncé, Gets Obama Instead
You can't always get what you want. But, if you try sometimes, you just might find — wait, we got off track. You can't always get what you
by Hayden Manders
Washington DC
How The Nerd Prom Has Become The Coolest Ticket In Town
On one special night of the year, the men and women in D.C. trade in their pocket protectors and ID lanyards for pocket squares and custom gowns to attend
by Laura Schwartz
Washington DC
8 Things To Know This AM — Apr 30 2014
In D.C., the White House has issued a list of recommendations to colleges about how they should handle and prevent sexual assault on campus. (The Washingto
by Hayden Manders
Washington DC
Glitz, Glamour, & Spring Arrive In D.C. With Our Hollywood-Inspir...
by Ashley Mateo
Washington DC
This News Presenter Shares Her On-Set Routine
How do you like to start your day? What news show do you like to kick it off with? We don’t play favorites. Instead we feature anchors we love, one being
by The New Potato
Washington DC
Party (& Shop) Like A Star In D.C. With R29 & CUSP
Photographed by Jesse Webster. Fashion, like Hollywood, is constantly evolving. As fast as labels and designers can churn out new styles, there are up-and-
by Ashley Mateo
Home
6 Up-And-Coming Artists To Start Collecting Now
by Kristin Guiter
Books & Art
R29 Book Club: Put A Bird On It
Photo: Courtesy of Little, Brown and Company. Thanks for joining us for this month's final book club discussion, where we're hashing over the las
by Holly E. Thomas
Advertisement
Advertisement
Discover
R29 Stories & News
Watch
R29 Original Series & Films
Shop
R29's Most Wanted