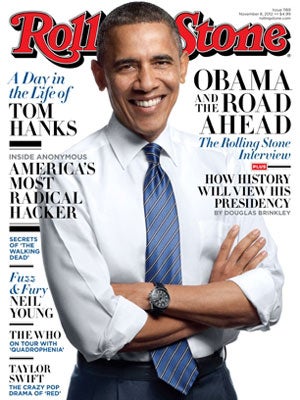 The next issue of Rolling Stone is set to hit stands on November 8, two days after the presidential election. By then, surely a winner will be declared, and the man smiling, looking confident on the cover will either feel wildly triumphant or completely deflated. Which might be the reason why the magazine released its in-depth interview with the current president now, when his honest conversation with historian Douglas Brinkley still has campaign relevance.
The music magazine has always had deeply political roots, dedicating dozens of pages per issue for the political drama du jour, like the scathing McChrystal interview that caused a media frenzy. Also, readers will notice an unapologetic, unmasked liberal bent. Even as voices from the left, RS hasn't always been kind to Obama, taking him to task in interviews over his drug policies and gay marriage. But in the most recent interview, RS allows Obama to reiterate his talking points: Look at the economy, change isn't easy, we saved ourselves from financial collapse, and that the best way to fix America's economy is through the middle class.
Advertisement
What is refreshing, however, is that Obama gets to say these things to a (albeit historic) music-focused publication. He can loosen his tie. Choose his words. He can joke and laugh without 9 million eyes focused on him. And while the right has criticized Obama for taking time to chat with consumer magazines instead of more official channels, this is part of his charm. He is a people's president, flaws and all, who understands the middle class because that's what he knows.
If you watched the debates, most of what he says isn't new or groundbreaking, but a couple of moments really stand out. Here are the things that have been brought to light. 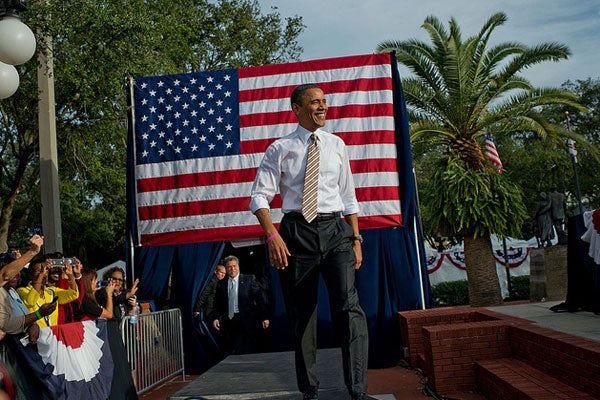 Rolling Stone believes it all began with Reagan.

From FDR to LBJ, every party has initiated social practices into their taxation and party initiatives. That is, until Reagan was elected and began to dismantle services like Medicare or rulings like Roe v. Wade. The article titles the slow loss of moderate Republicans and social liberals/fiscal conservatives as "The Grand Reversal."

"The offense-driven, Yes-We-Can candidate of 2008 has become the No-You-Won't defensive champion of 2012."
The reason that Obama has abandoned "hope," suggests RS, is because he is working hard to prevent fiscal greed and irresponsibility from taking root.

Brinkley shares a wonderful moment between two girls and Obama. One, 11 years old, asked him to sign a T-shirt, and he obliged. The second, a 14-year-old (Malia's age), was given a lesson. "'Oh, no,' the president said with a broad smile, crouching down to make eye contact. 'You're too old to have someone writing on your clothes. Do you understand? That's a nice shirt you have. Take care of it. I'll give you a fist-bump instead.'" The point is, Obama can differentiate between the two girls and relate to them, without lumping kids into one broad category.

Speaking of which, kids think Mitt Romney is a "bullsh*tter."
Obama came into office smoking, playing basketball, and with a healthy use of adult language (maybe he got that last bit from Biden?). But the kids love him. He does very well in the six-to-12 demographic, Obama says. "Kids have good instincts. They look at the other guy and say, 'Well, that's a bullshitter, I can tell.'"

For Obama, first-debate Romney did well, but his "top-down" ideas didn't hold water.

"In the first debate, he made as good a presentation as he could on what is a fundamentally flawed economic theory."

Because of his continued usage of his favorite term, his legacy may be that of a "Fair Shake."
Says 'Bam: "I'd be comfortable with that, and hearing it from a historian, it sounds pretty good to me."

Paul Ryan's obsession with Ayn Rand has a lot to do with his adolescent feelings of being misunderstood.

"Ayn Rand is one of those things that a lot of us, when we were 17 or 18 and feeling misunderstood, we'd pick up. Then, as we get older, we realize that a world in which we're only thinking about ourselves and not thinking about anybody else, in which we're considering the entire project of developing ourselves as more important than our relationships to other people and making sure that everybody else has opportunity — that that's a pretty narrow vision. It's not one that, I think, describes what's best in America."

Obama turns to Clinton regularly for advice.
"I'm talking to him regularly, and he's given me good advice. Not only is he a great politician, but he's also somebody who has a lot of credibility with the public when it comes to how the economy works."

He stayed mum on his Halloween plans, but when asked what he thought Romney should be, he had some ideas.

"Next Halloween I hope he'll be an ex-presidential candidate."

Read the entire interview over at Rolling Stone.

Photo: Via Barack Obama's Flickr/Scout Tufankjian for Obama for America