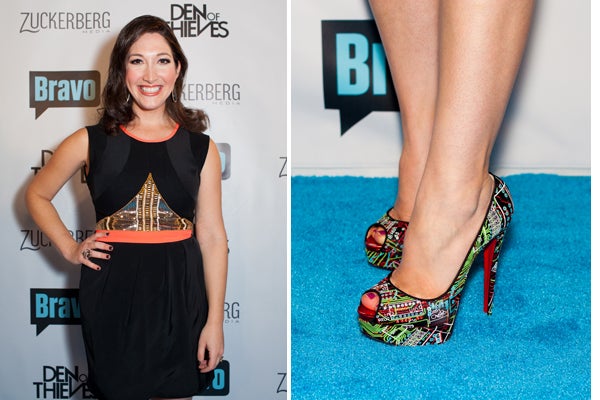 What do you do when your brother is king of the Internet? Well, if you're Randi Zuckerberg, you bring in a camera crew to record all those who attempt to follow in his footsteps. Yup, Mark’s sister is the producer of Bravo’s new reality show
Start-Ups: Silicon Valley,
which made its on-air debut last night — much to the dismay of many naysaying techies. Of course, we caught up with the Valley expert, who walked the blue carpet in these super tech-y Louboutin steppers, at the show’s premiere party. Read on to find out what she thinks of the the show's haterade-drinking critics, her reality-show addictions, and if the tech industry is really as nerdy as it seems.

What reality shoes are you addicted to?

“I love a lot of the shows on Bravo! I’m really excited that we’re premiering right after Real Housewives of Beverly Hills, I think that’s one of the best shows on the network. I watched Pregnant In Heels a lot when I was pregnant with my son.”

Who is your favorite reality show character?

“I’m a big Bethenny Frankel fan! I think she is a great example of a self-made woman, who used the platform that reality TV gave her to do something really big.”

What inspired you to make this show?

“It was such a team effort. I wish I could take full credit for the show, but Bravo came to me, they already had a really great concept. I was just brought in to help them finesse it and make it a little more Silicon Valley.”

What did your brother think when you told him about it?

“He thought it was really cool! One of his favorite things was going on SNL!"

Blogs are saying that the show isn’t a realistic portrayal of Silicon Valley. What would you say to that?

Do you think it will change the concept that people have of Silicon Valley?

“I hope so! I think Silicon Valley could use a little glamour. I think that in economic times like this, it is aspirational to be an entrepreneur, and hopefully we can bring that to more people.”

Do you think the tech-geek stereotype is true?

“I think there is a little truth to it, but I think most of America thinks that in order to come to Silicon Valley you need to be a guy who codes all the time. Hopefully, this will open their eyes to a lot more of the possibilities and jobs for women that exist out here.”