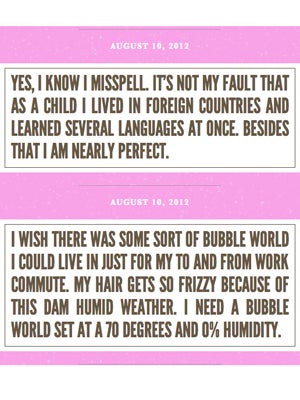 Last week, when we heard the same one-liners the same night at three different spots around the city — from three different girls, no less — we started feeling a little suspicious. Was there a Mean Girls sequel we didn't know about? Turns out, we were right to have our guard up — over a marathon Thursday g-chat session (you know the ones that start at 9:03 a.m. and end with a cocktail), we discovered the source of those pervasive quips.
Enter: Tumblr #PattiProblems, a new viral voice that's best described as Suri's Burn Book meets Rich Kids On Insta meets a Republican (but gay-friendly) Regina George in NYC. We winced at the stereotypes and generalizations (plus, the fashion taste is of the Elle Woods' variety), but we also love-to-hate Heathers. Though it's only been a few days since the site's officially launched, we've already been forwarded the link from enough randoms to figure it might just be a matter of time before our neighbor's cousin visiting from out-of-town will be quoting it. So, we tapped the anonymous author — on Twitter, naturally — for an exclusive interview and got to know the "troubles" (heavy, heavy air quotations) she's seen just a little better. Read on for the LOL answers (hint: which celeb she can't stand right now) and get hooked. Or, don't.
Advertisement
What are your top three #pattiproblems?

"• This humid weather. My hair does not cooperate at all and I really don’t enjoy coming into the office looking huge. Hence I now straighten my hair at my desk.
• Breaking in new shoes. Really, it’s rough to get shoes the way you want to. Us girls have to suffer so much just to be able to wear some new heels or flats. I think I spend more money per month on Band-Aids than booze or cabs and all I do is booze and cab it. Chanel flats are the only shoes I never have to suffer to break in.

• Summer hangovers. This week I ran out of ginger ale and it’s been a big problem. If I have had too many glasses of rose or martinis the night before I really need a ginger ale before I get my iced coffee with soy milk and two Splendas or I'll feel faint. No one wants to be around me when I feel ill."

What are the websites you troll most often?
"I love the NYT Style section. Bill Cunningham is my favorite! Who else could get away with riding a bike with a cute nerdy blue jacket taking photos? If any other old man did that they would probably think it was a Law and Order SVU episode waiting to happen.
CNN. Since I generally give myself 15 minutes to get ready in the morning there is no way I have time to look at the news. What I love about CNN is that they are so ridiculously biased it can make me giggle on a stressful day. You always have to stay informed, especially on an election year. Need to know what the other side is thinking.
Suri’s Burn Book! Witty and sassy I love it! Making celeb children cry day after day."

Who are your top celebrity inspirations?
"Suri Cruise. I mean, who does not love her. She’s a toddler and I want to be her. Kate Middleton. She’s so in shape and has the best hair in the world. She is almost so perfect that it’s a #pattiproblem. I would love to see a picture of her hungover — I bet she still looks fine. #bitch."

Which celebrities are annoying your right now?
"Blake Lively. Why is she buying a home in Bedford, does she have kids we didn’t know of? She says she eats cupcakes and does not work out which is just a lie."

Are you worried about isolating people if they can't relate to the harsh tone of the site?
"If you can’t relate to it, then don’t read it. It’s a big world out there — you don’t have to agree with everything and everyone. I would say to anyone that doesn’t like it that they clearly have no sense of humor and I am glad I don’t have to be friends with them."

Black Friday
We’re Diving Headfirst Into These Black Friday Streaming Deals
When prepping our Black Friday and Cyber Monday shopping wishlists, lots of must-have items come to mind each year: big-ticket home items, covetable fashio
by Amanda Randone
Unbothered
Bruised Isn’t Great, But Halle Berry And Sheila Atim Are
Welcome to “What’s Good,” a column where we break down what’s soothing, distracting, or just plain good in the streaming world with a “rooting fo
by Kathleen Newman-B...
Unbothered
William Jackson Harper In Love Life Is The Chaotic But End...
I just can’t stop thinking about the new season of HBO Max’s Love Life. More specifically, I can’t stop thinking about William Jackson Harper in the
by Ineye Komonibo
Advertisement
Somos Latinx
The Latinx Students of Bayside Want to Know Why Schools Don’...
Correction: An earlier version of this article referred to Castilian Spanish, which is the type of Spanish spoken among most Spanish-speakers around the wo
by Cristina Escobar
Unbothered
Black Selling Sunset Stans, It’s Our Time
When Netflix first dropped Selling Sunset, the world wasn’t sure of how interesting a series about the personal and professional lives of the agents of T
by Ineye Komonibo
Unbothered
King Richard May Be About Richard, But Its Strength Is Sho...
When Venus and Serena Williams first rocketed into the tennis stratosphere, no one could have imagined the indelible impact that the sister duo would have
by Ineye Komonibo
Unbothered
Two Men Convicted For The 1965 Assassination Of Malcolm X Have Be...
Nearly 60 years after the shocking assassination of civil rights leader Malcolm X, a new development in the investigation into his murder has led to t
by Ineye Komonibo
Entertainment
Sister, Sister: King Richard Stars Saniyya Sidney & Demi S...
Welcome to The Come-Up, where rising Gen-Z talent checks in on their way to the top. In this edition, we’re catching up with dynamic duo Saniyya Sidn
by Ineye Komonibo
Entertainment
You’ll Definitely Have The High Ground With These Out Of Th...
by Ray Lowe
Unbothered
The Banning Of George M. Johnson’s All Boys Aren’t Blue ...
George M. Johnson’s All Boys Aren’t Blue, a coming-of-age essay collection about growing up Black and queer in New Jersey, was reportedly removed from
by Stephanie Long
Unbothered
The Devastating — And Divisive — Ending Of Passing, Explained
This story contains major spoilers for the Netflix film Passing.  The ending of Rebecca Hall’s Passing is ambiguous and shifting, perhaps even more so t
by Nylah Burton
Entertainment
Jimmy O. Yang As A Lead Love Interest Is Everything I Needed As A...
Seconds into Love Hard’s trailer, I was audibly excited bopping along to the upbeat track and a glowing Nina Dobrev. Netflix Christmas movie season is up
by Maggie Zhou
Advertisement
Advertisement
Discover
R29 Stories & News
Watch
R29 Original Series & Films
Shop
R29's Most Wanted