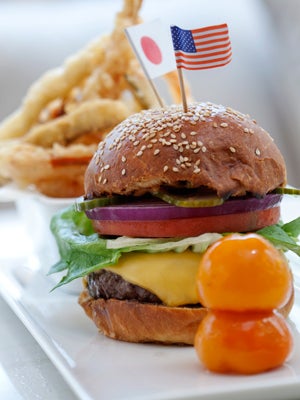 Eyeing that clock for lunch? We've got some tasty food porn to inspire you to get you psyched for your 1 p.m. meal. Since a good carnivore will never turn down a juicy burger, we’re always keeping an eye out for a dope double-fister to sink our (canine) teeth into. While we love Five Guys and Shake Shack, now we’re signing the praises of Makoto at Bal Harbour.
The Japanese restaurant serves up one of the best all-American burgers we’ve ever tried. Yup, you read that right: A Japanese restaurant in Miami can serve a kick-butt burger that is as tasty as it is unexpected — and perfect for a protein-packed meal. Made with deceptively patriotic Black Angus meat but partnered with some Eastern-inspired tempura-fried veggies on the side (ohh! We can pile them on top!), it’s enough satisfy anyone. Makoto’s all-American is even battling against some stiff competition at the Grind Burger Battle on March 31, which is a big deal in the ultra-competitive Miami foodie scene. Well, we’ll know who we’ll be rooting for.

Coronavirus
Almost A Third Of Renters Missed Payments This Month
It’s mid-July now, but a survey by rental website Apartment List found that 32% of renters and homeowners haven’t yet paid their rent or mortgage in fu
by Whizy Kim
TikTok
Is TikTok Really Going To Get Banned In The United States?
This story was originally published on July 10. Earlier this week, Secretary of State Mike Pompeo admitted on Fox News that he and the President are “
by Michelle Santiago...
Summer Guide
Before You Plan Your Summer Road Trip, Read This
Some flights are grounded, there are varying travel restrictions across the world, and after three months of mandatory staycation, cabin fever is at an all
by Courtney Shea
Work & Money
Can My Employer Fire Me For My Noisy Children?
For working parents, the coronavirus pandemic has presented a seemingly impossible challenge: continuing to do their jobs as normal while also having to ta
by Whizy Kim
iPhone
Why So Many Apps Are Crashing On iPhones Today
On Friday morning, thousands of iPhone users woke up to find that a lot of their go-to apps were crashing. The affected apps so far include Spotify, Pinter
by Michelle Santiago...
Coronavirus
The Best HEPA-Filter Air Purifiers To Buy For COVID-19
From handwashing to hand sanitizer, non-medical face masks, social distance, and self-quarantine, the precautionary measures we’ve taken against COVI
by Elizabeth Buxton
Food News
Customers Are Boycotting Goya Foods After The Company’s CEO...
Goya, a popular food brand known as the premier source for authentic Latinx food, has been trending on Twitter since yesterday — but not in a good way. A
by Elly Belle
TV Shows
Lisa Vanderpump’s Restaurant Villa Blanca Has Reportedly Cl...
The world of Vanderpump Rules has undergone a lot of changes in recent weeks, and now there is reportedly one more. According to Screen Rant, Lisa Vanderpu
by Olivia Harrison
Work & Money
Color Of Change’s Arisha Michelle Hatch On Professional Act...
In the wake of the May 25 police killing of George Floyd, some Americans are finally beginning to face the full extent of systemic racism in our country, m
by Olivia Harrison
Work & Money
For Black Women In Media, A “Dream Job” Is A Myth
Every time a Black woman hits my timeline with yet another horrifying account of workplace racism, images of my own rush to my head.
by Kathleen Newman-B...
Entertainment
You’ll Be Mad You’re Not Competing In This Sims Reali...
March’s sweeping shelter-in-place order triggered a spike in video game downloads and purchases. From Animal Crossing to Fortnite, we gave ourselves
by Michelle Santiago...
Work & Money
Canadian Media Is White AF — I Want A Mentor Who Has Felt That
Over a socially distant coffee this summer, my friend Soo Kim and I chatted about the reckoning that’s erupted in journalism — the dual crises of
by Sadiya Ansari
Discover
R29 Stories & News
Watch
R29 Original Series & Films
Shop
R29's Most Wanted