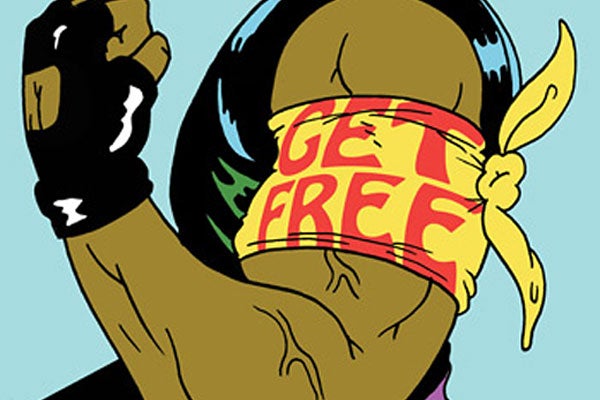 Major Lazer is a Jamaican soldier whose laser-handed, beret-clad persona (somewhere between an ‘80s Hanna-Barbera cartoon and Jax from Mortal Kombat) has served as the nom de guerre for Diplo and Switch’s collaboration of dancehall-leaning pop. Since Major Lazer’s inception in 2009, we’ve come to expect music with a certain level of intensity; Their live show is replete with daggering, and is known for a generally face-meltingly explosive atmosphere.
So in some ways, “Get Free (Featuring Amber of Dirty Projectors),” released late last night, is a new side to the project. Instead of squelching synths and snares, we are treated to a laid-back piece of reggae-inflected pop. It’s Amber Coffman’s extraordinary voice that’s the rightful focus here, and Diplo and Switch provide just the right riddim as Amber hits her trademark high notes (or anti-notes, as they sometimes sound). The result may be the first quintessential summer jam of 2012, and sets a new high bar for what Major Lazer can do.
Advertisement
Watch the video below, or enter your email here for a free download.

Unbothered
So…Are We Ready To Emotionally Divest From These Hollywood ...
The 2021 Emmys came and went like the wind, gathering a small section of Hollywood’s elite in a very small — and, as Seth Rogen pointed out, not exactl
by Ineye Komonibo
Music
Jhay Cortez Steps Into The Spotlight With Timelezz
For years, Jhay Cortez paid his bills by making music for other artists. He was one of the masterminds behind J Balvin’s record-breaking album Vibras in
by Frances Solá-Sant...
Unbothered
Emmys? We Don’t Know Her. These Are Unbothered’s Best TV Shows Of...
The 73rd Primetime Emmy Awards are on Sunday (September 19). The prestigious awards show is usually how Hollywood gauges the best of the best of the most r
by Kathleen Newman-B...
Advertisement
Unbothered
CBS Will Now Turn Its Controversial Activist Competition Series I...
Updated September 16, 2021: After a wave of backlash followed the announcement of its controversial new series, CBS is going back to the drawing board to r
by DarkSkyLady
Entertainment
Selena Gomez Is On The Case
Selena Gomez watches true crime for the same reason many women do: To be prepared.  “In every situation, I automatically think of what I would do to
by Anne Cohen
TV Shows
Wait, Does Bachelor in Paradise End Early This Season?
“This could be the end of Paradise,” one worried contestant says in the promo for the September 21 Bachelor in Paradise episode. No, she wasn&#
by Martha Sorren
Entertainment
Bachelor in Paradise Season 7, Episode 8 Recap: There’s No...
Last week’s episode of Bachelor in Paradise left many in Bachelor Nation hoping for the same thing: Brendan and Pieper facing the same fate as Chris and
by Lia Beck
The Bachelor
Everyone Who’s On Bachelor In Paradise This Season —...
by Martha Sorren
Unbothered
Give The New Generation Of Black Pop Girls Some Time — They’...
On Sunday, September 12, MTV celebrated 40 years of music and music videos at its annual Video Music Awards. The event featured highly anticipated performa
by Ineye Komonibo
Entertainment
Shang-Chi Depicts A World Where Asian Women Can Be Human &...
Spoilers ahead. If there’s one scene from Shang-Chi and the Legend of the Ten Rings I could watch over and over again, it’s Xu Xialing’s introduction
by Roslyn Talusan
Podcasts
This Is What Navigating 2021 Looks Like For Black Women, Accordin...
Go Off, Sis, the podcast from Refinery29’s Unbothered, is back for season 5. And while we’re still in the panorama, the upside is this: We’re finally
by Taiia Smart Young
Unbothered
In Celebration Of Really Love & The Slow Burn
This goes without saying, but dating as a millennial can be a hellish experience. Between extended “talking stages,” ghosting, and starting over every
by Ineye Komonibo
Advertisement
Advertisement
Discover
R29 Stories & News
Watch
R29 Original Series & Films
Shop
R29's Most Wanted