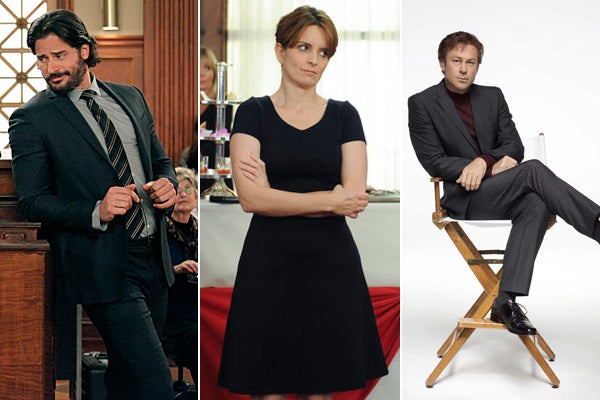 Hump: I don’t know about you guys, but when I bought tickets for Magic Mike this summer, it wasn’t to see Channing Tatum relive his glory days as a male stripper. I mean, I’ve seen Step Up. I didn’t think, “Damn, this would be so much better if he was wearing a thong” while watching it. Call me old-fashioned, but breakdancing loses a bit of its charm when performed by a man wearing floss, humping the floor.

No, I went to Magic Mike to see one Mr. Joe Manganiello — he of the 6’5" frame with abs chiseled by Michelangelo himself — use a penis pump. I mean, to watch him bump and grind as a fireman and a gold statue. Special appearances by Matt Bomer, Manganiello’s equally handsome school chum from Carnegie Mellon, were also much appreciated.

Long story short (Big-Dick Richie pun intended), when Mr. Manganiello reappeared as Marshall’s friend from law school on How I Met Your Mother last week, my first thought was, “Nice to see him returning to bit roles he had back in the day, now that he’s a famous werewolf.” Then, even though his character turned out to be a major a-hole, defending a pharmaceutical company accused of poisoning a lake during the trial on this week’s episode, I was still like, “What’s that? He’s a douche? I can’t hear you over his gorgeous face and virile manliness that probably just impregnated me through the TV.”
Advertisement
Marry: As they say in the old country, I’m pretty sure Liz Lemon and I are beshert. When my grandmother told me on Thanksgiving that she was waiting for an invitation to my wedding, I was like, Cool, G, hope you’re okay with me marrying the fictional head writer of a fake sketch comedy show. On this week’s 30 Rock, Liz and her hunky boyfriend decide to get married because it’s the fast track to adopting a baby. They get engaged through a series of grunts, and then Liz marches triumphantly into Jack’s office to tell him about her wedding plans and outfit: City Hall, sweats, and no bra. That’s basically my dream wedding. Actually, it would be even better if I didn’t have to get off my couch. Do rabbis do home ceremonies? They should start. My Martha Stewart throw would make an excellent DIY chuppah.
Except Liz totally turned on our shared belief that weddings are pointless and became a wedding-obsessed fool, saying she wants to be a “princess” and calling it her “special day.” I do see where she was coming from, though. If i were marrying James Marsden, I’d want to make a huge deal out of it, too. I’d invite everyone I’ve ever met and probably live-Instagram the blessed event (and by “blessed event,” I mean “smoking hot groom”).
But, just when you thought our gal Liz Lemon had become yet another victim of the wedding industrial complex, she showed up to her Tony Bennett-accompanied soirée as Princess Leia because it’s the only white dress she owns and, duh, Leia’s a real princess. That’s what we call a wedding, Lemon-style. A grand old Lemon party, if you will. (Don’t worry, I’m cringing at my own disgusting joke so you don’t have to.)
Advertisement
Kill: There’s not much to be said about Liz & Dick that hasn’t already been scrawled across a thousand blogs. I, for one, am just glad we’ll finally be getting new Lifetime First Looks when we all head to the movies to see Les Mis on Christmas. (Fingers crossed for Rob Lowe in the Casey Anthony story.) So, I’ll just leave it at this: Really, casting directors? Was Grant Bowler honestly the best actor who auditioned to play Richard Burton, or was he just the only one who would take the part?
I’ve seen more chemistry between two subway poles than Lindsay Lohan and Bowler as two people who were supposed to have been so undeniably attracted to one another that they destroyed their marriages and drove each other insane with passion and ardor. I was more comfortable watching sex scenes in Lifetime’s The Craigslist Killer, and that was about a sociopath who murdered people. So, well done, Lifetime movie casting agents, on further ruining any chance Lindsay Lohan has of returning to her Parent Trap/Mean Girls glory, and somehow managing to make a serial killer seem hotter than Richard Burton.

True Crime
We Finally Know The End Of The Golden State Killer Story
Author Michelle McNamara wrote the expansive book I’ll Be Gone in the Dark that HBO has now turned into a documentary series about the search for the
by Martha Sorren
TV & Netflix
Warrior Nun’s Filming Locations Throughout Spain Wil...
If you start watching Netflix’s Warrior Nun for the breathtaking scenery, you’re doing something right. The new series is set against the backdrop of t
by Rachel Paige
Best of Netflix
How Each Episode Of The New Baby-Sitters Club Updates The ...
by Shannon Carlin
TV Shows
Where Does Hanna Go After Season 2’s Deadly Finale?
Warning: Spoilers ahead for Hanna’s season 2 finale, “The List.”  “So, what now?” Those are the final words of Hanna season 2. They are said
by Ariana Romero
Best of Netflix
What Every Warrior Nun Bible Verse Episode Title Act...
by Rachel Paige
Music
24 Songs To Add To Your Fourth Of July Playlist This Year
by Shannon Carlin
TV Shows
Warrior Nun’s Alba Baptisa Breaks Down The Finale
Warning: Spoilers ahead for Warrior Nun’s season 1 finale, “Revelation 2:10.”  “I was a firm believer that No — Father Vincent was always go
by Ariana Romero
Best of Netflix
You Have 10 New Netflix Treats To Binge For July 4th Weekend — He...
by Ariana Romero
Movies
There’s A Mini-New Girl Reunion In Netflix’s...
by Lindsay Denninger
Movies
The Disney+ Recording Is Wonderful, But Will Hamilton Ever...
The outbreak of COVID-19 has kept a lot of people inside throughout these past several months, but now thanks to the upcoming release of Hamilton on Disney
by Kelly Schremph
TV Shows
Your Favorite Quarantine Binge Is Coming Back For An Even Wilder ...
After a whirlwind first season, Hulu original series The Great has been green lit for another installment — huzzah! Deadline reports that the irreverent
by Ineye Komonibo
Books & Art
Take These Audiobooks With You On Your Next Road Trip
by Lydia Wang
Discover
R29 Stories & News
Watch
R29 Original Series & Films
Shop
R29's Most Wanted