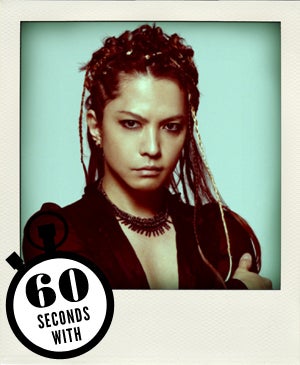 “Big in Japan” may be a cliché to the rest of the world, but what about those bands that actually are really freaking huge that Americans have largely never heard of? L’Arc-en-Ciel is a Japanese stadium-rock group that holds just that description. A mixture of epic ‘80s glam metal and Japanese flamboyance, L’Arc-en-Ciel have sold millions of records, and are known as one of the most popular Japanese acts of all time. Now, L’Arc-en-Ciel are touring the world to celebrate their 20th anniversary as a band, and we had a chance to catch up with lead vocalist, hyde, before their show this week at Madison Square Garden — the first show ever headlined by a Japanese act. Along the way, hyde told us what to expect for Sunday's show, and how long it takes his hair to get like that (hint: It's a long time).
Advertisement

What do you have planned for your show at Madison Square Garden?
"Well, if we perform like we always do in Japan, I’m sure we are going to be successful."

It’s been a long time since you’ve been to the States, are you excited about performing in the U.S. again?
"We have so many 'first things' this time, so I’m excited, but also I’m worried at the same time."

What do you expect the crowd to be like? How are Japanese fans different from American fans?
"Since the venue is large, I’m expecting that we will have both enthusiastic fans and calm fans."

What Japanese music would you recommend to people unfamiliar with Japanese rock ‘n roll?
"Many good bands are out there, but I recommend VAMPS [Editors note: VAMPS is actually hyde’s other band, although when he plays with them, he capitalizes his name (e.g. HYDE)] and OBLIVION DUST!"

How do you prepare for a big show? Do you have any special rituals you do backstage?
"We usually join our hands and try to concentrate together."

Why did it feel like the right time for a world tour?
"Because it’s our 20th anniversary and we just went with the flow of celebration."

It’s been 20 years since you started, what do you think you’ll be doing in another two decades?

"I’m not sure, I have no confidence."

What’s your favorite place to play anywhere in the world?
"So far, Chile’s show reached a fever pitch."

You all have amazing hair. How do you get it to look like that? How long does it take for each of you to get ready?
"My braids take an hour. I guess the other guys’ take like 10 minutes?"

Which American rock bands do you love to listen to? Which have styles you really admire?
"Mötley Crüe, Ratt, and [Linkin Park]."

What’s coming up next for the band?
"I’m going back to my solo project. [Editors note: his solo work is under the moniker HYDE, upper case, also]."

Do you have anything else you want to say to New Yorkers thinking about coming to the show at Madison Square Garden?
"It’s going to be a big day. We will definitely blow you away!"

Check out the live video of L'Arc-en-Ciel performing at MSG courtesy of Fuse, after the break.