Skip navigation!
Story from New York
Apparently, being an extra on Gossip Girl is as simple as, er, showing up unannounced? In what could be this year's best party-crashing moment, one Aussie tourist and die-hard fan, Kate Robertson, took matters into her own hands when she failed to catch a glimpse of her favorite cast filming. Wandering into the famous Waldorf Astoria, she claimed she had reservations at the restaurant, but took the elevator up to the ballroom where, lucky for her, the entire cast was filming.
As any astute acolyte of Blair's learns one must have the right combination of cunning and innocence to get exactly what she wants. Like it was lifted from a GG script, Robertson ended up sitting down in a holding room with other extras decked out in tuxedos and gowns before being confused for one (despite her flip-flops and casual maxi-dress), quickly whisked into hair and makeup, and handed a flute of champagne as "action!" was called.
Advertisement
What was Robertson's take on her dream-come-true moment? "Amazing to see...but tedious work. They did retake after retake," said the tourist-cum-extra. Well, we'd hardly call six hours on set as a partygoer, inches away from handsome Chace Crawford, "tedious," but perhaps we're just jealous of her star-studded turn as "Partygoer #1." (NY Daily News) 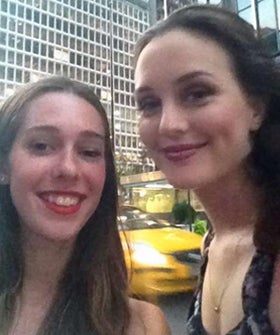