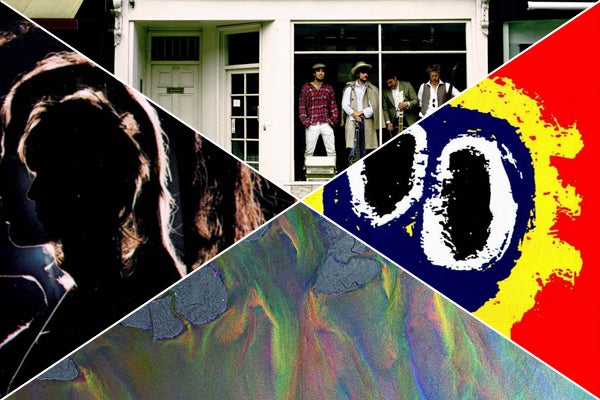 When it comes to hype, Coachella may get the most buzz, but Glastonbury should truly be seen as the mother of all festivals. Just scrolling through the lineup is an epic experience, with so many bands, stages, and DJ sets it can seem impossible to wade through. This year, of course, the big story was is that The Rolling Stones will be headlining, but alongside Jagger and co. we'll be seeing appearances by everyone from Public Enemy, to Chic (with Nile Rodgers), to Phoenix, to Mumford and Sons, to Jessie Ware. Basically, if there's a band that you want to catch, chances as are it will show up in some shape or form at Glastonbury. To give you an idea of just how far the scope of the festival extends, we've selected forty tracks from some of our favorite bands attending the festival. A small fraction of the acts appearing, these should still give you an idea of what to expect come June 26. Get your Wellies ready and we'll see you in Somerset.
Advertisement
Pop Culture
Turns Out Disney Apparently Wasn’t The Only Place Harry & Meghan ...
Harry and Meghan, the Duke and Duchess of Sussex may be working to become financially independent, but it seems they have been looking for jobs outside the
by Shannon Carlin
TV Shows
You May Want To Thank Fyre Festival & Elizabeth Holmes For HBO...
HBO’s new sci-fi comedy, Avenue 5,  is like a mashup between Wall-E, Passengers, and the Fyre Fest documentaries. Co-created by Armando Iannucci, the sh
by Gina Vaynshteyn
Ariana Grande
From Cardi B To Ariana Grande & Post Malone, Here’s Everyone Perf...
by Tara Edwards
Movies
Oprah Winfrey Explains Why She Exited The Russell Simmons Doc — &...
After removing her name from an upcoming Russell Simmons documentary, On The Record, which looks at multiple sexual misconduct allegations against the musi
by Shannon Carlin
TV Shows
Will 9-1-1 & 9-1-1: Lone Star Have A Crossover?...
9-1-1 TV series fans, this is not a fire drill! The new spinoff, 9-1-1: Lone Star, is set to premiere this weekend and will hopefully benefit from running
by Tara Edwards
Movies
Yes, There Is Another Downton Abbey Movie Coming — But Not...
Don’t worry, Lady Mary will return to the big screen…one day. A sequel to the Downton Abbey movie is happening, but not as soon as fans might hope.
by Shannon Carlin
Entertainment
Will Prince Harry & Meghan Markle Pop Up In Your Netflix Queue? I...
Prince Harry and Meghan Markle are coming to a Netflix queue near you — possibly.  No deal has been inked yet, but the Duke and Duchess of Sussex co
by Alexis Reliford
TV Shows
It’s Kim Kardashian West Vs. A Broken Justice System In This New ...
Kim Kardashian West is tackling America’s mass incarceration problem in the new documentary Kim Kardashian West: The Justice Project. The two-hour specia
by Alexis Reliford
Best of Netflix
Sex Education Season 2 Binge Club Recap: Episodes 1-8
Let Otis’ sexual awakening begin. After his epic season 1 finale wank fest, Otis (Asa Butterfield) can’t seem to give his hand a break. Sex Education s
by Shannon Carlin
Pop Culture
Is Harry Still A Prince? & Other Questions About Prince Harry & M...
Prince Harry and Meghan Markle continue to step further away from the traditional royal path by abandoning their titles, an unexpected announcement just 10
by Tara Edwards
TV Shows
Aaron Hernandez’s Former Fiancée Speaks Out For The First Time Si...
There are several questions about Aaron Hernandez that Netflix’s chilling new docuseries, Killer Inside: The Mind of Aaron Hernandez, attempted to answer
by Lydia Wang
Entertainment News
Prince Harry & Meghan Markle Will Leave Their HRH Titles Behind —...
When Prince Harry and Meghan Markle announced that they would be taking a step back from the royal family, there was a lot of confusion about what, exactly
by Lydia Wang
Discover
R29 Stories & News
Watch
R29 Original Series & Films
Shop
R29's Most Wanted