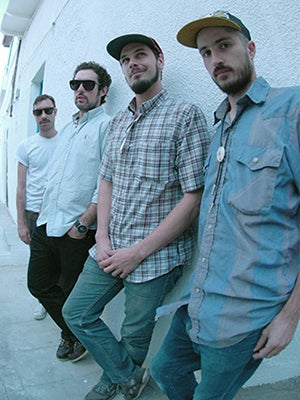 What do The Rolling Stones, Bob Dylan, Beyonce, and Katy Perry all have in common? All of these musical acts have given fans an all-access pass to their lives via documentaries.
Well, one more lauded musical act is joining the silver-screen club: The Black Lips, whose hotly-anticipated documentary Kids Like You and Me premieres on Saturday, June 8 at Sonos Studio. The film chronicles the group's tour through the Middle East with their rocker friends Lazzy Lung — so you know it'll be one entertaining and thought-provoking ride. This film marks the final installment of Sonos Studio's three-part screening series, PLAY, and will also include dinner by AOC Wine Bar and Lucques, a Q&A session with the director, and a DJ set by the film subjects themselves.
Advertisement
Sound like a good time to you? Us, too! Click here to register for the screening for free. Just one of the many perks of being an avid R29 reader!
When: Saturday, June 8, 7-10 p.m.
Where: Sonos Studio, 145 North La Brea Avenue (near Beverly Boulevard); no phone.

Music
Rising Black Women Singers You Shouldn’t Sleep On
by Ineye Komonibo
Movies
Movie Haunted Houses You Couldn’t Pay Us To Live In
by Elena Nicolaou
TV Shows
Rewatch Naya Rivera’s Most Empowering Glee Moments
by Natalie Morin
Movies
Viola Davis Hopes Younger Black Actresses Can “Pop” Without Havin...
Since her breakthrough in Hollywood thanks for her brief but critically acclaimed appearance in the 2008 film Doubt, Viola Davis has built a reputation for
by Ineye Komonibo
TV Shows
Was Your Favorite Show Affected By Reality TV’s Mass Exodus?
For better or for worse, the television landscape has faced a serious shakeup within the last few months. It would be easy to blame the global pandemic for
by Ineye Komonibo
Best of Netflix
Everyone Is At Home Watching These 10 Shows & Movies On Netflix R...
by Ineye Komonibo
Pop Culture
Police Say Naya Rivera “Mustered” Enough Energy To Sa...
On July 13, Glee actress Naya Rivera’s body was found in Lake Piru in Southern California, five days after she went boating with her 4-year-old son Josey
by Natalie Morin
Pop Culture
Cast Of Glee & Other Celebrities Honor Naya Rivera
by Natalie Morin
Entertainment News
A Body Has Been Found In The Lake Where Naya Rivera Went Missing
Update July 13, 2020: Ventura County’s investigation into the disappearance of Naya Rivera has led to the discovery of an unidentified body. Accordin
by Ineye Komonibo
Entertainment News
Police Are “Confident” They Have Found The Body Of Naya Rivera Af...
After days of actively searching for her body in Southern California’s Lake Piru, local police officers have confirmed that the body of Naya Rivera has b
by Ineye Komonibo
Best of Netflix
Add These 28 Movies By Black Creators To Your Watch List ASAP
by Lia Beck
Best of Netflix
Treat Yourself To These Netflix Reality TV Shows
by Elena Nicolaou
Discover
R29 Stories & News
Watch
R29 Original Series & Films
Shop
R29's Most Wanted