Skip navigation!
Story from Beauty
J.Lo's roster of exes is longer than most people's grocery lists. But, messier than the breakup with P.Diddy or Ben Affleck was the split she had with her former makeup artist Scott Barnes. The beauty guru, who gave Jenny that signature glow, was ousted from the entourage after allegedly leaking private info about the pop star. Since then, Barnes has gone on to release not one, but two makeup-centric tomes, and has gussied up nearly every gal in Hollywood — quite the rebound! And, although he's taking over TInseltown one red carpet at a time, he remains hush-hush about the woman who started it all, leading us to believe the accusations were nothing but bologna.
Advertisement
Last time we tapped Barnes for makeup lessons he kept mum about the diva, which is why this month's issue of Allure is already in rapid circulation around the office. Yes, he finally opened up about J.Lo to the glossy, and gave readers some juicy deets about being a member of her inner circle. For example, he revealed that she didn't properly say sayonara — she just stopped calling. Ouch.
We won't spill the beans, but we recommend you hit the newsstand ASAP for the tabloid-worthy scoop. Us Magazine, meet your match. (Allure) 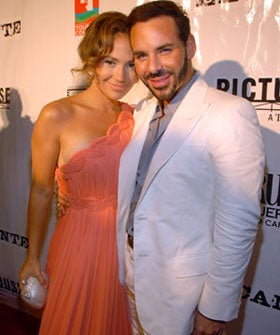 Beauty
15 Fresh New Year Haircut Trends Predicted By London’s Top ...
by Jacqueline Kilikita
Manicurated
3 Nail Color Trends Bringing Good Vibes To The 2022 Manicure
When it comes to picking a nail polish color, there’s no right or wrong choice. Still, the stakes can seem high when you’re standing in front o
by Megan Decker
Perfume
Snif’s Latest Fragrance Collection Is Genderless, Long-Lasting & ...
Say hello to Snif‘s newest fragrance babies. The buzzy, direct-to-consumer scent brand is back with its third perfume collection — and it’s d
by Mercedes Viera
Advertisement
Beauty
6 Hairstyle Trends That Are Sparking Joy In 2022
If you’re feeling that January burnout, we’re right there with you. The thing about this time of year is that there are a lot of feelings — b
by Megan Decker
Beauty
Nicole Byer’s Self-Care Routine Involves Moisturizer, Pole ...
The connection between skin and mental health has never been clearer — and, in times of stress and uncertainty, a skin-care routine can be as much of a d
by Amanda Mitchell
Beauty
This Afro-Latina Never Saw Herself Represented Growing Up — Here’...
Growing up in the suburbs of Detroit, Bianca Kea was acutely aware that outside of her family, there were no other Afro-Latinxs that looked like her. No on
by Refinery29
Skin Care
The Ordinary’s Most Popular Acne Serum Is Finally Back — & ...
Not long ago, if you were to ask any skincare enthusiast to share their top products for treating breakouts, The Ordinary’s Salicylic Acid 2% Solutio
by Jacqueline Kilikita
Beauty
Charlotte Tilbury’s New Foundation Is Beautiful — 6 Editors...
Charlotte Tilbury recently launched a brand-new liquid foundation range, called ‘Beautiful Skin.’ The name is based on the formula, which is in
by Megan Decker
Beauty
How to Get Plump & Delicious Skin, According to Glow Expert Nam Vo
Supported by Biossance Makeup artist Nam Vo doesn't really wear much makeup at all. Her aesthetic is, and always has been, really glowy skin — she calls
by Megan Decker
Beauty
This Latinx Designer Is Challenging Hair Stereotypes With Her T-S...
Sherly Tavarez was only six when her mom started relaxing her hair. “I remember thinking I would never know what it was like to have ‘good hair’,”
by Refinery29
Beauty
The Powerful, Affordable British Skin-Care Brand That You Need To...
There are a handful of cult skin-care brands you’re likely to spot when scouring #shelfies belonging to beauty influencers, dermatologists, and makeu
by Jacqueline Kilikita
Beauty
Saweetie Just Wants Balance & MAC Glitters
Is there anyone more relatable than Saweetie? As a card-carrying member of Eyebrow Contour Addicts Anonymous, it’s incredibly refreshing to learn tha
by Amanda Mitchell
Advertisement
Advertisement
Discover
R29 Stories & News
Watch
R29 Original Series & Films
Shop
R29's Most Wanted