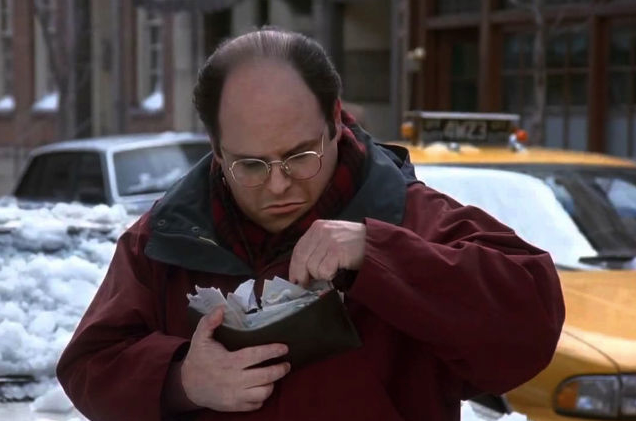 Photo: Courtesy of NBC.
When I was a cultural studies major, a prof once told me that art imitates life. Being the bull-headed, know-it-all academic that I was, I refused to believe her — until now.
Fans of Seinfeld, (a.k.a. everyone on planet Earth) will remember that professional schlub George Costanza's dream job was that of an architect. It was a lie he resorted to whenever confronted by a potential lover, an old rival, or anyone else who threatened his imaginary throne. In what can only be described as a cruel twist of fate, Jason Alexander — the actor who portrayed George — now finds himself embroiled in a meta-universe where, guess what? Art has imitated life.
"In a flagrant display of brutal irony, my son is currently dating an architect," the actor tweeted on Friday.
Since the show's ending, the rest of us have lived each and every day with the iconic sitcom's fabric embedded in our very souls. Now it's Alexander's turn. Don't worry Jason, the Junior Mints are on us. (Uproxx)
Movies
Let’s Talk About Promising Young Woman’s Ugliest Scene
It would have been easier to make the heroes and the villains clear cut in Promising Young Woman. The dark comedy, written and directed by Emerald Fennell,
by Natalie Morin
Movies
All The New Movies Coming Out On The First 3-Day Weekend Of 2021
by Ariana Brockington
Movies
Everyone Getting In On The Action In Netflix’s Outside t...
by Joyce Chen
Entertainment
Every Angsty Song From The Ultimate Playlist of Noise Soun...
by Sarah Midkiff
Entertainment
One Night In Miami’s Secret Ingredient Is Its Elec...
It only takes moments into Regina King’s directorial debut before you realize — like really start to understand — what the term “actor’s director
by Kathleen Newman-B...
Movies
6 Movies That Take You Deeper Into The Vicious World Of Promising...
by Anne Cohen
Movies
My Respectful Thirst For Malcolm X Was Reinforced By One Night...
One Night in Miami, an emotional journey presented to us by first-time director Regina King, gathers together four of Black American history’s most promi
by Ineye Komonibo
Movies
The Turmoil In Tom Holland’s New Movie Is Based On A True S...
In 2019, Tom Holland shaved off his signature locks for a role in a new project, stunning fans everywhere with the sight of his freshly buzzed head. Two ye
by Ineye Komonibo
Movies
Armie Hammer Responds To Alleged DMs After Stepping Away From J.L...
Actor Armie Hammer will “step away” and no longer take part in the upcoming action comedy movie Shotgun Wedding. The film, which also stars Jen
by Natalie Morin
Movies
Judas & The Black Messiah Is A True Tale Of Black Power & ...
In the upcoming political drama Judas & the Black Messiah, the story of Fred Hampton’s storied bad blood with the FBI takes center stage. The fil
by Ineye Komonibo
Movies
Netflix Teases Lara Jean & Peter’s Fate In Emotional To All T...
The Super Bowl is officially within sight next month — no, not that one. We obviously mean the Love Super Bowl, in which we’ll finally (hopefully!) fin
by Natalie Morin
Movies
Now That Bridgerton‘s Got All Us All Horny For His...
by Anne Cohen
Discover
R29 Stories & News
Watch
R29 Original Series & Films
Shop
R29's Most Wanted