Skip navigation!
Story from Movies
Photo: REX USA/Jonathan Hordle/Rex.
We've seen quite a bit of Michael Fassbender in the past few years, and that's not even including all those X-Men movies. But, in the new dark comedy Frank, we see a little less of the actor, as he plays an eccentric musician who wears an oversized, perfectly round, smiling head at all times.
Frank's bandmates, played by Maggie Gyllenhaal, François Civil, and Carla Azar, are used to Frank's quirks, but the new keyboard player Jon (Domhnall Gleeson) is a little freaked out by the whole thing. He's dying to know what Frank's face really looks like. They come up with a system where Frank explains what his face is doing under the head — smiling, blushing, looking pleased — but Jon can't resist trying to get to the bottom of what's going on beneath the mask. Jon sneaks into Frank's bedroom to investigate while Frank's in the shower, and he finds that Frank even showers with the damn thing on. Meanwhile, Frank's bandmates are equally put off by Jon, especially the temperamental thereminist Clara (Gyllenhaal). It's all coming to a head, if you will, especially once Jon gets them a gig at SXSW.
Advertisement
What's it like donning that crazy fiberglass head with its immutable, placid punim? A lot of fun, as you can see from Fassbender’s performance on The Colbert Report the other night.
"I found it really liberating," Fassbender said during a press conference with the film's cast and crew. "I was learning an accent, and I'm practicing like this," he intoned in Frank's flat Kansas cadence. "And, once you put the head on, there's a reverb thing that's going on in there. It kind of puts the hearing off a little bit, and it's hard to sort of locate some stuff, but that was it."
The inspiration for his character was Frank Sidebottom, the alter ego of the late Chris Sievey, a British musician who passed away in 2010. Cowriter Jon Ronson, a prolific journalist and author of books like The Psychopath Test: A Journey Through the Madness Industry and The Men Who Stare at Goats, played the keyboard in Frank Sidebottom's Oh Blimey Big Band in the '80s.
The major thing that Sievey's Frank and Fassbender's Frank have in common is the cheery, expressionless head, and that's about it. Ronson explained that Chris "didn't really want there to be a character based on [him] in the film." He added, "Chris didn't suffer from any mental illness."
Ronson drew inspiration from friends and other musicians, including Daniel Johnston and Captain Beefheart. It's no coincidence that Gleeson's character is a keyboardist named Jon, but that's pretty much where the similarities to real-life people begins and ends.
Advertisement 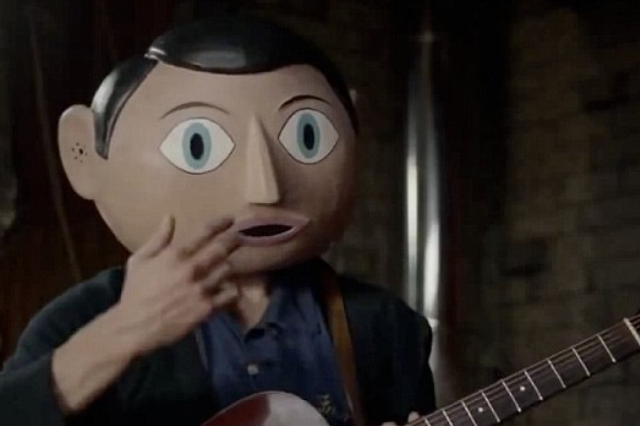 Photo Courtesy of Runaway Fridge Productions.
Director Lenny Abrahamson noted that, despite the seeming lack of expression on Frank's face, "The mask isn't neutral. What the audience feels is happening ends up being there somehow because we project our feelings onto other people."
"As soon as I put the head on, it gave me an element of mischief. It gives the anarchic quality of Chris Sievey's original Frank Sidebottom character," Fassbender said. "For the other actors, it never mattered that I couldn't make eye contact really with other actors, because Frank is Frank, and Frank lives in his own universe, so I was hoping for them it would be the same. 'Is it listening? Is he not listening? Did he hear that?' They're used to him anyway."
Although Fassbender didn't quite take to the comparison between the scent inside Frank's head by the end of production and the shaggy muppets roaming Times Square, everyone seemed to agree that Frank's head is pretty personal.
"I think we would have to know you really well and like you a lot to put that head on," Gyllenhaal said with a straight face.
"And, we didn't," Gleeson added. "That tells you everything."
"It seemed like, really, there'd be a lot of you in there," Gyllenhaal observed.
"It's like wearing somebody else's underpants," Gleeson offered.
"It's like a beard that got out of control. There's crumbs in there. Pretty gross," Fassbender agreed.
Movies
Let’s Talk About Promising Young Woman’s Ugliest Scene
It would have been easier to make the heroes and the villains clear cut in Promising Young Woman. The dark comedy, written and directed by Emerald Fennell,
by Natalie Morin
Movies
All The New Movies Coming Out On The First 3-Day Weekend Of 2021
by Ariana Brockington
Movies
Everyone Getting In On The Action In Netflix’s Outside t...
by Joyce Chen
Entertainment
Every Angsty Song From The Ultimate Playlist of Noise Soun...
by Sarah Midkiff
Entertainment
One Night In Miami’s Secret Ingredient Is Its Elec...
It only takes moments into Regina King’s directorial debut before you realize — like really start to understand — what the term “actor’s director
by Kathleen Newman-B...
Movies
6 Movies That Take You Deeper Into The Vicious World Of Promising...
by Anne Cohen
Movies
My Respectful Thirst For Malcolm X Was Reinforced By One Night...
One Night in Miami, an emotional journey presented to us by first-time director Regina King, gathers together four of Black American history’s most promi
by Ineye Komonibo
Movies
The Turmoil In Tom Holland’s New Movie Is Based On A True S...
In 2019, Tom Holland shaved off his signature locks for a role in a new project, stunning fans everywhere with the sight of his freshly buzzed head. Two ye
by Ineye Komonibo
Movies
Armie Hammer Responds To Alleged DMs After Stepping Away From J.L...
Actor Armie Hammer will “step away” and no longer take part in the upcoming action comedy movie Shotgun Wedding. The film, which also stars Jen
by Natalie Morin
Movies
Judas & The Black Messiah Is A True Tale Of Black Power & ...
In the upcoming political drama Judas & the Black Messiah, the story of Fred Hampton’s storied bad blood with the FBI takes center stage. The fil
by Ineye Komonibo
Movies
Netflix Teases Lara Jean & Peter’s Fate In Emotional To All T...
The Super Bowl is officially within sight next month — no, not that one. We obviously mean the Love Super Bowl, in which we’ll finally (hopefully!) fin
by Natalie Morin
Movies
Now That Bridgerton‘s Got All Us All Horny For His...
by Anne Cohen
Discover
R29 Stories & News
Watch
R29 Original Series & Films
Shop
R29's Most Wanted