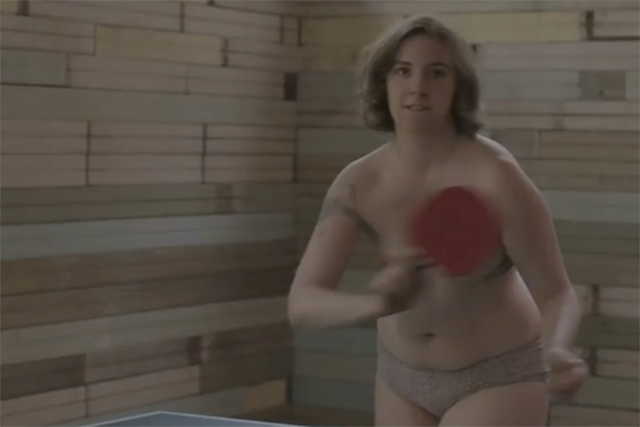 Photo: Courtesy of HBO.
Rumors of Lena Dunham's nudity have been greatly exaggerated. BuzzFeed's Louis Peitzman, who, in response to a new wave of discussion around the Girls' skin factor, decided to calculate just how much screen time nudity gets on the HBO comedy. It turns out to be not that much: Peitzman asserts it's only roughly 3% and provides a handy pie chart to drive the point home. He also argues that despite the criticism that much of the show's nudity is random and pointless, the overwhelming majority of it is in contextually appropriate situations: sex, showering, dressing, and, er, relieving oneself. He only counted two so-called random flashes of nudity — the topless ping-pong game, and Dunham's infamous Icona Pop-dancing, nipple-flashing coke scene. He admits that Dunham-as-Hannah does get the lion's share of nude scenes on the show (64%), but hey, she is the lead character.
Advertisement
Overall, Peitzman argues that Girls is less sexually explicit than Game of Thrones or True Blood, while more willing to offer parity between sexes in its nude scenes. Even though female nudity dominates the show (74%), so do females in general (the show is called Girls, after all). "There is still a significant amount of male nudity, more than you’re likely to see outside on another series with four female leads. (Sex and the City, which Girls is forever compared to, springs to mind.)" Peitzman wrote.
Peitzman concludes that people overestimate the amount of actual nudity on the show because Girls is a fairly sexually explicit show overall. Many of the most lurid sex scenes don't even contain full nudity, just unabashedly risqué implications. He also points out the inevitable polarizing topic: Some people just aren't that comfortable with Dunham's full-figured body, so every bit of it they see feels like too much. "She seems, to some, gratuitously naked, even if she’s only naked for a very small percentage of Girls," he writes. In other words, it's the same sad and myopic media status quo that keeps women worried about the size and shape of their bodies.
Girls' third season premieres tonight, and skin or no skin, we're sure it will fill the shock-value void we've endured since the Breaking Bad finale. (BuzzFeed)
Movies
Here’s How That Palm Springs Time Loop Works
Warning: Major Palm Springs spoilers ahead. It’s a trope as old as time: Two lonely wedding guests get drunk, then get together. In Palm Springs, though,
by Lydia Wang
TV & Netflix
The End Of The Old Guard Practically Promises A Sequel — W...
Warning: Spoilers for The Old Guard ahead.  Netflix’s The Old Guard may not be the typical comic book movie, but its ending still sets up an all-but
by Ashley Chervinski
Movies
The Ending Of Relic Reveals A Monster We’d Rather Not Th...
This article contains spoilers for Relic, out on VOD July 10.  The great power of Relic, Natalie Erika James’ terrifying directorial debut, is how d
by Anne Cohen
Movies
Every Song In Palm Springs Will Leave You California Dreaming
by Shannon Carlin
Movies
Kiki Layne’s Reluctant The Old Guard Hero Is An All-...
When T’Challa/Black Panther (Chadwick Boseman) was officially introduced as part of the Marvel Cinematic Universe in 2016’s Captain America: Ci
by Ineye Komonibo
Movies
What Is Real & Imagined In America’s Dad’s Latest WWI...
Tom Hanks is back in a captain’s hat yet again. In Greyhound (out on Apple TV+ July 10), Hanks plays Ernest Krause, a U.S. naval officer during World
by Lia Beck
Movies
Everyone You’re About To Meet In Charlize Theron’s Ne...
by Ashley Chervinski
Movies
The Palm Springs Cast Is So, So Good
by Lydia Wang
Movies
Zendaya Filmed A Secret Quarantine Movie & Here’s What It T...
If you weren’t completely convinced that Zendaya can do anything before, this basically proves it. According to Deadline, the actress teamed up with
by Natalie Morin
Best of Netflix
If Netflix’s Mucho, Mucho Amor Is The First You̵...
Warning: spoilers are ahead for Mucho, Mucho Amor: The Legend of Walter Mercado. Netflix’s new documentary Mucho Mucho Amor: The Legend of Walter Mer
by Shannon Carlin
Movies
It’s Time To Talk About The Hot Hook Discourse
Jude Law is in talks to play the villain Captain Hook in Disney’s live-action version of Peter Pan, according to Variety. The upcoming film, titled Peter
by Natalie Morin
Amazon
17 Must-See Movies That Show America As It Actually Is
by Lia Beck
Discover
R29 Stories & News
Watch
R29 Original Series & Films
Shop
R29's Most Wanted