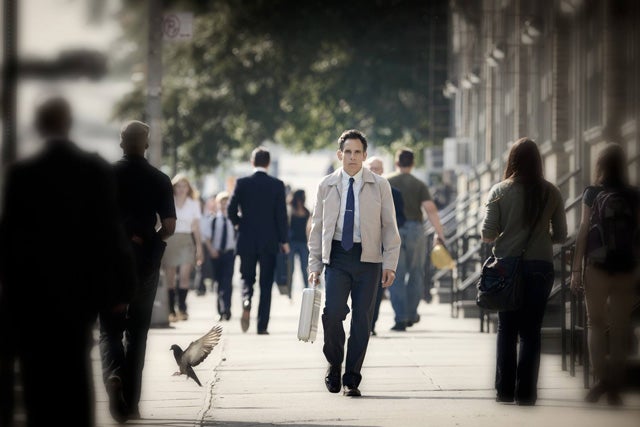 Photo: Courtesy of 20th Century Fox.
If you're the kind of corny, sappy person who is heartened by movies, The Secret Life of Walter Mitty will provide you with some major inspiration. If you're not, well, you may as well turn back now. Though the film, in which Ben Stiller directs and stars, has garnered some divisive feedback, in our humble opinion, these reviews can be easily attributed to the perspectives of two different audiences: the dreamers and the nonbelievers. Those of us with wild imaginations and an appreciation for the fantastical will fall in love — cynics need not apply.
The premise, which is based on the 1930s short story of the same name, seems simple at first. Walter Mitty (Stiller) is a regular Joe who hasn't lived up to his own expectations or fulfilled his own dreams. Sounds familiar already, doesn't it? He's a photo editor at a soon-to-be-extinct Life magazine, and he's got a giant crush on his coworker Cheryl (Kristen Wiig), who seems to have no idea he exists. And, this is where the simplicity ends.
Advertisement
Mitty also happens to have the wildest imagination of all time; he constantly finds himself wandering into fantasies that defy reality — and the audience is taken along for the ride. One minute, he's on the phone with eHarmony customer service trying to figure out why he can't wink at Cheryl, and the next, he's leaping off the elevated subway platform to rescue her (nonexistent) cat from a (nonexistent) burning building. As Stiller explained during a special screening, his character's daydreams stem from a yearning to escape from the everyday. "The fantasies in Walter's head related to parts of himself," he said. "Who he could be or who we wanted to be. There were elements of who Walter is under the surface that hadn't been realized."
So, did we lose you already? Don't worry — the lines between reality and the impossible are supposed to blur. Mitty's life starts to collapse in on him when it's announced that Life will publish its last issue. The evil corporate everyman (played hilariously by a mustachioed Adam Scott) in charge of the "transition" decides the cover must feature an image from elusive photographer Sean O'Connell that seems to have gone missing. Our leading man is then tasked with tracking him down, and this is where the movie becomes outlandish.
As Mitty decides to eschew, well, pretty much everything in pursuit of this all-important photo negative, we see him face every self-doubt and regret he's ever had. The nerdy, lonely guy who just can't get the girl of his dreams (or any girl, for that matter) is suddenly hopping on a plane to Greenland, jumping from a helicopter off the Icelandic coast, and climbing the Himalayas as he chases after O'Connell. Because Walter Mitty relies on our guy's inner fantasies as its central device, this flick needn't worry itself with all the little details that most movies get bogged down by — like, you know, plot. The audience is so enamored with the idea of Mitty taking part in some of the most spectacularly hilarious adventures that it doesn't care how unrealistic it is when he gets a call from his eHarmony customer-service rep while he's on top of a remote mountain.
Advertisement
In fact, one of the biggest challenges for Stiller as the movie's director was trying to keep these fantasies to a minimum. "Originally there was a fantasy that happened on Sixth Avenue based on Lawrence of Arabia," Stiller told us. "Walter's bosses come galloping up on horses, and they grab Cheryl and ride the horses through the subway. They then come out the other end of the subway, and suddenly they're in the desert, and they end up singing the song from Grease. Trust me: It was money, basically." 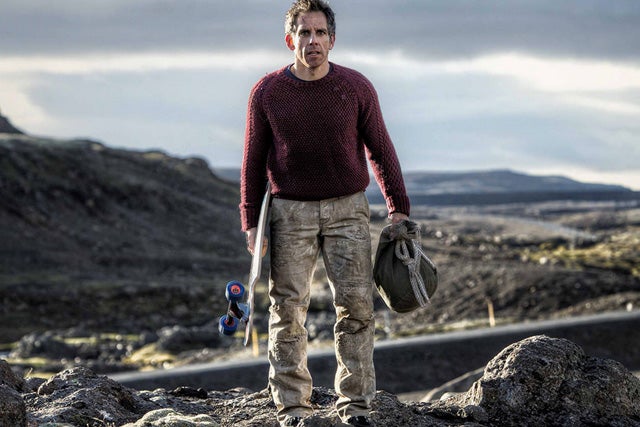 Photo: Courtesy of 20th Century Fox.
Mitty picks at our collective need to daydream and our constant desires to get more out of life. We all just want to escape sometimes, and Stiller & Co. have managed to help us along. More importantly, the flick reminds us that you don't have to be an incredible person to have a remarkable story. The intricacies of the human spirit are there in everybody, whether you're the world's most prominent nature photographer or a pencil pusher in a mundane office.
This sense of the incredible was so addicting that it even came to affect Ben Stiller in the role of Walter. He did as many of the eye-opening stunts as possible, and he found himself simply dumbfounded at the beauty and grandeur of it all. "At one point, I had to do a shot in the water off the coast of Iceland," said Stiller. "The camera was in a nearby boat that had to go away for a shot, and I was just in the water in the North Sea, with nobody around me, in five-foot swells. And, I had that moment where I thought, 'Okay, this is a movie, but this is also real life.' It was one of those moments where I realized that I'd never in a million years have a chance to do something like this if I didn't have the opportunity to make this movie."
Of course, Mitty's also determined to get the girl — many of his fantasies center on Cheryl and his desire to impress her. But, whether he gets her in the end isn't the point. He finds joy in life again, and while that may sound sappy, it's arguably something we all seek. We dare you to watch this movie and not crack a smile, shed a happy tear, or, at the very least, realize you've got a whole lot of living to do. This movie is earnest as all get out, but in this day and age, that's not the worst thing a film can be.
Unbothered
Janelle Monáe Is Writing A Short Story Collection Inspired By
Janelle Monáe is making her literary debut with The Memory Librarian: And Other Stories from Dirty Computer. Based on the Afrofuturistic world of Dirty Co
by Stephanie Long
Unbothered
Ari Lennox Shares An Update After Her Amsterdam Arrest
Updated December 2, 2019: Days after being detained at Schiphol Airport in the Netherlands, Ari Lennox has resurfaced on social media to give worried frien
by Ineye Komonibo
Entertainment
The ‘Jennifer Lawrence Pipeline’ & The Impossible Standards For W...
Jennifer Lawrence is back. The Oscar winner who was once the self-deprecating crown jewel of the Hollywood scene has been moving in the shadows in the past
by Maggie Zhou
Advertisement
Unbothered
The 10 Best Black Corny Christmas Romances Of The Season
by Kathleen Newman-B...
Unbothered
Virgil Abloh & Chadwick Boseman’s Deaths Remind Us That Black Art...
“I don’t have to do nothin’ but stay Black and die.” This oft-repeated phrase in Black communities of a certain generation tells a story of people
by Gloria Alamrew
Unbothered
William Jackson Harper In Love Life Is The Chaotic But End...
I just can’t stop thinking about the new season of HBO Max’s Love Life. More specifically, I can’t stop thinking about William Jackson Harper in the
by Ineye Komonibo
Black Friday
We’re Diving Headfirst Into These Black Friday Streaming Deals
When prepping our Black Friday and Cyber Monday shopping wishlists, lots of must-have items come to mind each year: big-ticket home items, covetable fashio
by Amanda Randone
Unbothered
Bruised Isn’t Great, But Halle Berry And Sheila Atim Are
Welcome to “What’s Good,” a column where we break down what’s soothing, distracting, or just plain good in the streaming world with a “rooting fo
by Kathleen Newman-B...
Somos Latinx
The Latinx Students of Bayside Want to Know Why Schools Don’...
Correction: An earlier version of this article referred to Castilian Spanish, which is the type of Spanish spoken among most Spanish-speakers around the wo
by Cristina Escobar
Unbothered
Black Selling Sunset Stans, It’s Our Time
When Netflix first dropped Selling Sunset, the world wasn’t sure of how interesting a series about the personal and professional lives of the agents of T
by Ineye Komonibo
Unbothered
King Richard May Be About Richard, But Its Strength Is Sho...
When Venus and Serena Williams first rocketed into the tennis stratosphere, no one could have imagined the indelible impact that the sister duo would have
by Ineye Komonibo
Unbothered
Two Men Convicted For The 1965 Assassination Of Malcolm X Have Be...
Nearly 60 years after the shocking assassination of civil rights leader Malcolm X, a new development in the investigation into his murder has led to t
by Ineye Komonibo
Advertisement
Advertisement
Discover
R29 Stories & News
Watch
R29 Original Series & Films
Shop
R29's Most Wanted