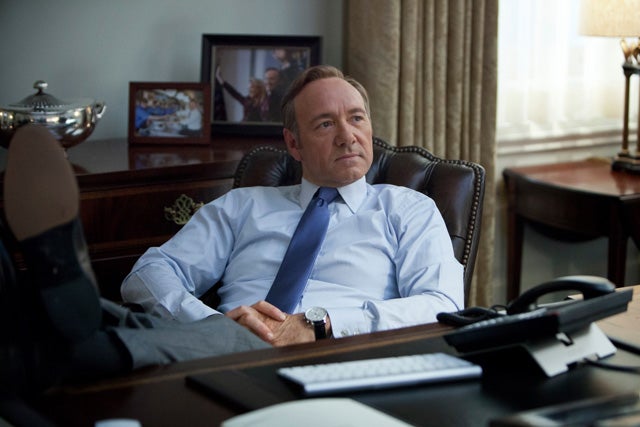 Photo: Courtesy of Netflix.
We're not the first ones to come to this conclusion, but we're officially dubbing 2013 "The Year of Netflix." The subscription service has been popular for some time now, but it has knocked it out of the park as of late. Thanks to the revival of Arrested Development and stellar original programming, the company's stocks — and reputation — are red hot. Not to mention the fact that Netflix earned a whopping 14 Emmy nominations. We've already developed a serious addiction to pretty much every show, and the 2014 lineup isn't going to do anything to help us break away from our laptops.
Advertisement
First up is the second season of Lilyhammer, a Norwegian-American series about a New York gangster that debuts in December. Frank Tagliano enters into witness protection after testifying against the Mafia and ends up in Norway. The idyllic surroundings are anything but boring; however, as Tagliano starts getting up to his old tricks (you know, blackmail, extortion, and the like). This show was actually the first of the Netflix originals; although, it didn't garner as much notoriety. This time around, the British mob is onto Frank and his not-so-legal dealings, which means the show will be graced with all kinds of English accents. That's a win-win.
The next season of House of Cards will finally be entering our lives in February, but make sure not to get too attached. Sadly, it may be the show's last, according to rumors from executive producers. The team is hoping for more, obviously, but Netflix hasn't ordered episodes past the second season, and both Kevin Spacey and Robin Wright have their eye on movies again. But, if the rumors are true, the show will certainly be going out with a bang. Spacey's Francis Underwood will be just as Machiavellian and sinister, and Zoe, Janine, and Lucas will be teaming up to bring his backhanded sabotages to light. Anyone with a special interest in political drama won't be able to shut their laptop.
Netflix's other fan favorite, Orange Is The New Black, will be back for more prison goodness in the spring of 2014. Piper and her pals (or anti-pals) are the company's cash cow right now, so the team is pulling out all the stops. Season two is currently filming right now in New York, and Taryn Manning is back — which means Pennsatucky is alive and kicking after Piper's beatdown at the end of season one. Laura Prepon is on board as well, but there's no word yet on just how involved Piper's ex will be in the plot. We just know we've been really missing the ladies of Litchfield.
Last but not least, the network's newest show in development has us majorly perking up. The series comes from the creators behind FX's Damages, and is being touted as a psychological thriller drama. It will center on a group of adult siblings who have secrets revealed when a black sheep comes back to town. Those are the only details that have been released as of yet, but we'll be sure to keep you updated on new information. We're already mentally preparing for our new addiction.
TV Shows
Chloe Veitch Reveals She May Have Found Romance On The Circle<...
Major spoilers for The Circle on Netflix are ahead. “I’m the most unlucky person in love on Netflix,” The Circle star Chloe Veitch laughs during a re
by Ariana Romero
TV Shows
The Masked Singer Robopine Posted A Major Spoiler On Faceb...
Update: This story was originally published before The Masked Singer revealed Robopine’s identity. Spoilers are ahead. The Masked Singer season premi
by Ariana Brockington
TV Shows
Everyone Who’s Left On The Masked Singer In Season 5
by Ariana Brockington
Advertisement
TV Shows
The Circle Season 2 Winner Explains The Tiny Detail That A...
Spoilers are ahead. Everyone came to The Circle season 2 with a strategy, but preparation paid off when it came to the ultimate winner this time around. Ma
by Leah Marilla Thomas
TV Shows
Admit It — The New House Of the Dragon Photos Are Piquing ...
by Ineye Komonibo
Best of Netflix
Mindhunter Fans Have A Head Start On Netflix’s New <...
After watching Netflix’s new true crime series Sons Of Sam: A Descent Into Darkness, it’s time to revisit the Son of Sam interview on Mindhunte
by Shannon Carlin
TV Shows
We Still Owe Melinda Clarke For Bringing Us Julie Cooper On T...
“Jimmy, honey, did you get my froyo? Pistachio. Thanks, sweetie.” With those 10 words and a sly delivery, Melinda Clarke turned a guest star appearance
by Anne Cohen
TV Shows
The New GoT Series Is Already Failing Its Women Characters
This post contains spoilers for Game of Thrones. Remember how Game of Thrones spent eight seasons building up its women characters as the next leaders of W
by Anne Cohen
Britney Spears
Britney Spears Reportedly Won’t Ask Court To End Her Conser...
Update May 5, 2021: Sources have reportedly told TMZ that Britney Spears is planning to use her time during her upcoming special hearing on June 23 to dire
by Natalie Morin
Pop Culture
Paris Hilton Reveals The Truth Behind Her Infamous “Stop Being Po...
Once viewed by the media as a vapid heiress and socialite, Paris Hilton is now having a sort of Parissance in the public sphere. It first came in the form
by Natalie Morin
TV Shows
The Cancellation Of This New Netflix Original Series Has Fans Ree...
Another day, another Netflix original show cancelled before it could even reach its full potential. The most recent series from the streaming platform to g
by Ineye Komonibo
Best of Netflix
Son Of Sam Killer David Berkowitz Keeps Changing His Story — Even...
Netflix’s new true crime series The Sons of Sam: Descent Into Darkness takes a closer look at a case that, in the late ‘70s, terrorized the city of New
by Shannon Carlin
Advertisement
Advertisement
Discover
R29 Stories & News
Watch
R29 Original Series & Films
Shop
R29's Most Wanted