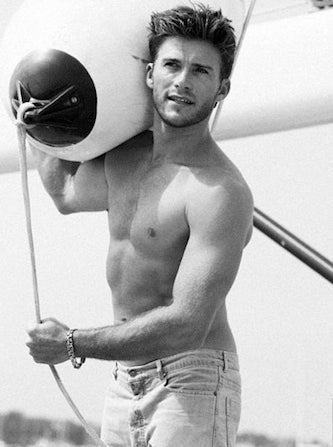 Photo: via @scotteastwood.
The race for the next Christian Grey is getting muddier and hunkier as the days go by. It's anyone's guess as to which Hollywood Adonis will play Fifty Shades' resident bad boy. What is for sure (at least for now) is the film's producers have five actors in mind — one of them being Scott Eastwood.
An exclusive source close to the actor let Just Jared know Eastwood "is one of five actors being considered." Whether Jamie Dornan (or, yes, even Matt Bomer) are among the selected five is not yet known. Eastwood, however, is a fair choice. He's certainly got the swoon-worthy looks paired with a menacingly boyish charm. Had he been around when we first brainstormed actors, he'd for sure have topped our list.
The fact that he's relatively unknown, aside from being the ridiculously good-looking son of Clint Eastwood, could benefit the franchise as a whole. He doesn't carry the celebrity-gossip baggage that Robert Pattinson and Kristen Stewart did as the Twilight franchise grew, so an audience could watch him on-screen and only see Christian Grey. Of course, he runs the risk of forever being his 50 Shades character, but — let's face it — that wouldn't be the worst thing in the world. (Just Jared)
TV Shows
After What Happened In Season 3, Good Girls Has A New Mi...
Fans might have been disappointed when Good Girls season 3 ended five episodes early, but on the flip side, this means that season 4 of Good Girls will pic
by Lydia Wang
Movies
Say What You Will About Coming 2 America — But At Least Li...
Coming to America is usually found on lists featuring great comedy movies or Eddie Murphy’s best roles, but it is rarely praised for being a romantic com
by Ariana Brockington
TV Shows
WandaVision’s Second Post-Credits Scene — & Its Poss...
Warning: Spoilers for the WandaVision series finale are ahead. The Marvel Cinematic Universe has perfected the art of leaving the audience wanting more, an
by Leah Marilla Thomas
Movies
Raya And The Last Dragon’s Voice Cast Is Full Of A-L...
by Olivia Truffaut-Wong
Pop Culture
Kim Kardashian Reacts To Framing Britney Spears By Calli...
The release of the FX-Hulu documentary Framing Britney Spears, has prompted a collective reckoning on some of the damaging ways the public and media h
by Natalie Morin
Entertainment
Raya & The Last Dragon Introduces Disney’s First Sou...
There’s a lot riding on Disney’s newest animated film, Raya and the Last Dragon, which introduces the studio’s first Southeast Asian prin
by Olivia Truffaut-Wong
Movies
Coming 2 America Has A Massive Cast & So Many Cameos
by Ariana Brockington
Music
Every Song In Coming 2 America — From Parodies To New Mega...
by Ariana Brockington
Entertainment
Meghan Markle’s Suits Husband Has Some Strong Words For He...
As the world anticipates the Meghan Markle and Prince Harry’s tell-all exclusive interview with Oprah Winfrey, the former Duchess of Sussex can rest easy
by Ineye Komonibo
TV Shows
Merci, Netflix! Lupin Is Coming Back Sooner Than You Think
Note: This article contains spoilers for Lupin.  Normally, ripping through a delicious new TV show means having to contend with an especially cru
by Natalie Morin
Movies
Coming 2 America Tries To Be Nostalgic & Woke — In The End...
This story contains mild spoilers for Coming 2 America, now streaming on Amazon Prime Video. Since the premiere of Coming to America in 1988, the movie has
by Ineye Komonibo
Pop Culture
Paris Hilton Accepts Sarah Silverman’s “Genuine”...
Following Sarah Silverman’s recent apology to Paris Hilton for a joke she made at her expense 14 years ago, Hilton has said that she is ready to to &
by Natalie Morin
Discover
R29 Stories & News
Watch
R29 Original Series & Films
Shop
R29's Most Wanted