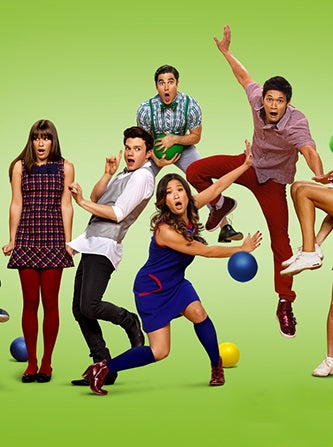 Photo: Courtesy of Fox.
It was only last week that Glee officially bid farewell to their star quarterback, and today news broke that the entire cast will bid farewell next year. Ryan Murphy confirmed that the musical primetime saga, with the ability to break our hearts and make us dance simultaneously, will end after its sixth season.
"The final year of the show, which will be next year," Murphy said, "was designed around Rachel and Cory/Finn's story." Since the show's conception in 2009, Murphy has known exactly how the show was going to end. Rachel and Finn would share the last scene of the last episode of the last season, and that would be that. However, due to Monteith's untimely death, real life has flipped the script. When a tragedy like this happens, Murphy added, "you sort of have to pause and figure out what you want to do, so we're figuring that out now."
Broadway World thinks it might not be the right time to bow out as Glee has seen a spike in ratings, but audiences have mixed feelings. Some say the story line is becoming repetitive and others believe it to be too much of a fantasy. Murphy, however, is sticking to his creative guns. The show will continue riding high towards the end of its current fifth season and make its final curtain call in 2014.
Advertisement
Movies
Pixar’s Onward Will Give Disney Its First Animated LGBTQ+ Charact...
Diversity is still not great in the film industry, especially for LGBTQ+ movie characters, but Disney is continuing its efforts to change that. Recently, t
by Tara Edwards
Entertainment
Amanda Bynes Plans To Challenge Her Conservatorship In Court
Amanda Bynes says she is planning to challenge her long-standing conservatorship over expensive restrictions on her mental health treatment. Bynes shared a
by Sarah Midkiff
TV Shows
The True Story Behind Jordan Peele & Amazon’s 1970s Conspir...
Amazon Prime’s new conspiracy thriller set in 1970s America called Hunters that only gets crazier when you take into account that it is supposedly ba
by Sarah Midkiff
Pop Culture
Kristen Bell Explains Why She Thinks Dax Shepard Isn’t Her Soulmate
Kristen Bell has given us great love advice over the years, and recently she revealed that the best way to approach relationships is to first make sure you
by Tara Edwards
TV Shows
Love Is Blind’s Giannina Says She Is A “Soulpreneur” — But...
While we eagerly await the final episodes of Netflix’s latest foray into reality television, Love is Blind, we have been looking into the lives of the co
by Sarah Midkiff
TV Shows
Schitt’s Creek Star Annie Murphy Is Stepping Into A ...
Annie Murphy blessed us with the catchphrase of a lifetime with “Ew, David,” and now the Schitt’s Creek actress is poised to give us another one
by Tara Edwards
Music
BTS Reveal What Matters Most To Them In The Lyrics For “ON&...
BTS leader RM summed up the theme of their newest album, Map of the Soul: 7 best during the septet’s appearance on the Today Show in New York City. &
by Natalie Morin
Entertainment
The First Look At The Batman Reveals Robert Pattinson’s ...
Bat-fans, to the Batmobile! New photos and footage from the set of The Batman film have been leaked for all to enjoy. While it is not as juicy as Robert Pa
by Tara Edwards
Amazon
Hunters’ Batsh*t Finale, Explained By The One Person Who...
Warning: The most major spoilers ahead for Amazon Prime’s Hunters season 1. There is an anxiety hanging over Hunters’ season 1 finale, “Eilu v’
by Ariana Romero
Entertainment
The American Idol Auditions Got Off To A Scary Start For K...
Um, remember when the mortifying performances of way-too-confident hopefuls was the most talked-about thing during the early episodes of American Idol? The
by Kaitlin Reilly
Music
The Songs You’re Hearing All Over TikTok In 2020
by Kathryn Lindsay
Pop Culture
Royals No More: Meghan Markle & Prince Harry Officially Drop The ...
Meghan Markle and Prince Harry’s decision to step back from their duties as senior members of the royal family now includes dropping the Sussex Royal tit
by Kaitlin Reilly
Discover
R29 Stories & News
Watch
R29 Original Series & Films
Shop
R29's Most Wanted